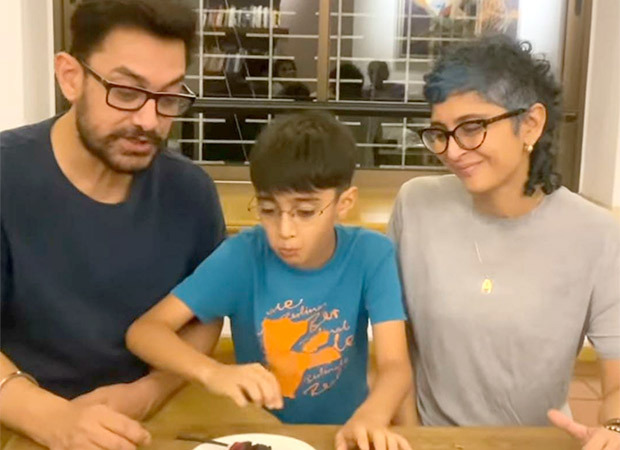 B-Town couple Aamir Khan and Kiran Rao decide to part their ways and officially announced it earlier this year in July. Their divorce came as a shock for everyone and created havoc in everyone’s mind. Recently, the couple grabbed eyeballs again as they reunited at son Azad’s birthday bash. Aamir and Kiran’ son Azad turned 10 this year.

The glimpses of the party were shared by Aamir’s close friend, author and columnist, Shobhaa De. Shobhaa took to her Instagram handle to drop a bunch of pictures. In the pictures, Aamir can be seen in simple attire comprising of a blue t-shirt, beige pants and wooden shade boots. He can be seen enjoying the party and sipping some drinks and enjoying homemade food. While Kiran and Aamir can be also seen cutting cake together with Azad. Sharing the picture Shobhaa wrote, “A warm and wonderful evening with scrumptious ghar ka khaana.”

On the professional front, Aamir Khan is all set for the release of the much-awaited film Laal Singh Chaddha. The film has been slated for a theatrical release on April 14, 2022. Helmed by Advait Chandan, this movie is the official adaptation of the Hollywood film Forrest Gump. The film also stars Kareena Kapoor Khan opposite him.

ALSO READ:Aamir Khan finally opens up about the postponement of Laal Singh Chaddha and its clash with the Yash starrer; says, “I profusely apologised and explained my predicament”