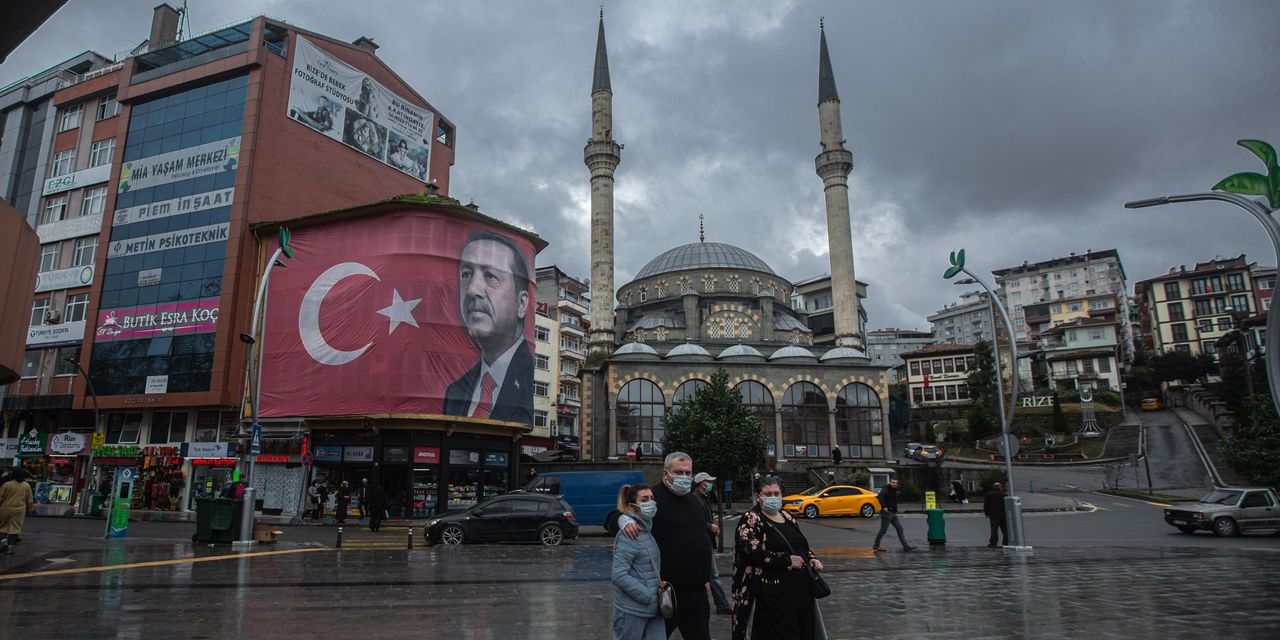 hometown on Turkey’s Black Sea coast, residents are questioning the leadership of their city’s favorite son amid an economic crisis that is driving up the cost of food, gasoline and medicine.

Turkey’s currency has lost as much as 45% of its value this year, largely triggered by Mr. Erdogan’s own economic policies, economists and former Turkish officials say. The crisis has sparked outrage among poor- and middle-class Turks who have made up Mr. Erdogan’s power base for nearly two decades but are now turning against him in record numbers, opinion polls show.

The currency collapse has hit especially hard in Rize, with rising costs of fertilizer and raw materials undercutting the farming of tea, the region’s main product and the lifeblood of its economy. Residents and political observers here say the president’s Justice and Development Party, known as AKP, is losing support even in a city that has long prided itself on its connection with Mr. Erdogan who spent his early childhood here.

“I am asking the AKP people, aren’t you afraid that you won’t get elected? The people, the tea producers are suffering here” said Nevzat Palic, the head of Rize’s Chamber of Agriculture, which represents 50,000 farmers.

Mr. Palic, a suited and mustachioed man whose office in Rize is decorated with photos of him sitting with Mr. Erdogan, picked up another photo from his desk, a recent image of him shaking hands with

the leader of Turkey’s largest opposition party, a sign of his discontent with the government.

“Until now people always voted for the AKP because our president is from Rize, but in those years they didn’t suffer so much. The last two years have been very bad for the citizens,” he said.

Turkey’s economic troubles are largely the result of Mr. Erdogan’s own policies, economists say. After firing a series of top officials who disagreed with him, the president has pressured the central bank into cutting interest rates despite high inflation, part of an unorthodox strategy he says is designed to encourage exports and economic growth.

The situation worsened Monday when the lira plunged to a record low during an investor selloff triggered by comments from Turkey’s finance minister that raised concerns that the central bank could cut interest rates again when it meets on Dec. 16. The central bank then intervened to arrest the lira’s slide, selling foreign currency for the fourth time in recent weeks.

Central banks normally raise interest rates to control inflation. In Turkey, inflation stood at more than 21% in November according to official figures. Mr. Erdogan’s strategy has also sparked a dizzying slide in the lira, which lost some 30% of its value in November alone.

“We know where we are going, I ask our people to be patient,” Mr. Erdogan said in a televised address Wednesday.

The currency’s collapse sparked protests in cities throughout the country and is fueling discontent with the government throughout Turkey. MAK, a pro-government political consulting firm, said the AKP’s vote share sunk below 30% for the first time ever, in a survey released this week. The ruling party won 42% of the vote in Turkey’s most recent parliamentary election in 2018. Mr. Erdogan won 52% of the vote in the presidential election the same year.

Even in a conservative, nationalist-leaning district like Rize, where Mr. Erdogan’s face is everywhere, plastered on lampposts and highway overpasses, the economic crisis is pouring pressure on ordinary people. The city is surrounded by thousands of small family tea farms, tiny green estates draped on the mountainsides where producers complain they must now pay more for fertilizer and raw materials.

“We are at the bottom of the well. We have no purchasing power left,” said Mehmet Alibaris, whose tea farm near Rize has been devastated by inflation. The cost of fertilizer is up 33% this year and labor costs have doubled, he said. “I’ll vote for anyone who will get rid of this government.”

Hasan Kasap, the head of Rize’s tea producers’ association, said farmers could handle the current economic situation for another four or five months. “But if it continues like this, there will be a collapse,” he said.

In Rize, Mr. Erdogan may be counting on his personal connection to the area, as well as a history of helping the city’s economy through government largess. Just outside the city, workers are building a large new airport along the Black Sea.

Mr. Erdogan survived a military coup attempt in 2016, weathered a previous currency crisis in 2018, and has managed to win elections repeatedly by outflanking Turkey’s disparate opposition. Some economists predict he will use government spending to try to temporarily relieve the pain of the current crisis and revive his chances in the next election. He has also attempted to blame the crisis on foreign powers in an attempt to whip up nationalist sentiment, according to those who know the president.

“He is trying to create a perception that the economic problems are due to an attack of foreign powers by using the ‘economic war of independence’ rhetoric, but this doesn’t work anymore,” said Mustafa Yeneroglu, a member of parliament who recently split with Mr. Erdogan’s party. “There are no more rabbits left in his hat.”

What do you think the future holds for President Erdogan and the people of Turkey? Join the conversation below.

The ruling party’s sinking poll numbers are fueling optimism among the Turkish opposition that they can unseat Mr. Erdogan and his government for the first time, despite two decades in which the AKP has weakened state institutions, expanded its control over the Turkish media and defeated opponents in a series of elections.

Mr. Erdogan, who has been elected twice to the presidency, is subject to a two-term limit under Turkey’s constitution. However his advisers say he will run in the country’s next election in 2023, arguing that his current term is his first since the country amended the constitution to transition to a presidential system of government in 2017. The government has rejected calls from the opposition for early elections.

“Mr. Erdogan does not have a problem according to the two-term limit,” said Mehmet Uçum, a chief legal adviser to the president, in written comments to The Wall Street Journal.

The opposition has formed a six-party alliance dedicated to defeating Mr. Erdogan and stands to benefit from two new parties led by former AKP officials who split with the president.

“I used to get a lot of phone calls from friends in the AKP saying, ‘You sold out the cause, you deserted our chief, you betrayed us,’” said Omer Lutfi Koroglu, a former AKP supporter who leads the Rize branch of one of those parties, Democracy and Progress.

“Now, after all these economic problems, they understand why we left the AKP. Now they’ve started to say, ‘you were right.’”