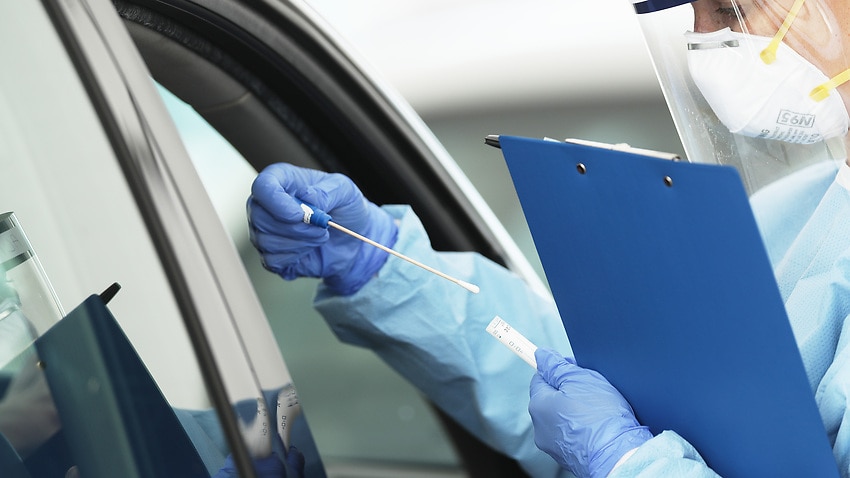 There were another two deaths in the state, with 516 patients in hospital – a rise of 25 – while there are four more patients in intensive care, taking the total to 108.

The ACT and Tasmania also recorded a one-day high of new cases, registering 926 and 702 cases respectively.

Queensland also had a record amount of cases, with 5,699 new infections reported on Tuesday.

Private pathology provider Clinpath has closed four of its testing clinics across the state after it announced it has to prioritise its aged care facilities.

But Premier Steven Marshall reassured SA residents that state-run testing clinics have the capacity to control the current testing rates, which have soared to 20,000 overnight.

“SA pathology stands ready to make up that volume that we can lose through the private lab,” Mr Marshall told reporters on Tuesday.

“In terms of the numbers and what we’ve seen in South Australia over recent days is that we certainly have the highest testing rate per capita in the country,” he said.

“If there is any pathology service in Australia which is capable of picking up the slack it is SA Pathology.”

But SA Labor MP disagreed, saying wait times for people who have done PCR tests are still too long.

Sorry Premier, wait times in SA are up to 5 days. A constituent contacted me today saying she had her PCR test last Thursday and received her results today!

Mr Marshall said 30 to 40 per cent of those in hospital are not fully vaccinated, leaving unvaccinated people overrepresented in hospital figures.

As people struggle to get a rapid test, leading to long queues at PCR testing sites, medical experts have slammed government inaction to secure enough tests to meet demand.

“There is an inability to supply at the critical moment and there is a lack of equity of access and it is costing so much,” he told ABC Radio on Tuesday.

COVID-19 PCR testing sites are inundated in many parts of Australia. Source: AAP

“The case numbers from Omicron is way outside those of Delta … these numbers are way outside of what people were expecting and this day was always going to come.

“We need rapid antigen tests in play and in people’s hands.”

Opposition Leader Anthony Albanese lashed out at the government’s handling of the issue, calling for greater access to rapid tests.

“The fact is this government is responsible for the largest public policy failure in Australian political history,” he told reporters on the NSW Central Coast.

“Australians are being told, ‘You’re on your own and go out and get a rapid antigen test’, but they’re not available in so many areas.

“If people are lucky enough to find one, they’re not affordable. And for many people, it’s simply pricing out access to important healthcare.”

While Mr Albanese has not called for the tests to be made free, he has urged the government to make them more affordable.

Nationals senator Matt Canavan has levelled blame of the shortages at the Therapeutic Goods Administration (TGA), saying questions needed to be asked about why rapid antigen tests were not approved for use until two months ago.

“The hold up was at the feet of the TGA,” he told Sky News on Tuesday.

“We should have been better prepared for this.”

Senator Canavan said making the tests free would exacerbate the issue, sparking an increase in demand.

The rapid antigen test shortage coincides with the expansion of the country’s booster program, with an extra four million people becoming eligible for it from Tuesday.

The gap between second and third doses has been reduced to four months, and will shorten to three at the end of January.

The head of Australia’s vaccine rollout, Lieutenant-General John Frewen, said 60 per cent of people already eligible for the third dose have received it.

“We’ve had 2.5 million people come forward for their booster … given it’s Christmas and New Year, I think that’s encouraging,” he told the Seven Network.

Children between five and 11 years are also set to get the vaccine from 10 January.