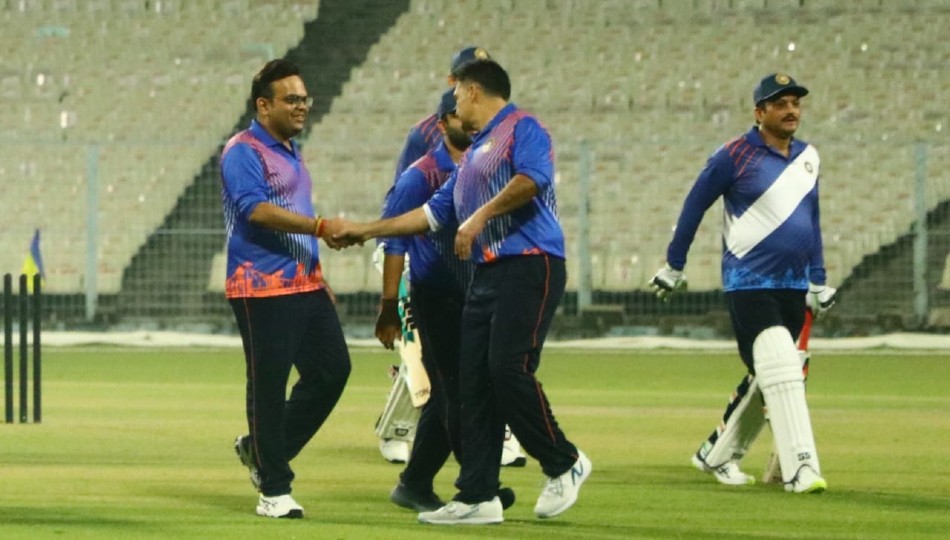 The 15-overs-a-side match at the Eden Gardens, held on the eve of the Board’s AGM, had its share of nostalgia.

Playing the role of a finisher, Ganguly, who batted at No. 6, smashed two sixes and four boundaries en route to a 20-ball 35. He had to retire – as per the rules of the match – and his team fell short by just a run.

At Ganguly’s home ground, it was the BCCI secretary Shah who did the star turn, picking 3/58 with his seven overs of spin bowling to defend 128 on a nippy December evening.

His wickets included that of Mohammad Azharuddin, one of Eden’s favourites, who was trapped lbw for 2. Shah also dismissed Suraj Lotlikar of Goa Cricket Association.

There was a third blow, without any addition to the total, in the first ball of the next over when Cricket Association of Bengal president Avishek Dalmiya, who opened the batting, was run out for 13.

Then came the city’s favourite son Ganguly who batted with his usual elegance as he drove and cut on the off-side and sent two balls out of the ground with his trademark step- out shots to race to 35.

Earlier, electing to bat, BCCI Secretary’s XI rode on a 92-run partnership between Arun Dhumal (36) and Jaydev Shah (40) to post 128 for three in the stipulated overs.

Azharuddin and Ganguly shared the new ball and bowled 10 overs between them. Ganguly returned with 1/19 from his 3 overs, taking the wicket of Pranav Amin, while Azharuddin had figures of 2-0-8-0.