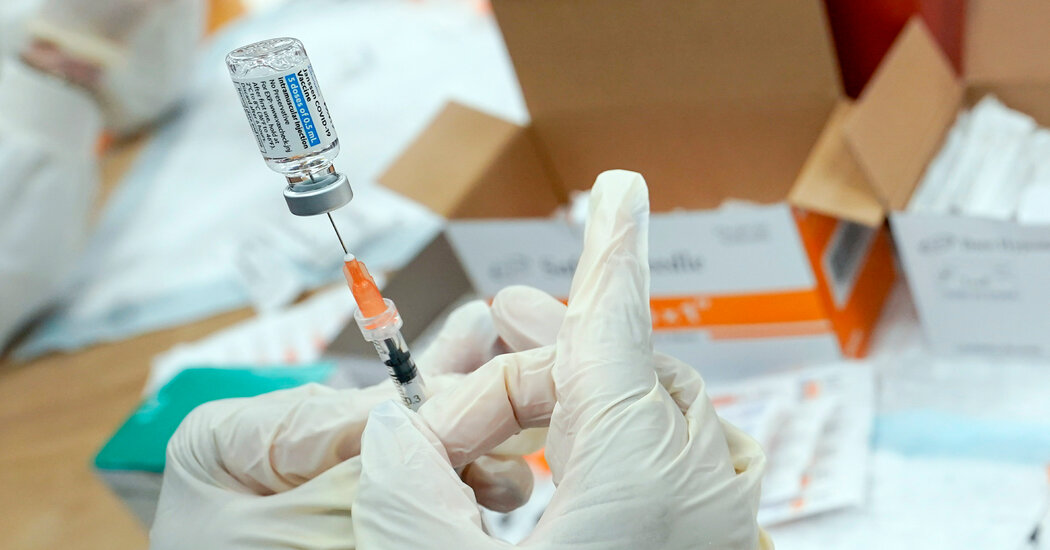 The Centers for Disease Control and Prevention on Thursday recommended that Covid vaccines other than Johnson & Johnson’s should be preferred, after its advisers cited increasing evidence that the company’s shots can trigger a rare blood clot disorder now linked to dozens of cases and at least nine deaths in the United States in the last year.

The decision adopted a recommendation by an expert panel that effectively discouraged vaccine providers and adults from using Johnson & Johnson’s shot. New data showed that there was a higher risk for the blood clotting condition than previously known. The risk was greatest among women aged 30 to 49, estimated at 1 in 100,000 who had received the company’s shot.

Johnson & Johnson’s vaccine is not being removed from the market. It will remain an option for people who are “unable or unwilling” to receive the more popular shots from Moderna or Pfizer-BioNTech, the agency said.

The recommendation is the latest setback for a vaccine which has largely fallen out of favor in the United States. The company’s vaccine has not fulfilled its early promise as a traditional, one-and-done format that would be easy to deploy in more isolated or rural communities, and among people skittish about receiving two doses.

Earlier this week, the Food and Drug Administration issued updated guidance on the risks of the blood-clotting disorder linked to Johnson & Johnson’s vaccine, but reiterated that the benefits outweighed its risks.

Dozens of countries have authorized Johnson & Johnson’s vaccine and have been using it as part of their immunization campaigns. But while it remains in high demand in some parts of the world, it has lost popularity in many countries because of safety concerns and its relative lower effectiveness against Covid..

Some governments have already moved to put restrictions on Johnson & Johnson’s shot because of the blood clotting risk. Finland, Denmark and Slovenia stopped using it, and several other nations have ranked it lower for use than Pfizer-BioNTech and Moderna’s vaccines. Some countries also have advised doctors to counsel women under 50 of the potential risk.

The C.D.C. panel’s recommendation lands in the midst of a surge in virus cases driven by the Delta coronavirus variant and Omicron, the latest version that has already become dominant in some countries and is spreading fast in Britain and the United States.

Several laboratory experiments suggest that a single dose of Johnson & Johnson’s shot may offer little defense against infection with Omicron. The company said late last month that it was testing blood samples from clinical trial participants who have received its shot as a booster to see how their vaccine-induced antibodies fare against Omicron.

At Thursday’s meeting of the Advisory Committee on Immunization Practices, C.D.C. officials went into detail on the clotting-related syndrome identified in 54 people in the United States who received the shot before the end of August. Overall, the rate of the condition was 3.8 cases per one million people given the vaccine.

People who received a Johnson & Johnson shot months ago are not thought to be at risk for the clotting condition, since the onset of symptoms typically occurred about nine days after vaccination in the diagnosed cases.

One panelist, Dr. Pablo Sanchez, a pediatrician at Ohio State University, said he had steered families away from the Johnson & Johnson vaccine.

Evidence has increasingly shown that one dose of Johnson & Johnson’s shot offers much less protection against infection than other vaccines. Federal health officials in October authorized boosters for people who had received a single shot of the company’s vaccine at least two months earlier. They allowed for a “mix and match” approach, allowing people to get a second shot of a Pfizer or Moderna vaccine.

Despite their recommendation, a number of panelists said it was important to keep Johnson & Johnson’s vaccine available as an option.

“It’s really important, though, that we not completely eliminate this vaccine,” said Dr. Jason Goldman, an assistant professor of clinical biomedical science at Florida Atlantic University.

Dr. Penny Heaton, a Johnson & Johnson executive , said the vaccine is making a “crucial difference” in the pandemic response. “We are confident in the positive benefit-risk profile of our vaccine. It is saving lives here in the U.S. today and on every continent around the globe,” she said.

In April, soon after Johnson & Johnson’s vaccine started being administered in the United States, federal officials briefly halted use of the shot because of concerns about the risk of blood clots. Cases have continued to accumulate.

Of all 54 Johnson & Johnson vaccine recipients diagnosed with the condition before the end of August, 36 were admitted to an intensive care unit and the longest hospital stay was 132 days. Eight of them died. Since September, a ninth person has died.

“We’ve been struck from reviewing these cases by how rapidly the status deteriorates and results in death,” Dr. See said.

The people who died ranged in age from 28 to 62. Seven were women, and all were white. Obesity was the most common underlying medical condition. Two of the people who died did not have known medical problems, Dr. See said.

The rate at which the condition would normally be expected in the general population is not known, said Dr. Isaac See, a C.D.C. official.

Dr. See said additional cases had been identified since earlier C.D.C. meetings because of lags in reporting and delays in identifying and confirming illnesses related to the vaccine.

On Thursday, C.D.C. officials also reported on side effects among children aged 5 to 11 who have received the Pfizer vaccine in the last several weeks. With 7.1 million doses administered, the C.D.C. confirmed eight cases of myocarditis, or swelling of the heart muscle, and has an additional case under review. It is following up on an additional five cases.

It was previously reported that males between 16 and 29 years had a heightened risk of developing myocarditis. Nearly 11 out of every 100,000 of them developed the condition a few days after being fully vaccinated. On balance, it was estimated that for boys 12 to 17, the shots would cause an estimated 70 myocarditis cases but prevent 5,700 infections, 215 hospitalizations and two deaths, the C.D.C. said. But most recovered within a short period of time.

Among the six cases in younger children with known outcomes, five recovered from the myocarditis symptoms. The eight confirmed cases were evenly split between males and females.

In the summer, the F.D.A. warned that Johnson & Johnson’s vaccine also could lead to an increased risk of a rare neurological condition known as Guillain-Barré syndrome, another setback.

A C.D.C. presentation showed that despite the clotting concerns, the Johnson & Johnson vaccine prevented thousands of U.S. Covid hospitalizations compared to three to a dozen cases of the clotting syndrome, depending on the age group. Those over 64 avoided the most hospital stays. Like those immunized with other vaccines, thousands avoided hospitalization, the agency said.