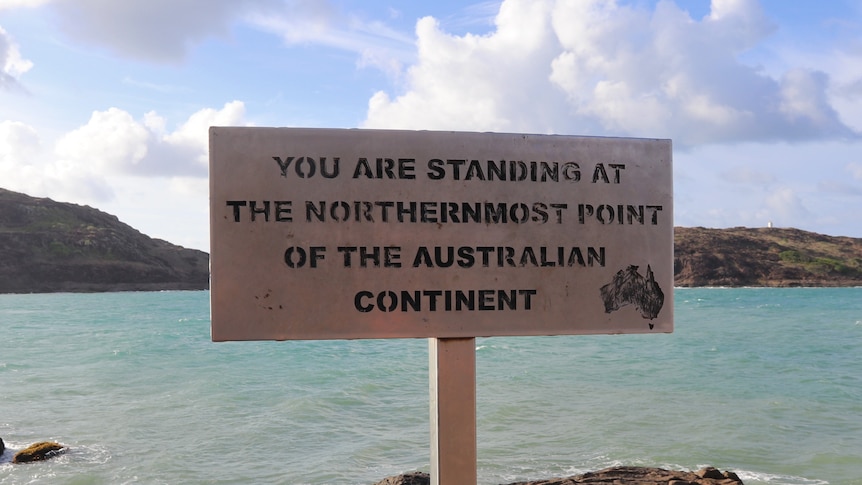 Visitors to the northernmost point of the Australian mainland may soon need to be accompanied by a ranger to the site after increasing graffiti and vandalism attacks has caused upset among the Tip’s traditional owners.

Pajinka, the tip of Cape York, is an iconic location and a bucket-list destination for many but the effect of growing visitor numbers, vandalism, and reports of human defecation and nudity at the site have left traditional owners close to closing it to tourism.

Gudang Yadhaykenu Aboriginal Corporation chair Michael Solomon the actions of a few is “disrespecting the traditional owners, even our ancestors. It makes us very upset. It hurts us, makes us sad.

“I mentioned to close the Tip to tourism because of graffiti and toilet mess in the scrub, but mainly the memorial plaque.”

“When we walk on our country, we know where all plants and trees, rocks and stones are,” Mr Wymarra said.

“For me to go up to the tip, to Pajinka, and to see the actual rock slates missing and the big rock slates that have been knocked off or kicked off, it’s not on.

“That’s taking a part of our cultural heritage away from us.”

Piles of loose or dislodged rocks have been built, while trees have been etched with deep carvings of visitors’ names and initials.

For Mr Thompson-Wymarra’s son, Jarrah, nudity is another growing problem.

“They were shocked … they did not expect that because Pajinka isn’t the place where you can come and do that.”

Tourist Shayden Sievers made the trip to Pajinka earlier this year and was surprised by how popular the route had become.

“Pretty well most of the signs from Lakefield up, there’s graffiti, there’s stickers, there’s even signs run over and shot at,” Mr Sievers said.

“On the beach next to the tip itself, there’s people that have done doughnuts and burnouts and all the rest.”

The road to Pajinka is four-wheel-drive-access only, prone to corrugation and flooding at certain times of the year.

The medical director of primary health care at Bamaga Hospital, Dr Inika Weaver, said this year there were more presentations from car accidents at the Tip.

“Here on the tip of Cape York, we’re limited in what resources we have in our hospital. We have a limited number of X-rays that we can do here,” Dr Weaver said.

Reaching the tip itself has its own hazards. It requires walking across sand flats and, if the trip is not timed well, the incoming tide could leave visitors stranded.

“For them to do one wrong thing or take the wrong track or wear the wrong footwear, they could very badly hurt themselves,” Mr Wymarra said.

Gudang Yadhaykenu rangers and a security company have been tasked with protecting the site.

“We wanna fix that up so their children follow their footprints up to the tip,” Mr Solomon said.

“Make everything balance across for our generation and their generation, for future tourists.”

From next year, the corporation — which took over management in 2019 — intend to charge a fee for visitors, who must walk to the tip with a ranger.

While Pajinka comes under the jurisdiction of the Torres Shire Council, Mayor Vonda Malone says the 13 councils in the Northern Peninsula area will work together to protect the site.

“It’s been highlighted over the years most definitely,” Mr Malone said.

“This is a very complex area where it verges on a number of parties to look at how we can best provide resources to manage the area better because it is of importance for the whole nation, not just within our area of Torres Shire and Northern Peninsula area.”

“There are people who will always think that they shouldn’t have to pay,” Mr Costello said.

He points to Uluru and his own Quandamooka Country [covering Moreton and Stradbroke Islands] as exemplary models.

“What this does is actually empower First Nations people to tell their stories and talk about country and explain the connectedness and it helps to educate people,” Mr Costello said.

“It’s actually providing a really richer, in-depth layer to our tourism in Queensland which is being embraced by the industry.”

“As the year of Indigenous tourism comes to a close, we should start embarking on the 10 years of investment in Indigenous tourism, so that when the eyes of the world are upon us in 2032, we are the premier state in Australia and a global hotspot for culturally appropriate tourism,” he said.

Travellers such as Katie Brown from the Gold Coast, who has been home-schooling her three sons on the road said she was willing to pay for a special experience.

“Places that show you or can teach you or educate you about the area, a lot of the things that you wouldn’t know,” Ms Brown said.

“They are fantastic and so good for education for the children as well, to learn to respect and understand the culture behind the place.”