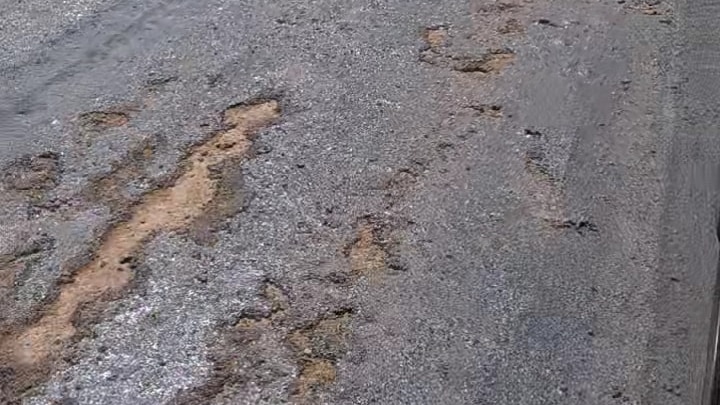 South Australian motorists are calling for urgent works to repair an important freight road, just months after it was resurfaced.

Kingston Road connects the town of Loxton to the Sturt Highway – the region’s major freight route – and is used by trucks transporting produce to Adelaide and to the eastern states.

In April, the South Australian Department of Infrastructure and Transport (DIT) completed resurfacing works on the road worth $455,000.

But last week, motorists reported the road had deteriorated to a worse condition than before it was resurfaced.

At least one motorist said he has black tar splatter on his white car, and both road users and the Loxton Waikerie Council have expressed concerns about safety.

“The road’s been a failure since it was laid,” Kingston-on-Murray resident Alex Riley said.

“(It) wasn’t even two days and it was failing apart. All along the fog line was all rutted out.

“They just laid the road straight over to top off the holes and the road’s so thin it’s just melted away with our warm weather.”

The deterioration has come during the region’s grain harvest, with trucks travelling up and down the road carting grain.

“I would say looking at it now… most of the section they laid down… that there’s problems with it all the way along,” Mr Stasinowski said.

“I just think it was a job that wasn’t done properly in the first place unfortunately and looks like it’s going to have to be redone.”

DIT attributed the damage to high temperatures in the Riverland during last week and an increase in heavy vehicle traffic due to the ongoing grain harvest.

Temperatures in the Riverland peaked last week at 38 degrees Celsius on Wednesday, in a region known for its hot summers.

“Maintenance teams have undertaken temporary works to prevent further damage, and a long-term fix is expected to be completed in coming weeks,” a DIT spokesperson said.

“Speed restrictions of 40 kilometres an hour are currently in place at the intersection of Kingston Road and Stott Highway to allow for works to safely be completed.”

Federal Liberal Member for Barker Tony Pasin said the department’s explanation for the road’s condition was a “shocker”.

“These roads need to be built fit for purpose and it’s obvious that on a rural road as significant as this one there are going to be heavy vehicles traversing,” Mr Pasin said.

“I would happily speak to the person at the state department of transport who prepared that press release because, to call a spade a spade, that’s a complete shocker.”

“That’s a ridiculous notion and I don’t think that will cut the mustard.”