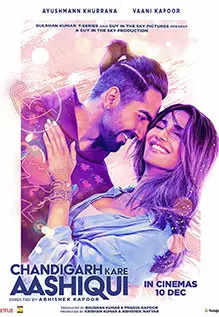 STORY: Manvinder Munjal aka Manu (Ayushmann Khurrana) is a fitness enthusiast who owns a gym, and a bodybuilder who competes year on year to win the local championship. While he’s focused all his energies on sweating it out and building his dole-shole for that (with little luck), his gym business sees far and few footfalls. Until walks in, the head-turner, Maanvi Brar (Vaani Kapoor), the gym’s newly appointed Jhoomba (read: Zumba), instructor. Soon enough, sparks fly and the two are drawn into a passionate relationship. But there is more to Maanvi than the gorgeous woman that she is. And that forms the crux of the story.

REVIEW: Love stories are love stories after all. Mostly, boy-meets-girl, some romance, mush-gush, conflict, makeup or breakup, and end of the story. Well here, boy does meet girl, too, but she has a past (not the cliché affair, marriage, child out of wedlock or criminal history), that becomes hard for Manu, with all his machismo, to bear. Without giving away much (Story Idea credited to Simran Sahni), let’s say that Maanvi has courageously battled all odds, and ‘transformed’ into a new person, someone she has always pined to be. While she feels liberated and is proud of her new identity, and one that’s true to her real self, will society and her family embrace her choice and accept her for what they call, ‘not normal’ in their very normal world.

Director, Abhishek Kapoor, doesn’t beat around the bush and gets to the point directly and quickly. After introducing Manu, his friends and his family, he lets us into Maanvi’s world, slowly and subtly revealing her past. While preparing us for Maanvi’s revelations, he’s also readying us for Manu’s initial disbelief, shock and horror at discovering more about the girl he’s so intensely in love with. And when the moment arrives, he handles it finely, without too much dramatisation or theatrics – in performance or dialogues.

While Abhishek maintains light-hearted humour in most situations, he handles the hard-hitting reality of the subject with sensitivity and maturity. He lays it all out – people’s crude and outrageous reaction on learning the truth about the subject, our general lack of knowledge and information on a matter that needs to be addressed, and the way our society is sharply divided on the concept of being ‘inclusive’, and giving every individual the liberty to be who they are and what they want to be. Abhishek does it with tact and weaves in humorous punches – soft and gentle, nothing too heavy-weight. Credit also goes to Supratik Sen and Tushar Paranjape for their honest and relatable screenplay and dialogues, which is evident in several scenes. Be it the Munjal family pushing Manu’s to get married, his widower father (Girish Dhamija) waiting to marry his Muslim girlfriend, Maanvi’s father (Kanwaljit Singh) being supportive of her choices even though her mother strongly disapproves, or Manu’s over-the-top sisters meddling in all of Manu’s matters—there is never a dull moment, almost all scenes as tight as Manu’s six-pack and bulging biceps.

The performances here are ‘tip-top’! Ayushmann Khurrana gets into the skin of the character (literally!). Watch out for his superphysical makeover. He portrays Manu perfectly, and well, that fact that he’s in reality a Chandigarh boy, must have surely helped crack it. He looks, walks and talks the part.

Vaani Kapoor sinks her teeth into her character from the word go and gives a no-holds-barred performance. Vaani and Ayushmann not only look great together, but also share fiery chemistry onscreen.

In a post Covid era, where we are grappling with what’s the new normal every day of our lives, it’s time we dig deep and question what is ‘normal’ really. Have we self-created norms and normalcy, to feed the needs of few in the world who are trapped in this false sense of what is normal? Isn’t it time to shake things up a bit, move out of the comfort zone and break the shackles of stereotypes? Chandigarh Kare Aashiqui does that, while still leaving you comfortably entertained.