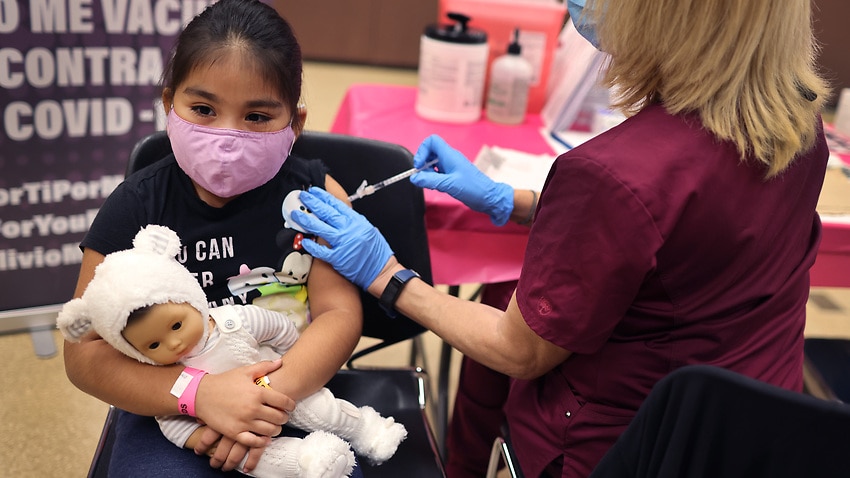 “We are working with states and territories about what arrangements are in place, like school-based vaccines, but at the moment we will have the capacity to get all the cohort dosed early in the new year.”

It comes after Australia’s medical regulator approved the Pfizer vaccine for five to 11-year-olds.

While the final timings of the vaccine are yet to be determined, it’s expected vaccines could commence for the age group from 10 January.

Final approval will still need to be granted by the country’s leading body on vaccinations.

The co-chair of the Australian Technical Advisory Group on Immunisation (ATAGI), Professor Christopher Blyth, said the body would hand the findings to the government imminently.

“ATAGI is finalising its advice this week,” he said.

“We have looked at the safety data very carefully, because the risk benefits are different in this group compared to older people.”

The recommendations are expected to include timings on how long five to 11-year-olds would need to wait before they get their second dose.

While the length of time between doses for the Pfizer vaccine is three weeks, ATAGI is looking at whether a longer time frame, such as eight weeks, would be needed.

Chief Medical Officer Paul Kelly also told the committee he was reassured by data coming out of the United States on child vaccinations.

The US approved vaccines for five to 11-year-olds earlier this year, with more than five million children now being vaccinated.

Following a call with American infectious disease experts, he said reported side effects of the vaccines in children were “very minor and not unexpected”.