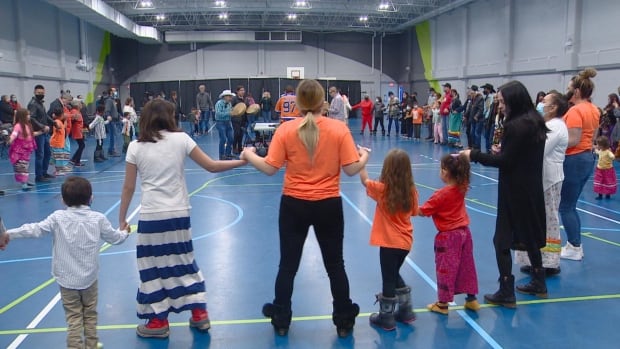 Indigenous people came together at a Cree Nation round dance Saturday to honour children who died at residential schools, survivors, and Indigenous children currently in foster care.

Enoch Cree Nation, just southwest of Edmonton, hosted an “Every Child Matters” round dance. The event also featured a pipe ceremony and feast.

“We’re honouring [children of] the past, the present and the future,” said Troy Adams, a Paul First Nation elder and children’s services advisor.

“There are a lot of people out there who are lost.”

More than 150,000 Indigenous children were forced to attend residential schools, a government-sponsored school system designed to assimilate them to Eurocentric ideology and society.

Many children were abused by the religious leaders running the institutions. Survivors have also told of schools that were overcrowded, where diseases transmitted rapidly and many children were malnourished.

In 2015, the Truth and Reconciliation Commission estimated at least 3,200 Indigenous children died at residential schools. But commission chair Murray Sinclair said the number may be more than 6,000.

The children who did not make it home are the children of the past, Adams explained.

“We didn’t forget about you… We’re here to honour that you didn’t come home — you went on to the spirit world,” he said.

The children of the present, he said, are the survivors of residential schools, day schools — similar to residential schools, except they were in the community and children could go home each day — and the Sixties Scoop — when Indigenous children were taken from their homes and communities and placed into the child welfare system in the 1960s.

The children of the future are those currently in the child welfare system, who were taken away from their families, he said.

Numbers show that Indigenous children have been overrepresented in the child welfare system for decades. In Alberta, as of September, 71 per cent of children and youth in care were Indigenous, according to a quarterly report on child intervention statistics from the provincial government.

Yet, about 10 per cent of the children and youth aged zero to 17 in Alberta are Indigenous, the report states.

The resulting trauma from this racism has resulted in many Indigenous people feeling disconnected from their family and community, as well as issues such as missing and murdered Indigenous women and girls, Adams said.

The hope of Saturday’s round dance is, in part, to send the message that, despite everything, Indigenous people are still here, he said.

“We’ve managed to continue walking,” he said. “We still have our ways.”

“We cannot capture how we’ve lived in the past… What we can do is rediscover our roots, those traditional values, and apply them to our contemporary lives, where we build strong communities, strong families, our ceremonies. Our culture will thrive in the world.”