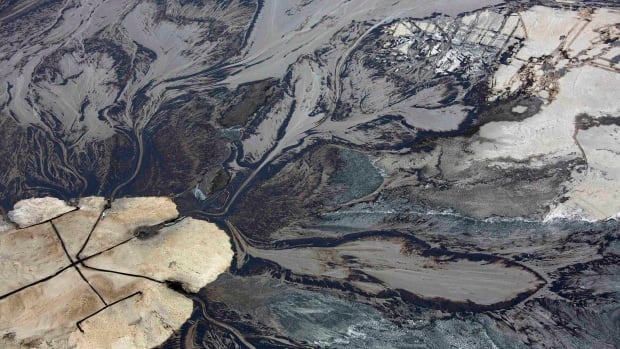 Northerners say the federal government’s plan to regulate the release of treated oil sands tailings water will be met with opposition by communities downstream.

As the N.W.T. Environment minister gears up for a diplomatic approach with Alberta and Canada, Dene leaders like Smith’s Landing First Nation Chief Gerry Cheezie are prepared to take legal action with Dene Nation, and to bring their opposition to tailings release all the way to Ottawa.

“I can’t believe the Government of Canada is willing to release this toxic sludge on our river and on our people,” he said. “We’re not going to sit back and allow this to happen.”

A working group for Crown-Indigenous Relation and Northern Affairs Canada has been developing standards for releasing treated tailings water since the beginning of 2021. The draft regulations under the Fisheries Act are slated for 2024, with final regulations by 2025.

The Ministry of Environment and Climate Change Canada did not provide CBC with an interview by press time.

The release of oil sands tailings to surface water is currently prohibited. Some experts argue that discharging treated water would be safer than allowing the tailings to accumulate, where they could accidentally be released in the event of a flood or other natural disaster.

The tailings ponds contain an estimated 1.4 trillion litres of tailings which have been deposited in the boreal forest since bitumen mining began in the 1960s.

That’s the equivalent of 560,000 Olympic swimming pools. If lined up, they would extend 28,000 kilometres, or roughly the distance from Yellowknife to the tip of Argentina and back.

Cheezie said next year, Dene Nation will meet and mount an education campaign about the impact tailings release would have on the North.

“We’re totally opposed to treatment and release of tailings ponds into the Athabasca because eventually it will flow into the Great Slave and eventually end up in the Mackenzie River and ultimately end up in the Arctic Ocean. Most of our communities are along this river system.”

Cheezie said the N.W.T. government should “take a stand” and not “hide behind the [transboundary water agreement with Alberta].”

He said that agreement has “no teeth” and is not protecting the North from pollutants.

N.W.T. Environment Minister Shane Thompson said the territory’s deputy minister is emailing back and forth with Alberta’s deputy minister, a line of communication that is open because of their bilateral water agreement.

“I have to believe in the system that we’re going to have communications with the federal minister, the Alberta minister to work it out,” he said.

Thompson said sharing scientific information with Indigenous governments will form part of the territory’s response. When the N.W.T. meets with its climate change council and Indigenous leadership, they will add water management to the agenda.

While he personally opposes the release of treated tailings, the minister said he’ll prioritize the science and put his faith in the transboundary water agreement.

Thompson said considering legal action at this point is “too negative” and would be a last resort.

The agreement requires Alberta to inform the N.W.T. about changes that will affect the territory’s waters, and includes an early warning system like it did during the 2020 Fort McMurray flood.

While hearing of the breach was “concerning,” he said, Alberta’s notification shows the benefits of the transboundary water agreement, which is “unheard of in other jurisdictions.”

N.W.T. Premier Caroline Cochrane is headed to Ottawa this week.

Cheezie said when Cochrane meets with the Prime Minister, “I would hope she would bring up this issue because it’s going to destroy our people and our river.”

A spokesperson for the premier wrote in an emailed statement that there is “no plan” to do so.

“We have heard the concerns of Indigenous governments, Indigenous organizations, and residents across the N.W.T., and we share these concerns” and the territorial government is waiting to receive more information to make an informed decision, the statement reads.

‘The toilet bowl of Fort Mac’

At the edge of oilsands development, Alice Rigney, a Dene elder in Fort Chipewyan has toured Suncor’s reclamation lakes, including a pond along the Athabasca River.

While the ponds may “look appealing” Rigney remains sceptical of those who say the tailings can be released safely because communities downstream already face health impacts.

“The feds and the province say that it’s OK, but we live downstream … all the people along the Mackenzie right to the Arctic Ocean. We’re the toilet bowl of Fort Mac and if they lived here, I’m sure they would see it differently,” she said.

“We have our experts — the land users, the people who are affected at this end and all the way up to the Mackenzie.”

The water levels have dropped, the whitefish are gone, the commercial fishery is closed and there are no muskrats or berries to be found, she said.

“Jackfish Lake used to be our pantry, we could fish and hunt, pick berries, my mom and dad used to move out there and there were thousands of fish for dry fish,” she said.

Drinking water from the Athabasca River and inland streams is no longer acceptable and some lakes are drained.

She said the work to regulate tailings release is “obviously made by people who can look at it from a distance in their Calgary office” and that no government should support industry’s request to release treated tailings.

“As Dene Indigenous people we are earth watchers. I wanna leave this world knowing I did what I could for my grandson, for those yet to come. To protect the land and only take what you need,” she said.