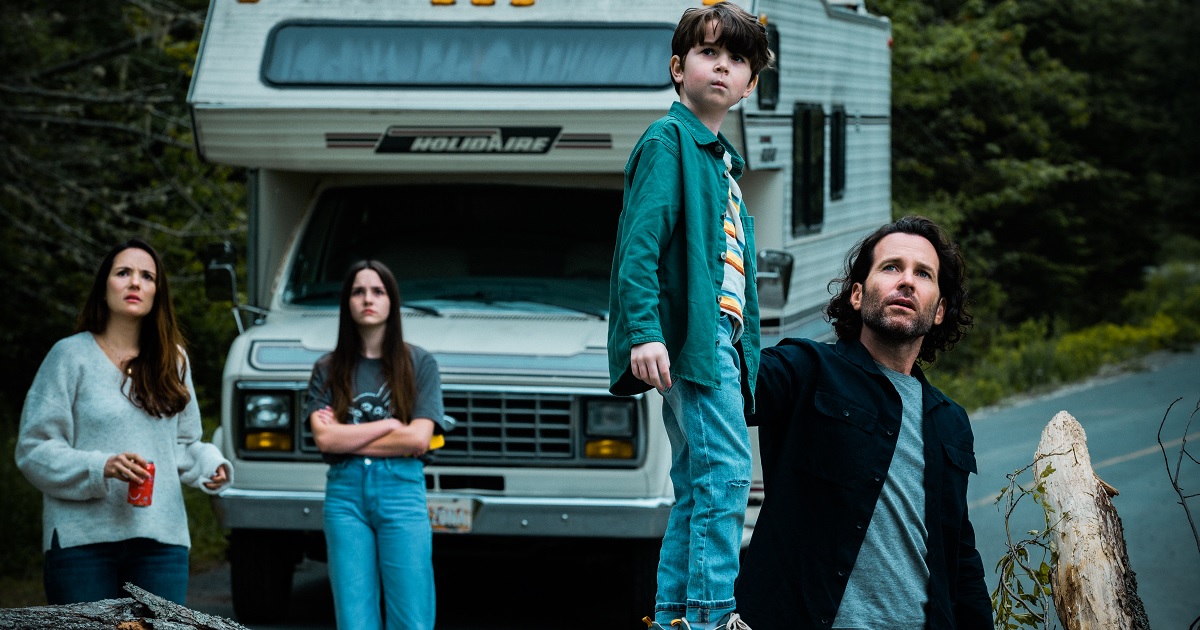 Last month, a 30 second teaser trailer revealed that the Epix TV series From will begin airing on February 20, 2022. Now a full trailer has arrived online to show us more from the show, and a batch of images have been released to give us a look at some of the characters. The trailer is embedded above, and the images can be seen below.

Written and created by John Griffin, From is described as a “contemporary sci-fi horror series”. The show will

unravel the mystery of a nightmarish town in middle America that traps all those who enter. As the unwilling residents fight to keep a sense of normalcy and search for a way out, they must also survive the threats of the surrounding forest – including the terrifying creatures that come out when the sun goes down.

The cast includes Catalina Sandino Moreno and Eion Bailey as married couple Jim and Tabitha Matthews, who are “struggling in the aftermath of a personal tragedy and suddenly find their family trapped in the town. Together they must find a way to keep their children safe, struggling to come to terms with this new reality even as they desperately search for a way back home”; Harold Perrineau as Boyd Stevens, “the sheriff whose Draconian rules have held the fragile town together, even as he searches for a way to escape this seemingly inescapable nightmare”; David Alpay as Jade, “a brash, entitled tech hot shot”; Elizabeth Saunders as Donna, “the earthy, strong leader of Colony House -the town’s separatist faction”; Corteon Moore as Ellis, “the estranged son of Sheriff Boyd and a resident of Colony House”; Hannah Cheramy as Jim and Tabitha’s adolescent daughter Julie”; Shaun Majumder as Father Khatri, “who cares for the spirits of the townsfolk”; Simon Webster as Jim and Tabitha’s son Ethan, who is gravely injured during the story; Ricky He as Sheriff Boyd’s deputy Kenny; Elizabeth Moy as Tain-Chen, Kenny’s mother and operator of the town diner and supply depot; Chloe Van Landschoot as town medic Kristi; and Pegah Ghafoori as Fatima, who considers Ellis to be the love of her life.

The first season of From will consist of 10 episodes. Outside the United States, the show will be distributed through the Netflix streaming service.