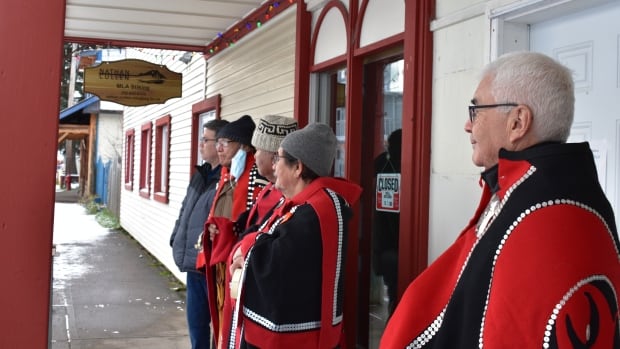 Gitxsan leaders say MLA Nathan Cullen is no longer welcome on their territory after he failed to meet them to discuss the deployment of RCMP officers at an encampment at a railway line in New Hazelton, B.C.

Members of the Git’luuhl’um’hexwit House traditional leadership are the latest to sign an eviction notice posted on the Stikine MLA’s office, which states that Cullen has failed to ensure the safety of Gitxsan and Wet’suwet’en peoples and failed to represent their causes and concerns in the legislature.

The Office of the Gitxsan Hereditary Chiefs posted the notice last Saturday on Cullen’s Hazelton, B.C., office, which is on the traditional territories of the Frog Clan of the Gitxsan Nation.

It followed the release on social media of a video showing an arrest near the encampment in the northern B.C. community, in which four officers are seen on top of a man who is shouting that he can’t breathe.

Cullen told CBC News that he missed a meeting with the chiefs last Friday because of a delayed flight and that he was planning to speak with them this week.

Hereditary Chief Luutkudziiwus (Gordon Sampson), told CBC News that the chiefs had requested an immediate meeting with Cullen after dozens of RCMP officers poured into New Hazelton — a community around 200 kilometres northeast of Prince Rupert, B.C. — to police an encampment set up Nov. 18 in solidarity with actions by Wet’suwet’en members and supporters to halt the construction of the Coastal GasLink pipeline.

Video shared on Facebook of an arrest at the encampment on Nov. 21 shows four officers on top of a man near the rail line. The man is heard shouting, “I can’t breathe!” while the person taking the video screams at the officers to let him go.

A second person who tries to intervene is seen being put in a headlock by another officer.

WARNING: The video of the arrest, below, might be distressing and triggering for some viewers

Officers arrest Denzel Sutherland-Wilson and an unnamed second person near the train tracks in New Hazelton as tensions flare over the Coastal GasLink pipeline project. 2:04

RCMP said 24-year old Gitxsan member Denzel Sutherland-Wilson was arrested for mischief at the site after he was seen placing obstacles on the railway tracks and refused to leave.

A second person was arrested for obstruction of justice, police said. Both were released shortly after being taken to a detachment.

CBC News has asked RCMP whether charges have been laid against the two people arrested, and has also asked for details on the deployment in New Hazelton — including how many officers were deployed — but has yet to receive a reply.

Kolin Sutherland-Wilson, Denzel’s brother and a member of the Git’luuhl’um’hexwit House of the Gitxsan Nation, said the police actions were the “final straw” for the hereditary leaders.

According to Gitxsan hereditary chiefs, Cullen refused to meet with them last Friday.

“He was very clear. He said … he would like to meet with us, but he does not want to be seen as taking sides,” Luutkudziiwus said.

Cullen refuted this when he spoke to CBC on Sunday. On Thursday, he told CBC by text message that he had met with hereditary leaders earlier this week and there was another meeting scheduled for Friday. He declined to comment further for this story.

Luutkudziiwus says there needs to be accountability for Cullen’s silence since more arrests were made on Wet’suwet’en territory over the actions against Coastal GasLink.

In the last month, at least 30 people have been arrested on Wet’suwet’en land for breaching an injunction granted to Coastal GasLink that guarantees the company access to the territory and use of the Morice River Forest Service Road.

Addressing a small gathering outside the MLA’s office on Saturday, Luutkudziiwus referenced the Dalgamuukw vs. British Columbia Supreme Court case of 1997 which affirmed that the rights and title of the Wet’suwet’en and Gitxsan were never extinguished.

But Cullen says the work to come to a final agreement regarding rights and title and jurisdiction following the Delgamuukw decision “just wasn’t done” by the government at the time.

He accused the government at the time of using a “backdoor route” to circumvent the need for consent from the hereditary chiefs by signing agreements with the Band councils, a system of governance that was implemented by the colonial government through the Indian Act of 1876.