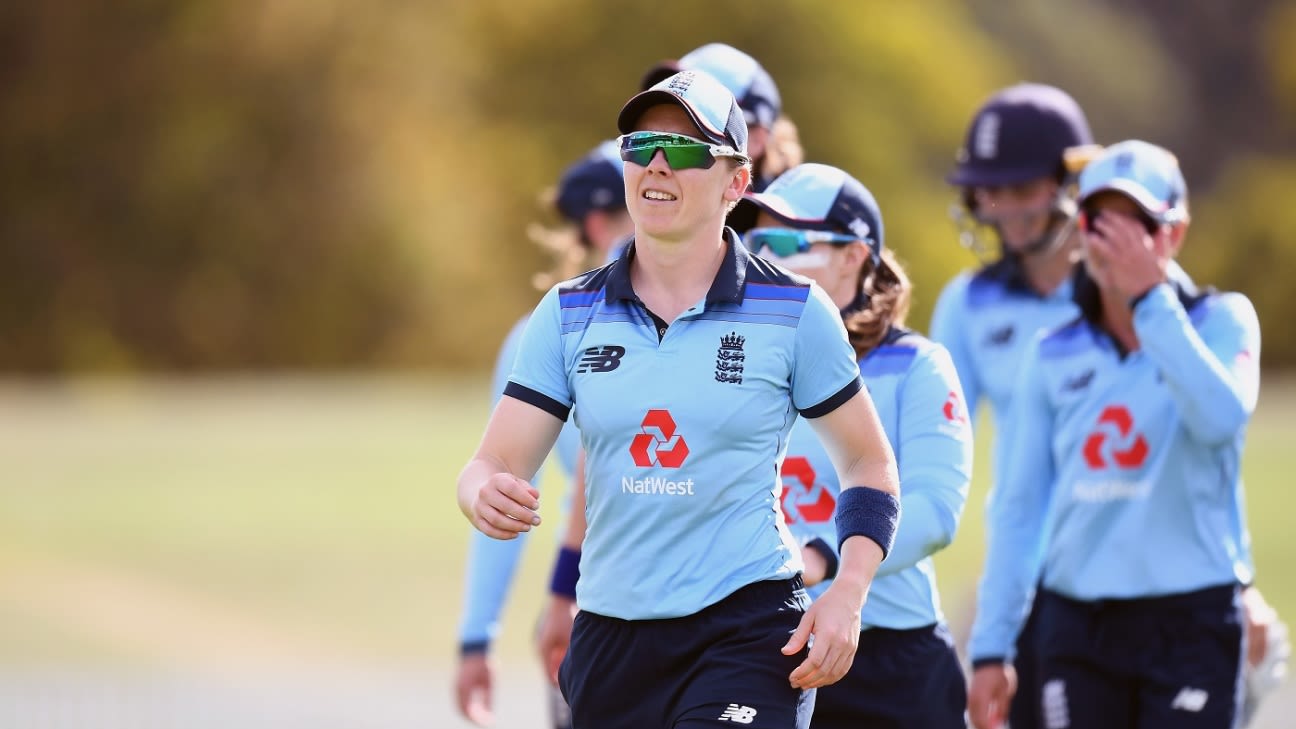 Heather Knight has vowed to “fight fire with fire” in Australia after England named a 17-strong squad for the Women’s Ashes.
For the first time, the touring women will take an England A squad to Australia, including teenage allrounder Alice Capsey, who enjoyed a breakout season in 2021.
The England squad – larger than usual to allow for possible Covid-related absences – contains no surprises with all of the players boasting international experience and including newcomers Charlie Dean and Maia Bouchier, who debuted against New Zealand in September. Tash Farrant, whose performances last summer earned her a place back on the list of centrally contracted England players after two years on the fringes, was also named in the senior squad.

Knight, the England captain, called for a “bold” approach from her charges against Australia, who retained the Ashes on English soil in 2019 by 12 points to four in the multi-format series after the Test was drawn and their hosts secured a solitary, consolation win in the final T20I.

“We’ve got to take the game to Australia,” Knight said. “Any team that’s been successful against them as has gone at them. Meet fire with fire, almost.

“The Aussies are at their best when they’re on top of you and trying to exploit weakness so we’ve got to make sure we’re trying to punch first and be aggressive towards them and try and win those key battles very early because when they get on top, they’re quite hard to flip around.

Emily Arlott, the Worcestershire seamer who was drafted into England’s squad – but didn’t play – ahead of their Test against India in June on the back of her quadruple-wicket maiden in a five-wicket haul for Central Sparks in the Rachael Heyhoe Flint Trophy, joins 17-year-old Capsey among the 12 players in the A squad. Also included were fast bowler Issy Wong and PCA Women’s Player of the Year Eve Jones, with Georgia Elwiss and Kirstie Gordon adding international experience.

While the A squad will primarily play series against Australia A, comprising three T20s and three 50-over matches from late January to mid-February, plus warm-up fixtures against England, there is scope for players to be promoted to the senior ranks. There is also the prospect of earning selection for England’s title defence at the World Cup, due to be played in New Zealand throughout March.

“If those A girls have really good series in those warm-up games against us and also impress in those Australia A games, they’ve got the chance to make it into the full squad. And obviously the World Cup squad hasn’t been picked as well yet so there’s opportunities there.”

Capsey enjoyed an excellent season with Oval Invincibles as they won the inaugural Women’s Hundred while still studying at secondary school, earning her the PCA Women’s Young Player of the Year award and her first professional contract with South East Stars.

“She’s definitely one for the future,” Knight said. “But I do think we need to be careful not to over-egg our players. She’s young, she’s obviously very talented and her time will come I’m sure, whether that’s at some point in the Ashes, whether we call her up for the squad or in the World Cup, or down the line in a few years, who knows? But yeah, she’s exciting to watch, as are a number of players in the A squad.

Australia’s dominance of the 2019 series preceded an overhaul of the women’s domestic structure in England, with 51 players now on professional regional contracts in addition to the 17 centrally contracted to the national set-up. While Knight said it was too early for those changes to have any measurable effect on this Ashes series, England’s desire to make amends for their showing two and a half years ago would be a major influence in their preparation.

“The way we performed in 2019 I think has created real motivation, certainly for me and for the rest of the girls, how we played and how we didn’t perform in that Ashes series,” Knight said. “We’ve improved, I think, as a team. We’ve got more leaders in the side since 2019. It would be probably one of the biggest achievements of my captaincy if we’re able to do that and get the Ashes back Down Under.”

The England players returned on Monday from a two-week warm-weather training in Oman, with the recently engaged spinner Sophie Ecclestone rested from that trip after a heavy workload throughout the English summer. She will meet up with the squad for a training camp at Loughborough before Christmas, with the squads due to fly out on January 7.

It is still unclear what quarantine restrictions they face upon arrival in Australia with the rules in flux amid the latest Omicron variant, but Knight backed her players to cope with whatever requirements were imposed, given their experience of living in sequestered bubbles at home over the past 12 months, even if that meant limiting contact with others after Christmas.

“We’ve been outstanding at avoiding it at the moment and living safe and doing what we have to do to try and avoid it, which means probably we’re going to have to hunker down a little bit before that flight, but that’s what we have to do and what we’ve done quite a lot in the last couple of years,” Knight said.

Valkerie Baynes is a general editor at ESPNcricinfo