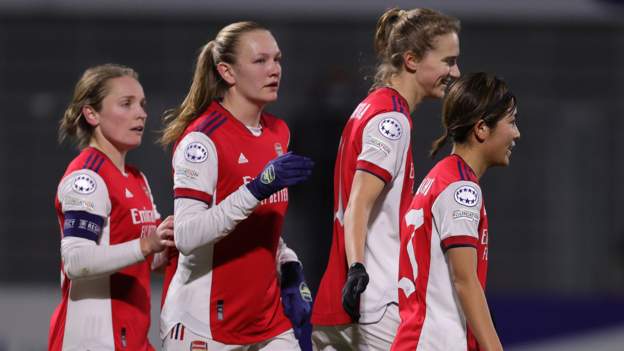 Arsenal boss Jonas Eidevall says it was “a terrible feeling” to see their Women’s Champions League quarter-final spot almost “slip through our hands” in a 4-1 defeat at Hoffenheim.

The hosts needed to win by five or more to go through at Arsenal’s expense.

Three quickfire goals gave them hope after being level 1-1 at the break.

“It’s the worst thing in the world to feel you are losing something that’s basically 100% secure before the game,” Eidevall said.

“In five minutes, we conceded three goals, and two of them is just us giving away the ball. We gave goals to them for free.

“It’s a terrible to have the feeling of ‘is this going to slip through our hands?’

“Then it’s a positive that we recomposed ourselves into the game, and then we go through.

“So it’s a very weird feeling.”

Despite the loss, the Gunners finished second behind defending champions Barcelona in Group C on nine points.

The German side, who lost the reverse fixture 4-0 in October, had their campaign ended despite finishing level on points with the Gunners and putting four goals past the Women’s Super League leaders themselves.

Jule Brand opened the scoring for the hosts before a Laura Wienroither own goal put the sides level at half-time.

Chantal Hagel netted twice and Gia Corley once as Hoffenheim rattled the visitors early in the second half.

Arsenal, without World Cup-winning United States forward Tobin Heath because of a muscle injury, did have captain Kim Little back in the side, and dominated early possession, with Vivianne Miedema heading off target after a cross from Frida Maanum.

Then England forward Beth Mead, the source of Arsenal’s most threatening attacks on the break, tested Martina Tufekovic in the Hoffenheim goal.

Against the run of early play, Hoffenheim took a 21st-minute lead as Brand ran on to a perfectly weighted pass from Corley. The 19-year-old picked her spot and finished past an advancing Williams at the near post.

Tufekovic produced an excellent save to deny Little as the Gunners looked for an immediate response.

Mead forced the Hoffenheim keeper into action again minutes later, only for defender Wienroither to turn the rebound into her own net.

The Gunners were punished early in the second half for repeatedly giving away possession as two quick-fire goals from Hagel put Hoffenheim 3-1 up. Her first was a precise finish inside the box before a brilliant effort from the edge of the area.

Corley added a fourth from Brand’s cross just two minutes later, but it was not enough to stop the Gunners advancing to the quarter-finals for a 14th time.

“It was a weird football game and we will learn from this game for our whole career,” Eidevall said.

“We had a five-minute period in the second half, which is unacceptable, being Arsenal. The mistakes we made, we can’t make those against any opponent.

“We keep making easy mistakes, we need to stop doing that. It’s impossible for us to win football games doing that.”

The defeat was Arsenal’s third in four games. They now host Brighton & Hove Albion on Sunday looking to extend their lead at the top of the Women’s Super League table.