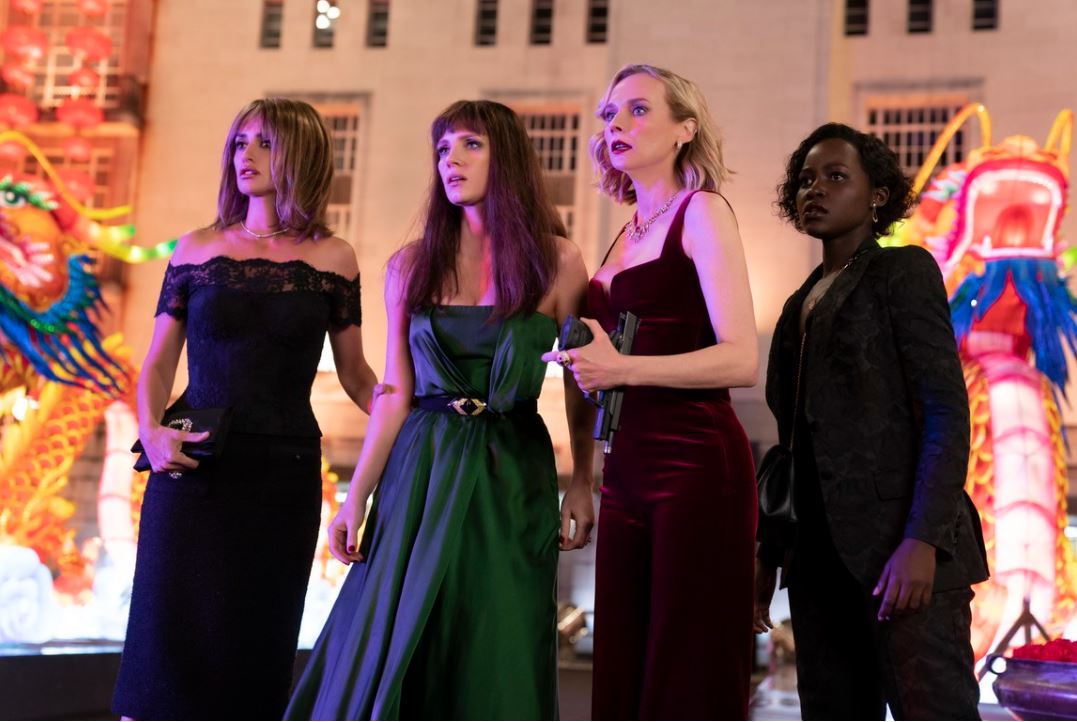 “The 355” is finally making its way to cinemas. Long delayed due to COVID-19, the star-studded spy movie kicks off 2022 right. Featuring Jessica Chastain, Diane Kruger, Lupita Nyong’o, Penélope Cruz, and Fan Bingbing, the action-packed pic opens on January 7. Releasing on the same day, thriller “See for Me” stars visually impaired nonbinary actor Skyler Davenport as a blind teenage girl who finds herself at the center of a home invasion, with her only recourse being an army veteran guiding her through an app.

An exploration of artificial intelligence, Ann Shin’s thought-provoking documentary “A.rtificial I.mmortality” (January 11) examines the possibility of a world where humans and AI merge. Other docs set for release this month include “Salt in My Soul” (January 21) and Emily Kunstler and Sarah Kunstler’s “Who We Are: A Chronicle of Racism in America” (January 14). The former chronicles author and cystic fibrosis advocate Mallory Smith’s extraordinary life, and the latter features ACLU Deputy Legal Director Jeffery Robinson’s groundbreaking talk on the history of U.S. anti-Black racism.

For the music fans, this month includes the stories of two legends in their fields. Inspired by the life of Celine Dion, Canada’s best-selling musical artist, Valérie Lemercier’s “Aline” (January 21) follows the singing sensation’s chart-topping ascent and her romance with her husband and manager. ”The Conductor” (January 28), a documentary from Bernadette Wegenstein, tells the story of Marin Alsop, a self-taught conductor who made history as first and only conductor to receive a MacArthur Award.

Here are the women-centric, women-directed, and women-written films debuting this January. All descriptions are from press materials unless otherwise noted.

The Beecroft family are ready to spend all of Chief Daddy’s inheritance, but not if the CEO of his company has anything to do with it.

A small research team went down below the surface to find out what secret the world’s deepest borehole was hiding. What they found turned out to be the greatest threat in history. And the future of humanity is in their hands.

Unlikely star and bantamweight teen tough cookie Linda Manz gives one of the greatest adolescent performances in cinema as Cebe, a punkette whose disastrous home life only gets more complicated when her ex-truck driver dad (Dennis Hopper) gets sprung out of the can and comes home, dragging bad habits and repressed memories back with him. A cinematic kick in the teeth set against the backdrop of ass-end-of-nowhere smalltown Pacific Northwest that’s something like Robert Bresson’s “Mouchette” (1967) under the influence of the Sex Pistols, and a magnificent showcase for “Days of Heaven” (1978) star Manz, who died in 2020, but can never be forgotten for the naked feral fury of her performance here. (Metrograph)

“The 355” – Written by Theresa Rebeck and Simon Kinberg (In Theaters)

When a top-secret weapon falls into mercenary hands, wild card CIA agent Mason “Mace” Brown (Jessica Chastain) will need to join forces with rival badass German agent Marie (Diane Kruger), former MI6 ally and cutting-edge computer specialist Khadijah (Lupita Nyong’o), and skilled Colombian psychologist Graciela (Penélope Cruz) on a lethal, breakneck mission to retrieve it, while also staying one-step ahead of a mysterious woman, Lin Mi Sheng (Fan Bingbing), who is tracking their every move. As the action rockets around the globe from the cafes of Paris to the markets of Morocco to the opulent auction houses of Shanghai, the quartet of women will forge a tenuous loyalty that could protect the world — or get them killed.

“See for Me” (In Theaters and Available on VOD) 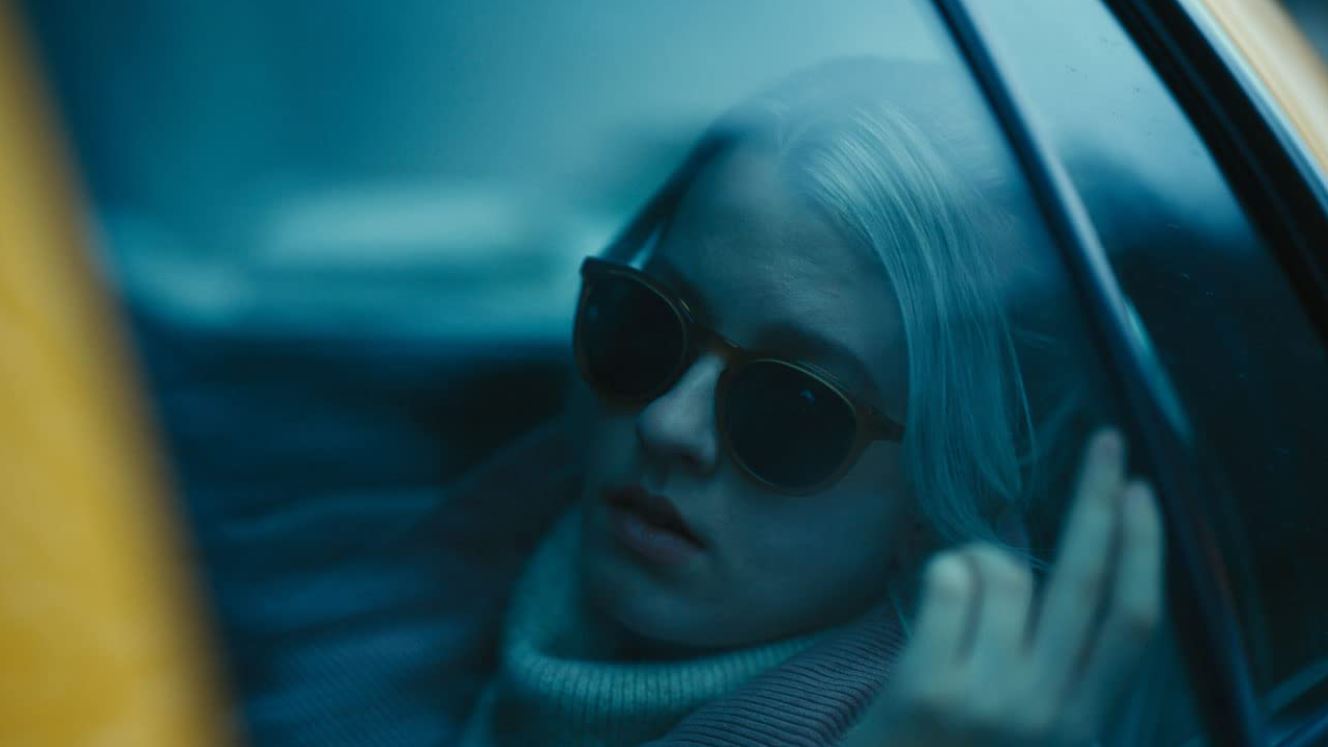 Sophie (Skyler Davenport), a young blind woman house-sitting at a secluded mansion, finds herself under invasion by thieves seeking a hidden safe. Her only means of defense: a new app called “See For Me.” It connects her to a volunteer across the country who helps her survive by seeing on her behalf. Sophie is connected to Kelly (Jessica Parker Kennedy), an army veteran who spends her days playing first-person shooter games. Sophie is forced to learn that if she’s going to survive the night, she’ll need all the help she can get. 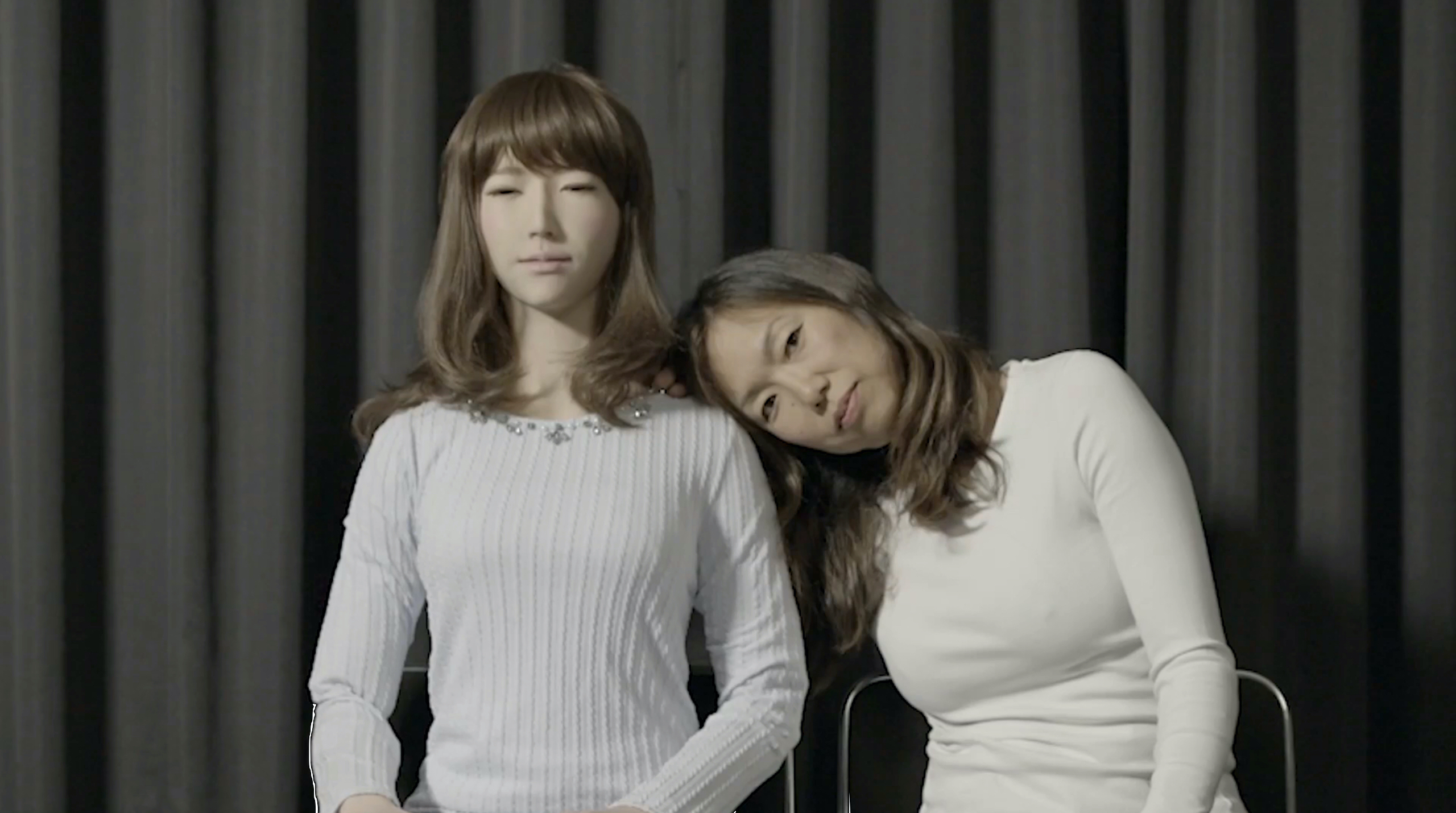 If you were able to create an immortal version of yourself, would you? Until recently, that question was the stuff of science fiction, but now artificial intelligence and robotics experts suggest it could be possible. This cinematic documentary explores the latest in cloning and avatar technology as we enter the age of the metaverse. What is the essence of the human mind, and can it be replicated? Or even more unsettling, could we soon meet cloned versions of ourselves which are better, smarter, and immortal?

“The Shepherdess and the Seven Songs” (In NY One Week Only)

“The Shepherdess and the Seven Songs” centers on a young bride, Laila (Navjot Randhawa), who marries into a tribe of nomadic Bakarwal herders. Already harassed by local police as a minority, Laila finds herself targeted for her remarkable beauty by local officials. Her implacable and ingenious manipulation of the men who want to possess her, and the patriarchy that wants to crush her, plays out in a series of seven chapters.

“No Straight Lines: The Rise of Queer Comics” (Documentary) – Directed by Vivian Kleiman (Available on VOD)

The road for queer comics from the margins of the underground comics scene to mainstream acceptance was fraught with challenges. “No Straight Lines” chronicles the journeys of five scrappy LGBTQ artists — Alison Bechdel, Howard Cruse, Mary Wings, Rupert Kinnard, and Jennifer Camper — from their early DIY work to the international stage, and offers a fascinating window into everything from the AIDS crisis to the search for love and a good haircut.

“Who We Are: A Chronicle of Racism in America” (Documentary) – Directed by Emily Kunstler and Sarah Kunstler (In Theaters)

Interweaving lecture, personal anecdotes, interviews, and shocking revelations, lawyer Jeffery Robinson draws a stark timeline of anti-Black racism in the United States, from slavery to the modern myth of a post-racial America.

“Belle” is a fantastical, heartfelt story of growing up in the age of social media. Suzu (Kylie McNeill) is a shy, everyday high school student living in a rural village. For years, she has only been a shadow of herself. But when she enters U, a massive virtual world, she escapes into her online personal as Belle, a gorgeous and globally-beloved singer. One day, her concert is interrupted by a monstrous creature chased by vigilantes. As their hunt escalates, Suzu embarks on an emotional and epic quest to uncover the identity of this mysterious “beast” and to discover her true self in a world where you can be anyone.

“Borrego” (In Theaters and Available on VOD)

Lucy Hale stars as Elly, a young botanist on a research mission gone awry. After witnessing a drug mule’s plane crash in the Borrego desert, she is kidnapped and forced on a dangerous journey to a remote drop off point. With limited essentials and alone in the desert with her captor, desperation for survival takes hold as Elly risks her life to escape from his clutches before the trip turns deadly.

“Italian Studies” (In Theaters and Available on VOD) 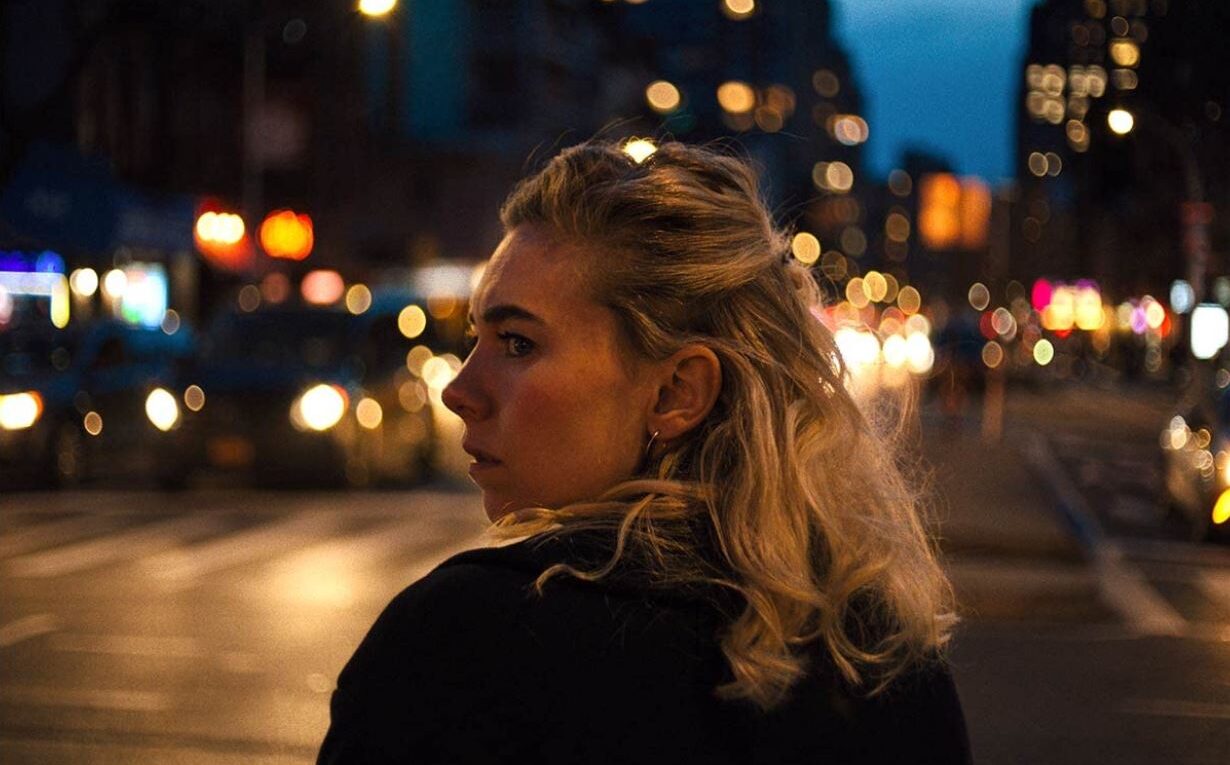 While visiting New York City from her native London, writer Alina Reynolds (Vanessa Kirby) inexplicably loses her memory and suddenly becomes unmoored and adrift on the streets of Manhattan with no sense of time or place — or even her own name. As Alina’s consciousness swings between imagined conversations, fragments of her own short stories, and the bustling city around her, she finds an anchor in charismatic teenager Simon (Simon Brickner). Drawn to the lost woman, Simon soon introduces Alina to his free-spirited group of friends, and together they make their way through a disorienting cityscape full of life, beauty, and music.

Southold, New York, 1843: Young Mary (Stefanie Scott), blood trickling from behind the blindfold tied around her eyes, is interrogated about the events surrounding her grandmother’s death. As the story jumps back in time, we witness Mary, raised in a repressively religious household, finding fleeting happiness in the arms of Eleanor (Isabelle Fuhrman), the home’s maid. Her family, who believe they are seeing, speaking, and acting on God’s behalf, view the girls’ relationship as an abomination, to be dealt with as severely as possible. The couple attempt to carry on in secret, but someone is always watching, or listening, and the wages of perceived sin threaten to become death, with the tension only heightened by the arrival of an enigmatic stranger (Rory Culkin) and the revelation of greater forces at work. 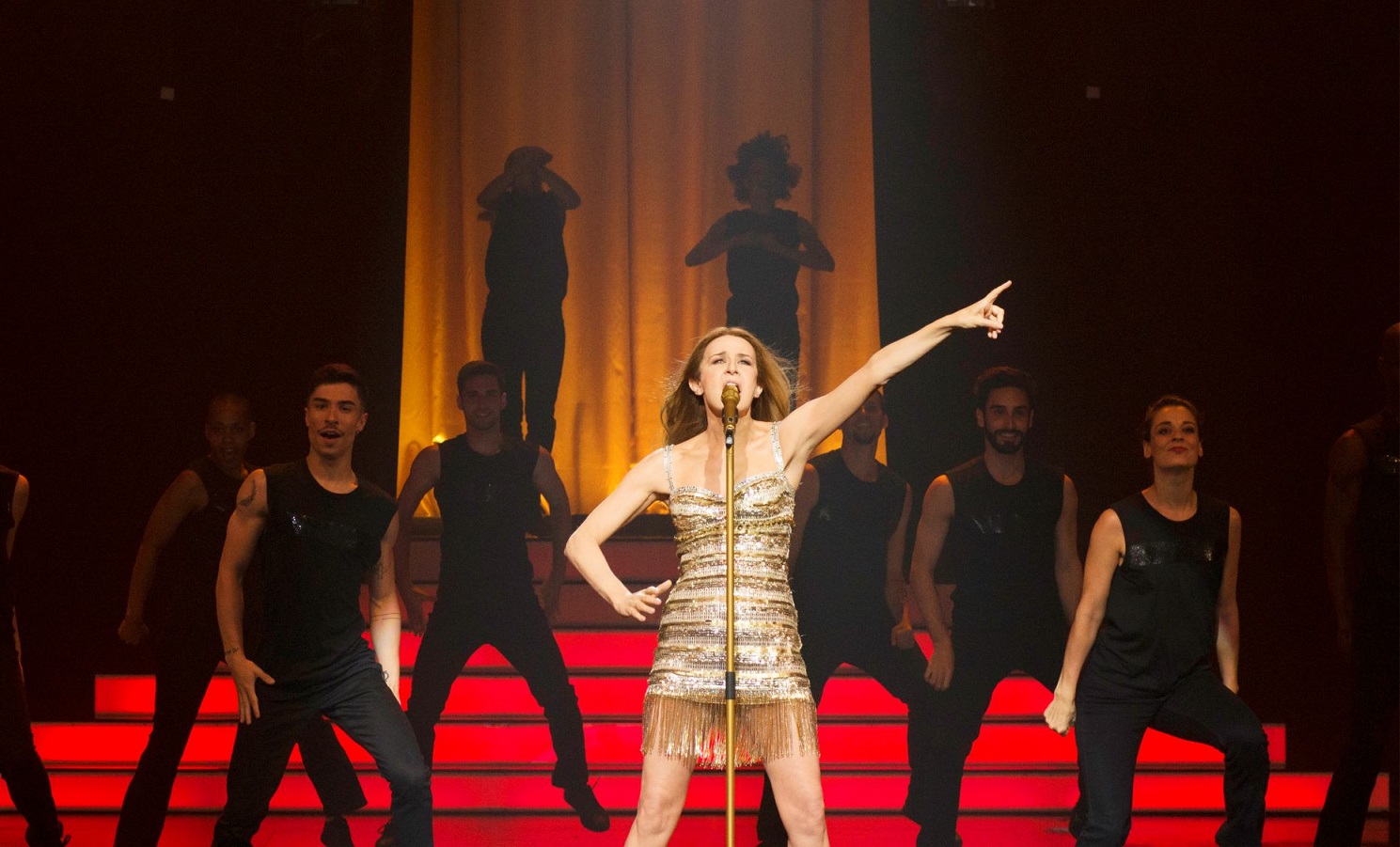 For Aline Dieu (Valérie Lemercier), nothing in the world matters more than music, family, and love. Her powerful and emotional voice captivates everyone who hears it, including successful manager Guy-Claude Kamar (Sylvain Marcel), who resolves to do everything in his power to make her a star. As Aline climbs from local phenomenon to bestselling recording artist to international superstar, she embarks on the two great romances of her life: one with the decades-older Guy-Claude and the other with her adoring audiences. Two-time César Award winner Valérie Lemercier plays Aline from ages five to 50 in a fictional musical dramedy freely inspired by the life of Celine Dion.

After an accidental shooting of an innocent Black man in Brooklyn, Chinese-American police officer Mike Tan (Kenny Leu) must wade through his profound guilt as he attempts to navigate the complicated worlds of media, justice, and racial politics.

“Salt in My Soul” (Documentary) (In Theaters; Available on VOD January 25) 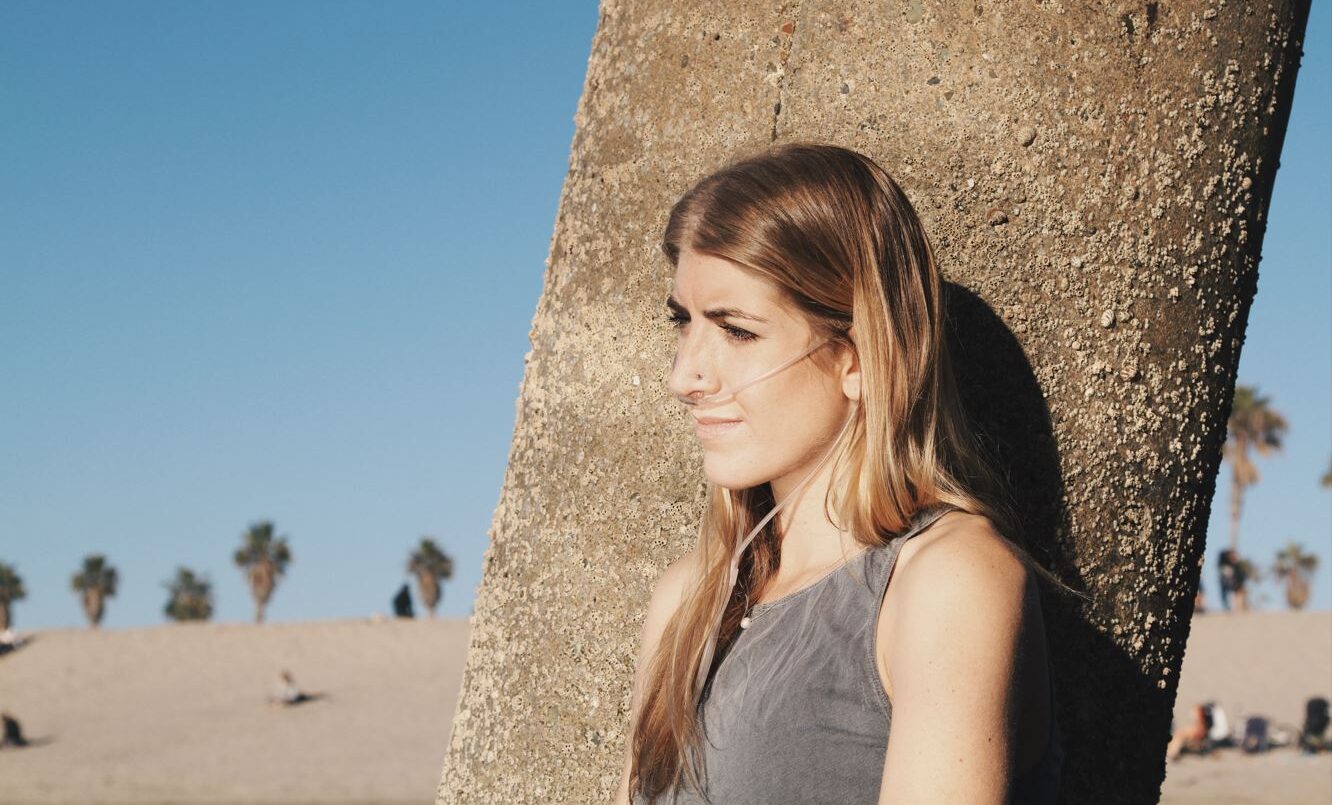 Mallory Smith was diagnosed with cystic fibrosis at the age of three. In her 25-year battle with the deadly disease, she carved out a life that most of us don’t come close to. Using Smith’s posthumously published 25,000-page secret diaries, hundreds of hours of newly discovered footage, and audio recordings, the film offers Mallory as the narrator of her own extraordinary chronicle.

Sold into prostitution as a child, Angel (Abigail Cowen) knows nothing but betrayal. Can her heart ever be mended?

A man ahead of his time, Cyrano de Bergerac (Peter Dinklage) dazzles whether with ferocious wordplay at a verbal joust or with brilliant swordplay in a duel. But, convinced that his appearance renders him unworthy of the love of a devoted friend, the luminous Roxanne (Haley Bennett), Cyrano has yet to declare his feelings for her — and Roxanne has fallen in love, at first sight, with Christian (Kelvin Harrison Jr.).

“The Midnight Swim” follows half-sisters Isa (Aleksa Palladino), June (Lindsay Burdge), and Annie (Jennifer Lafleur) in the wake of the disappearance of their mother, Dr. Amelia Brooks (Beth Grant), during a deep-water dive in Spirit Lake. The three women decide to travel home to settle her affairs, where they accidentally summon a local ghost and find themselves drawn deeper into the mysteries of the lake as their relationship begins to unravel.

“The Conductor” (Documentary) – Directed by Bernadette Wegenstein (In Theaters) 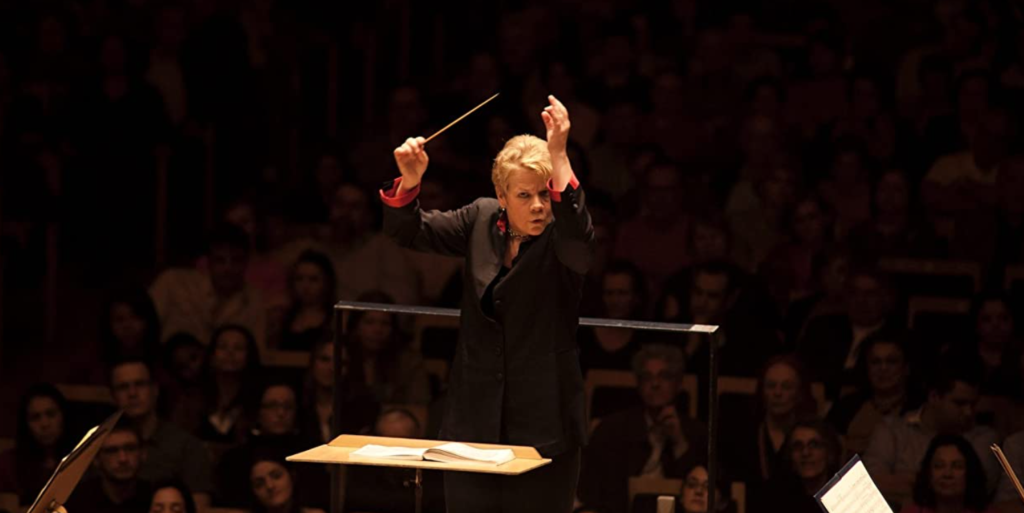 Marin Alsop is a woman of firsts. She was the first (and only) conductor to receive a MacArthur Award. Alsop became the first female to be appointed as music director of a major symphony, the first female music director of the São Paulo Symphony Orchestra, and the first woman to conduct the BBC’s “Last Night of the Proms.” In 2020, Alsop became the first woman ever appointed as Chief Conductor of the Vienna Radio Symphony Orchestra (RSO) and speculation in music circles suggests that she’s on track to become the first woman to conduct the prestigious Vienna New Year’s Concert. Set to a breathtaking soundtrack of her performances, “The Conductor” tells Alsop’s story through a combination of intimate interviews and shared professional and private moments, encounters with musicians and cognoscenti in the music world, unseen archival footage with her mentor Leonard Bernstein, and vérité scenes of Alsop conducting some of the world’s great orchestras and teaching the next wave of conductors who, like her, were being excluded from the classical music canon.