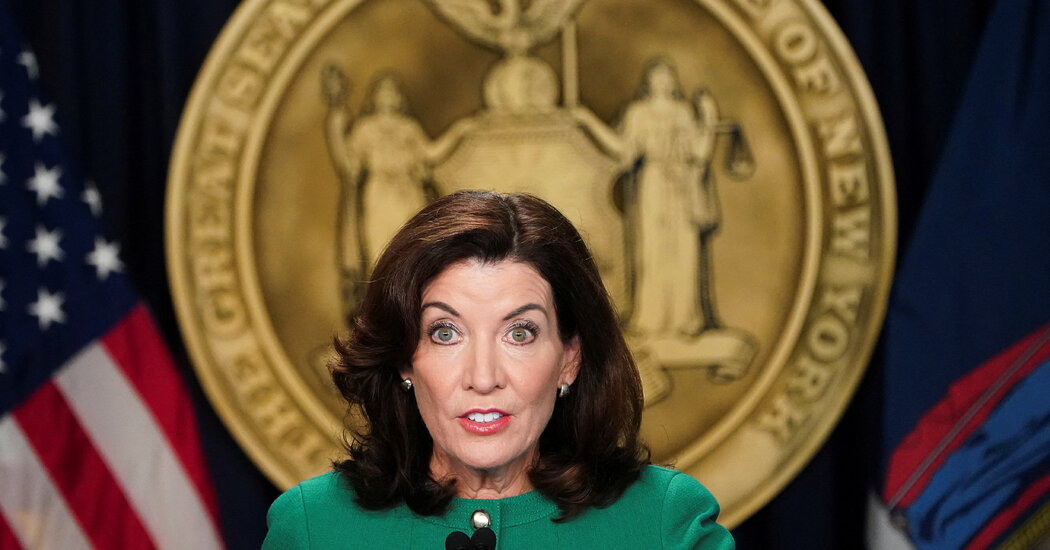 Gov. Kathy Hochul will propose a limit of two four-year terms on New York State governors in her first State of the State address on Wednesday — a move that could allow Ms. Hochul to distance herself from her scandal-marred predecessor, former Gov. Andrew M. Cuomo, who held outsize power for over a decade.

The proposal, a milestone that would require a constitutional amendment, would apply only to statewide elected officials — including the lieutenant governor, the attorney general and the comptroller, according to state officials.

It would need approval from the State Legislature as well as from voters and could significantly curb the power of the highest office in New York, where recent governors have served for as long as 14 years. New York is one of about a dozen states without term limits for statewide office.

Ms. Hochul’s move comes as she runs for a full term and could help her position herself as an advocate for government reform.

“I want people to believe in their government again,” Ms. Hochul said in a statement.

Her proposal would also bar statewide elected officials from receiving outside income, except if the income comes from teaching. Mr. Cuomo earned $5.1 million for a memoir about the pandemic, and a state ethics board has ordered him to forfeit the money, though that effort has stalled.

Past governors have supported term limits, if in name only. Former Gov. George E. Pataki, a Republican, famously pledged to serve no more than two terms, but ended up running for and winning a third term. Mr. Cuomo had said he supported term limits, but proposed they also be imposed on legislators, knowing that it was highly unlikely that incumbents in the Legislature would term-limit themselves.

“Term limits have resulted in a far more racially, culturally and sexually diverse New York City Council and contributed to a dynamism and urgency in city government that is sorely needed in Albany,” he said.

Ms. Hochul disagreed, saying in a statement, “The Legislature is most effective with institutional knowledge and should not be subject to term limits.”

Carl E. Heastie, the Democratic Assembly speaker, expressed reservations about term limits, saying that he believed voters should decide an elected official’s fate, but adding that he would speak to fellow lawmakers about the proposal.

After four months of focusing mostly on the pandemic, Ms. Hochul is expected to use her address on Wednesday, the most important speech of her political career, to delineate her agenda. At stake are the recovery of a state still contending with the pandemic’s economic fallout and Ms. Hochul’s own political fortunes ahead of a June primary.

Ms. Hochul, a Democrat from Buffalo who ascended from lieutenant governor after Mr. Cuomo’s sudden resignation in August, has yet to take firm positions on a number of ideological wedge issues in the state, including potential revisions to bail laws.

The annual speech will mark the first time that Ms. Hochul, who did not play a prominent role as Mr. Cuomo’s lieutenant governor, will define her policy priorities before a State Legislature still deciphering her ideologically on a range of issues.

Shortly after, Ms. Hochul will have to assemble a $200 billion state budget while navigating a contested primary that might push her to the left on some issues — a move that could make her vulnerable to attacks from Republicans during the general election.

Indeed, it remains to be seen whether Ms. Hochul will wield her influence as governor to steer the political discourse more toward the center in the State Capitol, where Democrats have enacted a potpourri of left-leaning policies since regaining control of the Legislature three years ago.

“So much of her attention has properly been focused on Covid management that where she stands on some broad, more ideological questions is still unknown,” said Senator Michael Gianaris, a Democrat from Queens and deputy majority leader in the upper chamber.

One of the most explosive issues likely to come before the Legislature is the bail reform law enacted in 2019, which abolished cash bail except for certain felonies. Democrats have come under increased pressure to roll back parts of the law after Republicans used it as a cudgel to unseat some Democrats in November, arguing that the law had led to the release of dangerous criminals.

Ms. Hochul has sidestepped questions about her stance, saying that she would discuss the issue privately with legislative leaders. If she pursues changes, she’ll have an ally who could provide political cover in Eric Adams, the new mayor of New York City, a moderate Democrat and former police captain who supports amending the law.

Some lawmakers said there was little appetite among most Democratic lawmakers to alter the law, even as some moderate legislators, especially those in competitive districts on Long Island, have clamored for revisions.

State Senator Todd Kaminsky, a Democrat who lost his bid for district attorney of Nassau County last month after his Republican opponent attacked him relentlessly on the issue, said he supported giving judges more discretion in setting bail, though he acknowledged, “There’s no doubt it’s an uphill challenge to change the law.”

Time and again, Ms. Hochul has deftly declined to stake out positions on a number of politically charged issues that are considered priorities of the party’s left wing and could give Republicans ammunition against her.

She has avoided weighing in on housing legislation known as “good cause eviction” that has gained significant traction and would give tenants a right to renew their leases in most cases and significantly limit how much landlords can increase rents each year.

The bill, often used by the left wing as a barometer to measure progressive credentials, is opposed by the real estate industry and backed by Jumaane Williams, the New York City public advocate, who is running against Ms. Hochul in the gubernatorial primary.

Ms. Hochul said in November that she was “not going to be telegraphing my positions early on because otherwise it’s not a collaborative process.”

She offered a similar noncommittal response when asked last month about the New York Health Act, which would create universal single-payer health coverage in the state, drastically altering the health care industry. The bill faces serious hurdles, including opposition from public sector unions that Ms. Hochul is trying to court, but it has enough Democratic co-sponsors to pass both houses.

Ms. Hochul, a former congresswoman who represented a conservative-leaning district, was expected to come under significant pressure to back left-wing initiatives to remain competitive in the Democratic primary, which tends to attract the party’s most liberal voters.

But that pressure eased after her most serious challenger, Letitia James, the state attorney general, withdrew from the race.

“I don’t think Kathy will think she has to move so far to her left that it puts her at any specific risks in the general election, where she has to move toward the center,” said Ms. Krueger, who endorsed Ms. Hochul.

Yet Ms. Hochul has also sought common ground with the party’s left flank on some issues. She joined Senator Jabari Brisport, a democratic socialist from Brooklyn, on a statewide listening tour he held last month to build support for legislation to implement universal child care in New York.

Ms. Hochul’s stance on Mr. Brisport’s proposal, which he said would provide free child care for children under 3 at a cost of about $5 billion a year, remains unclear, but she has said that child care would be “a major priority.”

“I think it says a lot that she’s willing to build really good bridges between the executive branch and the legislative branch and work in concert together,” Mr. Brisport said.

On some policy matters, Ms. Hochul has been unequivocal.

She has ruled out raising taxes on the wealthy, saying she did not want to drive away high-income individuals, whose personal income tax contributions fund a significant portion of the state’s budget.

New York City’s top earners now pay the highest combined local tax rate in the nation after the Legislature overcame longtime opposition from Mr. Cuomo in April to raise taxes on the rich.

Her opposition to higher taxes comes as state coffers are flush with cash after a windfall of federal funding and higher than projected tax revenues that helped close a once-daunting $15 billion budget gap precipitated by the pandemic. Now, state officials are anticipating balanced budgets through fiscal year 2025, placing additional pressure on Ms. Hochul from special interest groups with suggestions of how to spend the extra money.

So far, Ms. Hochul has quelled questions about her stances on certain issues partially by deepening a reservoir of good will that she has with lawmakers. They applaud her more collaborative style of governing compared with Mr. Cuomo.

She has already hinted at other priorities she will pursue, such as investments in green energy projects and a $4 billion environmental bond act.

Her decision to deliver her speech in the Assembly chamber in the State Capitol will mark the return of a longtime tradition in Albany; Mr. Cuomo had moved his annual addresses to a larger convention center, a move that was seen by some lawmakers as a slight.