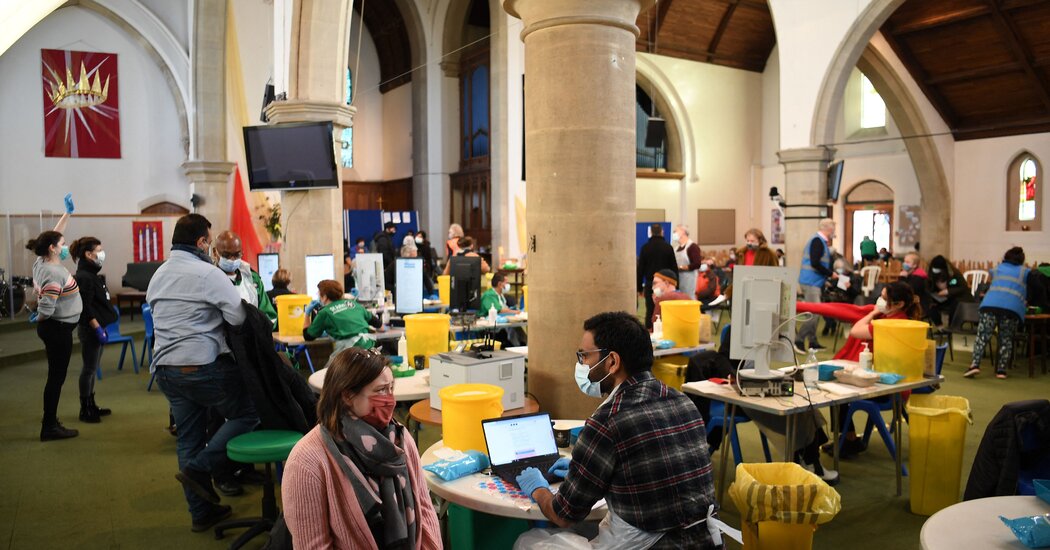 About 15 people who attended an anime convention in New York last month with a Minnesota man who later was found to have the Omicron variant have also tested positive for the coronavirus, the man has told health officials in his state. It is uncertain whether any of those cases involved the Omicron variant.

The man said that his friends — a group of about 30 people — had come from all over the country for the event, which ran Nov. 19-21. About half of them also later tested positive for the virus, he told the officials.

The man, officials said, was fully vaccinated and had gotten a booster just weeks before the convention. He has recovered from mild symptoms that began shortly after the convention ended, and has provided names and contact information of several in his group to health officials. Since the friends live in other states, their names were forwarded to those states’ health departments. Details of their cases are not known.

The Minnesota man’s case was among the first reports of Omicron in the United States, and it presented a worrisome possibility for health officials: Might the anime convention, which drew tens of thousands of people to the Jacob K. Javits Convention Center for three days, have been a vector for spreading the new variant, which scientists fear may be able to spread more quickly than any other variant?

After learning that the man had attended a large convention in New York, Kathy Como-Sabetti, manager of the Covid epidemiology section for the Minnesota Department of Public Health, said: “I kind of went, ‘Wow, well, this changes our story.’ This changes the picture of what we’re dealing with.”

At the Anime NYC conference, focused around a popular animation style that originated in Japan, attendees were fairly compliant about wearing masks, the man told officials. But some rooms were very crowded, at capacity, with crowds standing shoulder to shoulder, he said.

Convention attendees were required to provide proof that they had received at least one vaccine shot and they had to wear masks, according to the convention website. The rules allowed entry “immediately after” a first dose. People are seen as having full vaccination protection two weeks after a second dose of a two-dose vaccine.

“Time will tell how large it becomes,” Ms. Como-Sabetti said. “It’s hard to say that it is a super spreader. Certainly we’re concerned about that.”

Officials cautioned that much remains unknown: The man and his friends could have been infected in other venues — at restaurants, hotels or other locations during their trips, or at another time.

Still, the prospect of a cluster of cases raised new questions about the nation’s virus detection capabilities and the limits of its contact-tracing efforts, which have been disparate and limited since the start of the pandemic.

Michael Osterholm, the director of the Center for Infectious Disease Research and Policy at the University of Minnesota, said that he was concerned about the contact-tracing ability of health departments across the country, given their strained resources and the public’s general lack of cooperation with investigators. Also worrisome, he said, is the small number of cases that are being tested for the Omicron variant.

“Very quickly we’re going to see a number of Omicron cases around the country in many locations, just as we’ve seen in Minnesota,” he said.

After Minnesota officials learned that the convention attendee had the Omicron variant, they informed the New York City Health Department. City health officials said that they had begun sending text messages and emails to tens of thousands of the anime convention’s attendees, urging them to get tested.

Dr. Ted Long, who oversees the city’s contact tracing program, said that he was aware of five positive cases so far among New York City residents who attended the anime convention. But he said it was not yet known if those people had been infected by Omicron or Delta, nor was the convention known to be the site where they had gotten sick.

“We haven’t found evidence of widespread transmission at the convention,” Adam Shrier, a spokesman for New York City’s contact tracing program, Test and Trace Corps, wrote in an email.

Infectious disease specialists said that the first Omicron case to be linked to the anime convention was likely identified in Minnesota because that state’s health department has a robust genomic sequencing system, and not necessarily because the patient was the original index case.

Organizers of the convention stressed that it was uncertain where the man had contracted the virus.

“He was just one person who was at our event,” said Kelly Comboni, president of LeftField Media, which organized the convention. “There have been no other mass cases reported from our event, and we are now way past two weeks” since the convention’s end.