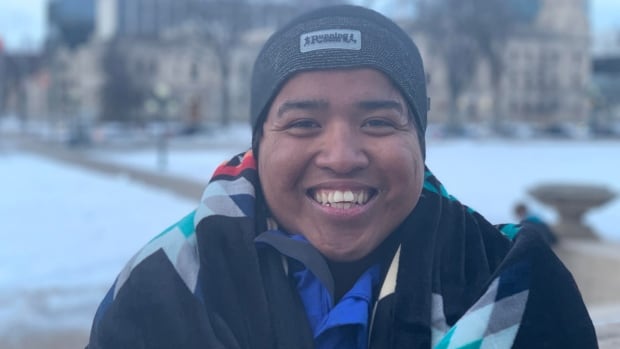 A 23-year-old man ran hundreds of kilometres in the bitter cold to raise money for families in his northern Manitoba community impacted by a fatal crash in the fall.

Manny Green organized a fundraiser after three adults were killed and six other people — including three young children — were seriously injured in a head-on crash near Berens River First Nation on Oct. 21, RCMP said in a news release at the time.

“I was thinking about the kids. There was so much kids left behind and it was just a very tragic moment in our community and I needed to do something for these families that lost loved ones,” he said on his 11th day of the run.

Green initially attempted the run in November, but injured himself and tried again on Dec. 2, departing from the First Nation on the eastern shore of Lake Winnipeg, about 275 kilometres north of Winnipeg.

It was a very difficult trek, he said, but what kept him going was a banner hanging over the truck that travelled behind him bearing the pictures of the people involved in the crash.

His fundraiser made about $15,000 for the families impacted.

The runner said that some members of his First Nation struggle with mental health problems and don’t have adequate resources to cope in healthy ways.

For Green, exercising is one way he can improve his own mental health in the absence of adequate therapy resources.

“I work out every day and I try to prove to myself that I’m better. Not better than anyone, but better than myself last year,” he said.

Manny’s father Gerald Green met up with his son near the end of the run, when he was completely exhausted, sore and had blisters all over his feet.