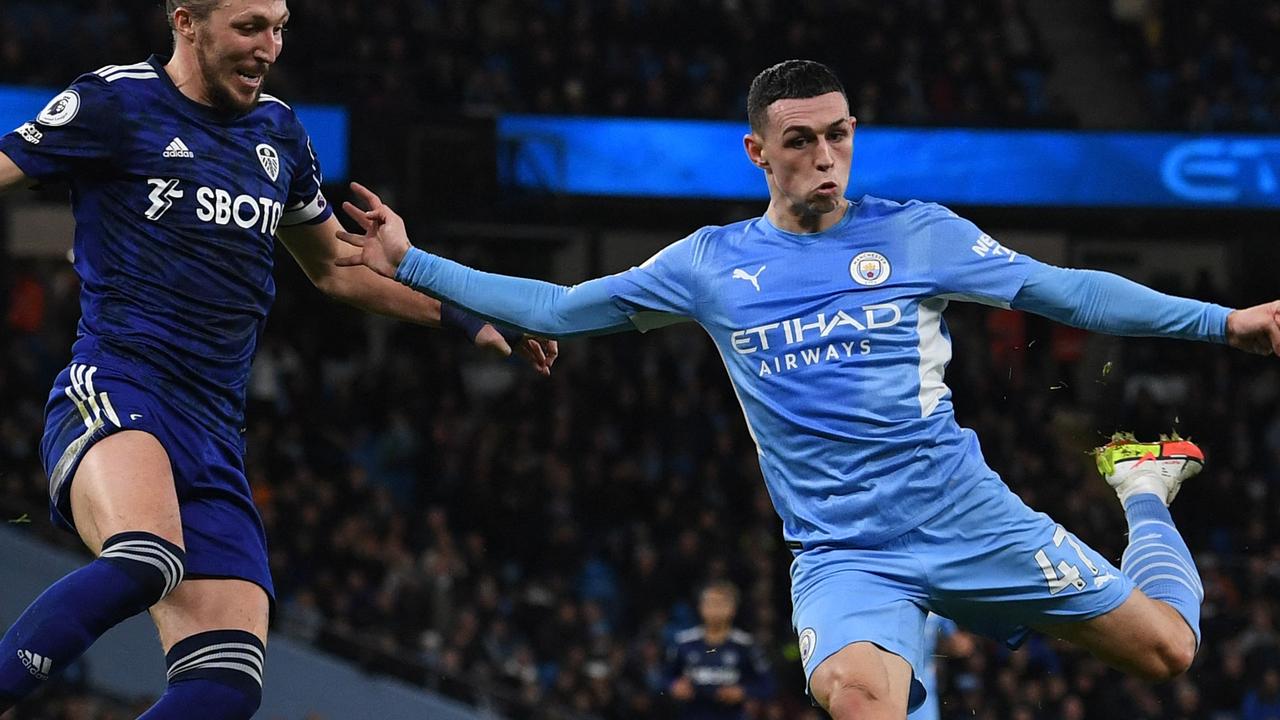 Manchester City powered four points clear at the top of the Premier League as Kevin De Bruyne inspired a 7-0 rout of Leeds just hours after clubs were given strict new measures to curb the threat of the coronavirus.

De Bruyne delivered an imperious display including two goals on his first league start since November 6 after the Belgian star recovered from a bout of Covid-19.

The champions’ biggest win this season equalled Liverpool’s 1982 top-flight record of 33 victories in a calendar year.

City took the lead in the eighth minute when Rodri’s effort was saved by Illan Meslier and the ball rebounded to Foden, whose shot was deflected in via Stuart Dallas’s miscued attempt to clear off the line.

It was City’s 500th Premier League goal in 207 matches under Guardiola, setting a new record that surpassed the previous fastest mark by Jurgen Klopp’s Liverpool.

In the 13th minute, the 26-year-old ended his drought as he scored for the first time since a Champions League win over Leipzig in September.

Rising to power a header past Meslier from Mahrez’s cross, Grealish celebrated his first Premier League goal since August.

De Bruyne marked his return with his first goal since October, running onto Rodri’s defence-splitting pass to drill a low shot past Meslier at the near post in the 32nd minute.

Mahrez added City’s fourth in the 49th minute when his strike from the edge of the area deflected in off Junior Firpo.

De Bruyne made it five in the 62nd minute with a thunderous 20-yard drive into the roof of the net.

Whether City’s determined title defence survives without a brush with Covid remains to be seen as the new Omicron strain wrecks havoc.

The Premier League announced on Monday there had been 42 positive Covid cases among top-flight players and staff last week — the most recorded in any seven-day period since testing began during the 2019-20 season.

Manchester United’s match at Brentford on Tuesday and Tottenham’s trip to Brighton last Sunday were both postponed due to virus outbreaks.

United and Tottenham had several unnamed players test positive, while Brighton, Leicester, Norwich and Aston Villa were also hit by the virus over the last week.

United shut down first-team operations at their Carrington training ground to minimise the risk of infection.

Now all top-flight players and staff will have to take a lateral flow test every time they enter their club’s training ground as part of the protocols.

Twice-weekly PCR testing will also be introduced after a meeting of the 20 clubs on Tuesday.

The increased testing sits alongside the other recently introduced emergency measures, including face coverings, limiting time in the treatment room and observing social distancing.

Norwich manager Dean Smith revealed his club had asked the Premier League for guidance over his bottom of the table team’s Covid issues prior to Tuesday’s 2-0 defeat against Aston Villa.

“It’s been a tough few days. We’ve had a few Covid-related drop outs,” Smith said before kick-off at Carrow Road.

Villa were also hit by Covid but they kept their focus to make it four wins from six games under new boss Steven Gerrard.

Smith had hoped for revenge on Villa just 38 days after his sacking. But Jacob Ramsey ran from the halfway line to fire home in the 35th minute and Ollie Watkins’ tap-in wrapped up the points in the 87th minute.