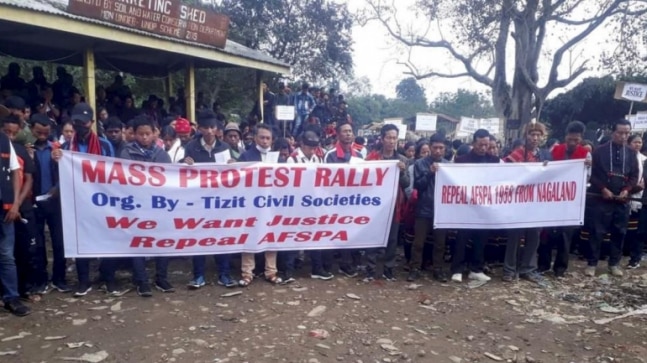 Family members of Oting firing victims have decided not to receive financial support from the Nagaland government until those behind the deaths are brought to justice and AFSPA is repealed from the entire North East.

Family members of the civilians who were shot down by the Armed Forces in Nagaland’s Oting village have decided not to receive financial aid from the state government until those behind the deaths are brought to justice.

In a letter, the Oting Village Council said that the ex-gratia amount will not be accepted unless the victims are delivered justice and the Armed Forces Special Powers Act (AFSPA) is repealed from the entire North East.

The village council said minister Paiwang Konyak and deputy commissioner of Mon brought an amount of Rs 18,30,000 before them on December 5. When they got to know it was an installment of the ex-gratia from the state government for the victims’ families and injured persons, they refused to take it.

Explained | Nagaland shooting: Latest violence and its links with demand for Nagalim

“The Village Council Oting and victim family will not receive until and unless the culprit of 21 Para Commandos of the Indian Arm Force are brought to justice before the Civil code of law and Armed Forces Special Powers Act (AFSPA) repealed from the entire North Eastern region of India,” the letter read. The Nagaland government has announced an ex-gratia of Rs 5 lakh each to the families of the victims killed in firing by security forces. Rs 1 lakh would be given to the injured by the state government. Besides this, the Centre has also announced Rs 11 lakh ex-gratia and a government job for the families of deceased individuals.

On December 4, six coal mine workers were killed at Oting village in Mon district in a botched-up ambush by security forces. This led to clashes later, in which seven civilians lost their lives.

On Sunday afternoon, a mob vandalised and set on fire parts of an Assam Rifles camp in Mon town during which another civilian was killed.