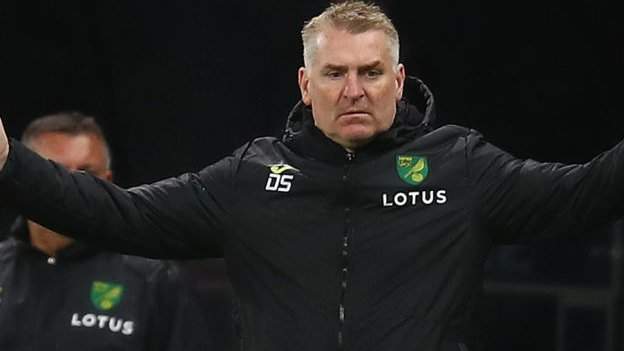 Norwich manager Dean Smith “doesn’t know” if he will have enough players to face West Ham this weekend.

The Premier League has introduced new guidelines in an effort to stem rising Covid cases.

But Smith is unaware of the number of positive cases required for a game to be postponed.

“I’m not saying all our players are symptomatic and have Covid, because some are injured.”

Brentford manager Thomas Frank and Arsenal boss Mikel Arteta have already made calls for clarity regarding the number of positive cases that would lead to a game being called off.

“I would normally name the team the day before and could have eight players [affected] who would be in the first team,” added Smith. “Then the fact that Ozan Kabak goes down and Sam Byram makes his first appearance in two years – we are down to the bare bones.

“I will find out over the next 48 hours from the medical staff about our cases. I have seen new Premier league protocols where we are tested every day. The heat is on, not just across football but across the country.”

‘I don’t know how much more we can do’

West Ham boss David Moyes says the Hammers are currently “clear” of coronavirus cases but is concerned the fixture schedule could be having an adverse effect on transmission rates.

“I think the amount of games in close proximity is not helping,” said Moyes. “It doesn’t help players or staff, whether it be travel or other things. The players are getting very little time to recover and when you are run down, you are more likely to get the virus.

“Also we are using quite a few young players. When football was shut down last season it was a lot to do with the under-23 players. It’s really important that young players are not bringing it into the camp.

“I don’t know how much more we can do. We are really trying to keep it out.”