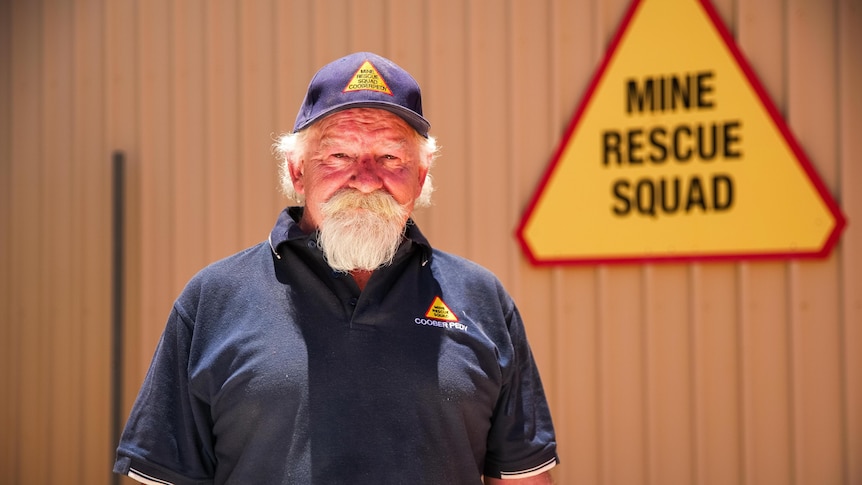 In Australia’s opal capital, Andy Shiels goes underground searching for something much more precious than a rainbow-coloured fortune.

For 40 years, he has gone looking for life.

“Back in the 70s and 80s, it was very wild around here and nobody was very safety conscious back then, so we were losing quite a few miners,” Mr Shiels recalled.

“We were probably doing a serious mine rescue job every month or so.”

Mr Shiels’s main focus, in Coober Pedy in South Australia’s far north, has been rescuing those who have struck trouble.

On innumerable occasions, Mr Shiels has ventured into the town’s subterranean surrounds.

He admits there have been grim emergencies he would rather forget.

But he knows that, without the town’s mine rescue team, the prospects would be much worse for those trying to strike it rich.

“[For] one of the first rescues, one of the miners went and got the local priest to go down the hole, and then we were sending nurses down,” he said.

Saving a life the ‘best thing you can do’

Coober Pedy once relied on a relatively rag-tag crew of rescuers to keep safe those searching for its iridescent gemstones.

But today, that team has morphed into a slick State Emergency Service (SES) squad.

The unit is multipurpose, and often responds to road crashes in SA’s remote far north, including along the Stuart Highway that connects Adelaide to the Northern Territory.

But it is the only SES team in the state qualified to rescue people from opal mines.

Unit manager Anthony Daelman-Whitaker said, despite improvements to mine technology and safety, the unit’s work was still very important.

“Mining can be dangerous and using heavy machinery — especially using machinery underground — comes with all sorts of wonderful risks,” he said.

Those risks, he said, include those posed by hydraulics and other machinery.

“If they’re using generators, they’re putting fumes down into a mineshaft and they could suffocate themselves,” he said.

“It also presents a lot of risk for us when we need to go and rescue someone from underground.”

The squad’s importance was emphasised in the lead-up to Christmas this year, when the team rescued a miner who had become trapped under a large piece of rock debris.

Outback carpenter Yael Cheme Tumapang began working with the team before she was even old enough to officially join.

“You get to be in this little family and you get to know everybody and get close, and it’s cool,” Ms Cheme Tumapang said.

She said there was also a rush involved with a rescue.

“It’s not often that you get down a shaft and it’s just so exciting,” she said.

“The best thing you can do in life is save somebody else’s life,” he said.

“Your brain gives you all these nice little endorphins, it makes it all worthwhile.”