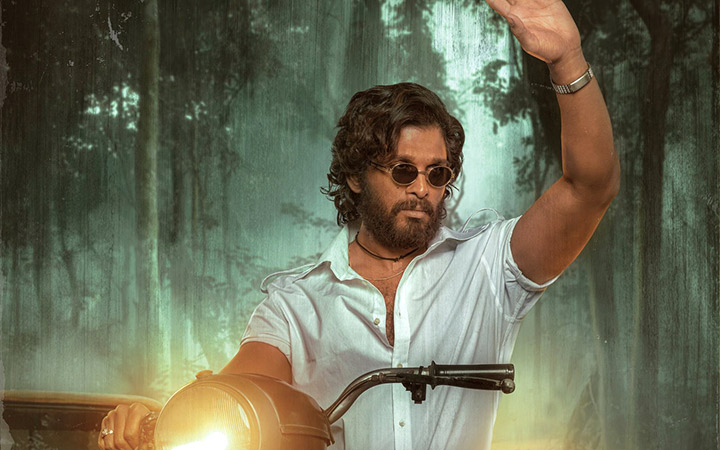 PUSHPA: THE RISE – PART 01 [Hindi] is the story of a badass working in the red sandalwood smuggling industry. In the forest of Seshachalam, the smuggling of red sandalwood goes unabated. The red sandalwood is cut from here and taken illegally to Chennai from where it is shipped to China and even further to Japan. Pushpa Raj (Allu Arjun) is an illegitimate child of Muletti Venkatraman, a rich landlord in a village. The latter never accepted Pushpa and his mother, Parvati Devi. After his death, his biological son threw the mother-son duo out of their house given by Muletti and left them to fend for themselves. Pushpa grows up doing odd jobs. He has a lot of attitude and hence, gets kicked out of a job. While waiting for his next daily wage job, he finds out that the red sandalwood business pays a lot although the risk is also way higher. He joins the industry as a woodcutter. One day, the police raids while they were busy cutting the wood. Pushpa single-handedly hides the precious red sandalwood from them and doesn’t even open his mouth even though the cops beat him black and blue. Konda Reddy (Ajay Ghosh) runs the smuggling business and Pushpa Raj is their labourer. When he finds out about Pushpa’s bravery, he sends his younger brothers, Jolly Reddy (Dhananjay) and Jakka Reddy, to get his bail done. Pushpa demands Rs. 5 lakhs to reveal the place where he hid the red sandalwood. The brothers agree. Soon, he becomes an important member in Konda Reddy’s gang as he tells them innovative ways of transporting the red sandalwood while avoiding the prying eyes of the police. On the other hand, Pushpa falls for Srivalli (Rashmika Mandanna), who runs a milk business. Meanwhile, Konda Reddy sells the red sandalwood to Mangalam Srinu (Sunil). Srinu is the one who gets the consignment safely to Chennai. Pushpa learns that Srinu earns as much as Rs. 2 crore for every ton of red sandalwood that he sells to Murugan at Chennai port. Srinu, however, pays just Rs. 25 lakhs per ton to Konda Reddy. Pushpa suggests to Konda Reddy that Srinu should insist that he should be paid more. Konda Reddy is apprehensive as he feels it’ll strain his relations with Srinu. Also, Srinu can be quite a menace. Hence, he sends Pushpa to talk to Srinu. At Srinu’s place, all goes wrong and it signals the beginning of a long bloodbath between the two gangs. What happens next forms the rest of the film.

Sukumar’s story is a case of old wine in a new bottle. The idea of a man who rises from nothing and turns into a crime lord has been beaten to death in many films. Sukumar, however, adds his touch and introduces certain powerful characters to keep the interest going. Sukumar’s screenplay is topnotch. He has infused excellent entertaining and thrilling moments and ensures that viewers get their money’s worth. He compensates for the clichéd storyline with the jungle and red sandalwood smuggling setting. This factor helps the film to stand out as something of this sort has rarely been seen in our films. Rajendra Sapre’s Hindi dialogues are terrific and add to the fun quotient. Special mention should also go to dubbing director Abul Hasan Ansari as the dub has been carried out very neatly.

Sukumar’s direction is excellent and, as expected, very massy. The film is mounted on a grand scale and he handles the scale perfectly. He leaves no stone unturned when it comes to showing the hero worship in all its glory. Such films are expected to show their heroes in the massiest avatars and PUSHPA: THE RISE – PART 01 is no exception. However, in the quest to show off Allu Arjun’s bravado and the scale of the film, he doesn’t sacrifice storytelling. The film is nearly 3 hours long but keeps one engaged from start to finish. There’s a lot happening in the film and Sukumar doesn’t leave any scope for boredom. On the flipside, the film has too many characters and it becomes too much, although it probably was done as a sequel is also in the offing. The film drags at places and could have had a faster narrative. The romantic track raises laughs but overall, is not as entertaining as the other tracks. Also, the Hindi audiences are used to watching progressive cinema and some of them might have reservations with some of the scenes of Srivalli, in the first half.

PUSHPA: THE RISE – PART 01 starts off by explaining in a simple manner and through animation why the red sandalwood business is much sought after. Pushpa’s entry, as expected, is heroic. The way Pushpa outsmarts DCP Govind not once but twice is quite fun. A scene that stands out here is when Pushpa throws the red sandalwood in the jungle; the way it has been executed has to be seen to be believed. The film, however, also has a strong emotional quotient and the scene where Pushpa’s step brother humiliates him and his mother on the day of his marriage arrests attention. The best scene of the first half is reserved during the intermission point. Single-screen cinemas would go in a frenzy at this point. The film drops from here but thankfully, picks up in the scene where Pushpa bashes up Jolly Reddy. This is followed by the forest and funeral sequences. These three scenes take the second half to dizzying heights. The entry of Bhanwar Singh Shekhawat (Fahadh Faasil) initially slows down the film. However, the climax is powerful and excites audiences for the sequel.

Rashmika on working with Allu Arjun: “It was a LEARNING journey, it was FASCINATING to…”| Pushpa

Allu Arjun is in superb form. He is a big star down South but has a considerable following among Hindi speaking audiences. And with his massy avatar, he impresses one and all. His look is quite dashing, his action top-class and his comic timing is spot-on. His dubbing is done by Shreyas Talpade and it contributes to the entertainment quotient. Rashmika Mandanna gives a confident performance and this is an apt film to be introduced to the Hindi audiences before her Bollywood debut next year. Fahadh Faasil has a small but significant role. He’s known for his flawless performances and even here, he’s at his best. Ajay Ghosh is decent while Dhananjay and Sunil leave a mark. Rao Ramesh (MLA) is memorable in the funeral scene. Anasuya Bharadwaj (Daksha; Srinu’s wife) is too good as the foul-mouthed wife. The actors playing Keshav (Pushpa’s sidekick), Jakka Reddy, Parvati Devi, Muletti Venkatraman, Murugan and Moglis are great. Samantha Ruth Prabhu is sizzling

Devi Sri Prasad’s music is not of chartbuster variety, at least when it comes to the Hindi soundtrack. All songs, however, are well shot. ‘Jaago Jaago Bakre’ comes at a clapworthy moment. ‘Srivalli’ comes up suddenly but is worth a watch especially for Allu Arjun’s dance. ‘Eyy Bidda Ye Mera Adda’ comes next. ‘Saami Saami’ is okay but the sets are picturesque. ‘Oo Bolega Ya Oo Oo Bolega’ is forgettable. Devi Sri Prasad’s background score enhances impact.

Miroslaw Kuba Brozek’s cinematography is breathtaking. S Rama Krishna and Monika Niggotre’s production design is realistic and yet cinematic. Resul Pookutty’s sound designing could have been better; in certain scenes, the dialogues are not fully audible. Ram-Laxman, Peter Hein, Dragon Prakash and Real Satish’s action is one of the film’s USPs as it is imaginative, novel and mainstream. Deepali Noor’s costumes are authentic. Karthika Srinivas R and Ruben’s editing is appropriate but could have been a bit slicker.

On the whole, PUSHPA: THE RISE – PART 01 [Hindi] is a paisa vasool entertainer and rests on Sukumar’s expert direction, action and Allu Arjun’s starry presence.