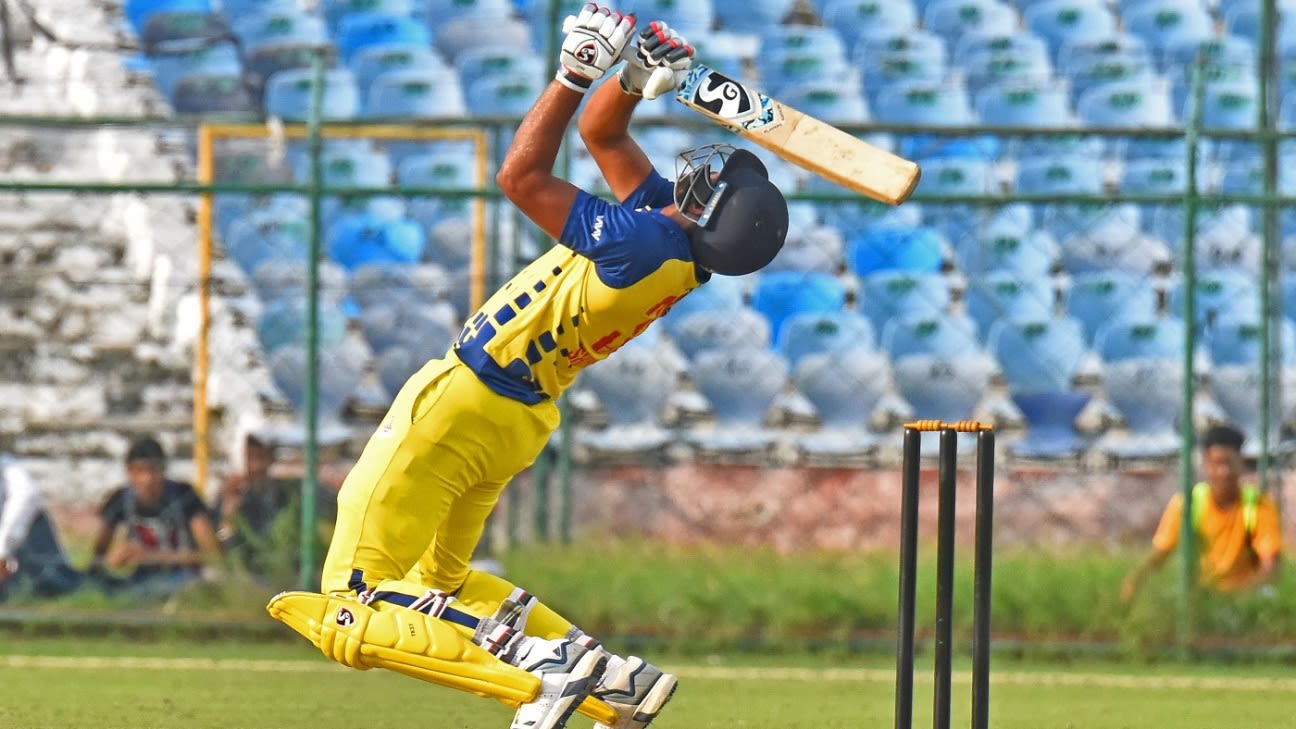 Another Karnataka vs Tamil Nadu Syed Mushtaq Ali Trophy final. Another last-ball thriller. After suffering a heart-breaking one-run defeat in 2019 in Surat, Tamil Nadu snatched victory this time in Delhi, thanks to a blockbuster last-ball six from their designated finisher M Shahrukh Khan.

With five needed off the last ball, Shahrukh picked up a full ball from left-arm seamer Prateek Jain and smote it over the square-leg boundary, powering Tamil Nadu to the title and underscoring his status as one of the best finishers in Indian domestic cricket.

When Shahrukh had entered at 95 for 4 in a chase of 152, his captain Vijay Shankar and vice-captain N Jagadeesan had holed out off successive balls and the asking rate had ballooned past 12. Shahrukh, however, pricked it quickly, shellacking one four and three sixes in his unbeaten 15-ball 33.

Upon hitting the winning runs, Shahrukh swiped his bat and gloves away and sprinted off, towards square leg, until he was finally stopped in his tracks by his team-mates.

There was a method to Shahrukh’s madness. He stood very still and deep in the crease, and when the Karnataka bowlers erred with their lengths, he held his shape and muscled them down the ground. He was also aiming long-on for the winning six, but with Jain straying on his pads, he swatted it much squarer. It was exactly the sort of performance he would have backed himself to pull off – after all, Shahrukh has been training hard for the finisher’s role, gymming with his strength and conditioning coach Azhariah Prabhakar and running in the streets of Chennai.
But the target seemed beyond their reach when Tamil Nadu went 50 balls without a boundary. Jagadeesan tiptoed to 41 off 46 balls and Vijay to 18 off 22 balls. The Karnataka seamers made life more difficult for the batters by varying their pace smartly and hiding the ball away from the swinging arcs. It was KC Cariappa who dismissed Vijay and Jagadeesan off back-to-back balls with his side-arm darts. The mystery spinner ended with 2 for 23 in his four overs, taking his season’s tally up to 12.
Shahrukh, however, changed the script. And he found late support from R Sai Kishore, who hit a no-look sliced four off the first ball of the last over. Jain cracked under pressure as he sent down two leg-side wides before Shahrukh closed it out in grand style.

It was Sai Kishore who had set up the final beautifully for Tamil Nadu by bowling Rohan Kadam (0) and Manish Pandey (13) in the powerplay. The left-arm fingerspinner found grip and turn with his first ball to knock over Kadam before besting the Karnataka captain with the swinging arm ball. With T Natarajan recovering sufficiently from his knee injury to join the action, Sai Kishore slipped back into his new ball role and then came back to take out BR Sharath in the middle overs.

While Sai Kishore was accurate with his lines and lengths, coming away with 3 for 12, Natarajan struggled, ending with 1 for 44. He came in for punishment from Abhinav Manohar and Pravin Dubey, as did Sandeep Warrier. Tamil Nadu wound up leaking 42 off their last three overs and, another day, it could have hurt them big time. Shahrukh made sure it didn’t.
Tamil Nadu’s second successive Syed Mushtaq Ali title win was a testament to their incredible depth. For example, there were no places in the final for medium-pacer P Saravana Kumar, who bagged a five-wicket haul in the semi-final on Saturday, and left-arm fingerspinner M Siddharth, who scooped up 4 for 20 in last season’s final.

Deivarayan Muthu is a sub-editor at ESPNcricinfo