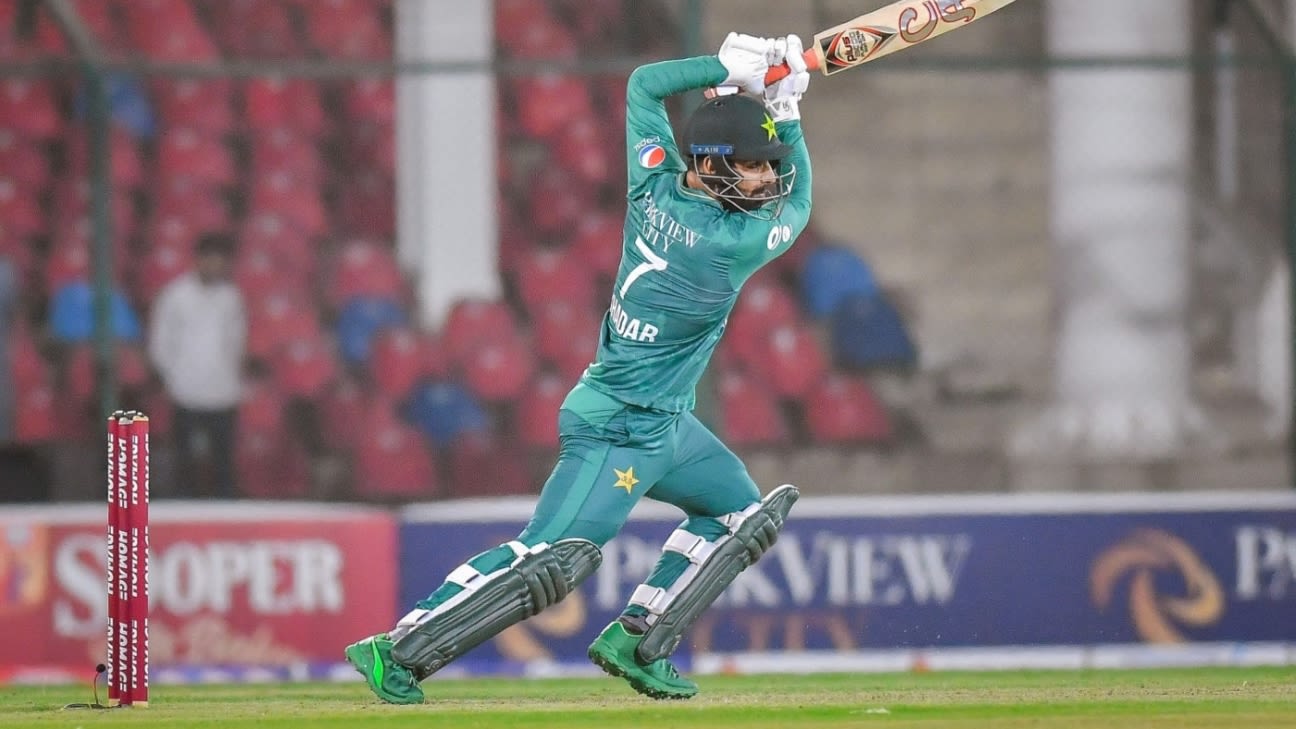 His cameo 12-ball 28 set the game up, before his thrifty 0 for 22 applied the brakes on West Indies

For the second night in a row, Pakistan’s well-rounded bowling attack saw the home side successfully defend a total, and in the process gave the hosts an unassailable 2-0 lead over West Indies in the three-game T20I series.

Ten overs into the chase, West Indies seemed on course to chase the 173 target down courtesy opener Brandon King‘s elegant strokeplay, but it all unravelled rather quickly thereafter.
Shadab Khan strangled the batters with 0 for 22, Mohammad Nawaz got crucial wickets, Mohammad Wasim Jr bowled to his plans, Shaheen Shah Afridi claimed three middle-order victims in one over and Haris Rauf dismissed King – and the tenth wicket off the game’s last ball – to seal the deal for Pakistan.

In retrospect, though, Shadab’s more crucial contribution came with the bat and not the ball. His 12-ball cameo of 28 in the first innings ended up being the difference between the two sides with Pakistan winning by only nine runs.

On Monday, Hosein got Babar Azam for zero in his spell of 1 for 19. Tonight, he indirectly effected Babar’s dismissal for 7 when he strangled the run-scoring from one end after Pakistan chose to bat. Mohammad Rizwan looked to rotate the strike and ended up running his opening partner out in the third over when they took on Hayden Walsh Jr’s arm from backward point. Hosein mostly bowled length deliveries that drifted into the right-handers when the ball was brand new, cramping them for space to free their arms.

When Fakhar Zaman came in, West Indies captain Nicholas Pooran persisted with Hosein despite what conventional wisdom suggests for a left-arm fingerspinner. He dragged back a delivery’s length – in the first ball of the fifth over – after spotting Fakhar giving him the charge, and the away movement in the air took the ball past the bat for Pooran to stump him. Hosein bowled four straight overs after taking the new ball, and was done for the evening by the seventh over, taking 1 for 16 with 14 dot balls. At the time, Pakistan’s score read 55 for 2 and with Rizwan and Haider Ali at the crease, the situation was eerily similar to the first T20I.

But it wasn’t to be like the first T20I where Rizwan and Haider struck exquisite fifties to lift Pakistan to 200. Instead, Rizwan fell for a 30-ball 38 off sixth bowler Odean Smith’s first delivery of the match, just when he looked to accelerate. In Smith’s next over, Haider was caught at deep point for a struggling 34-ball 31. Neither of those were wicket-taking deliveries though, Rizwan was out to a wide slower ball that he bunted to cover and Haider had almost enough in his shot for a six after heaving a wide ball over point.

The 15th over brought another wicket with Nawaz sweeping a Walsh delivery strongly, but was gone for 1 after finding the only fielder in the deep on the leg side. With three wickets falling for 25 runs, it seemed that Pakistan would miss out on the impetus they needed for a big whirl in the death overs.

Iftikhar, Shadab turn it on

Iftikhar Ahmed, though, kept playing his shots despite the wickets falling around him. He came in after Rizwan’s wicket, and punished Walsh’s half-tracker early for four. He then kept the score ticking along with quick running between the wickets in Asif Ali’s company. And when Oshane Thomas brought back some extra pace in the 18th over, he punished the tall right-arm quick by drilling two sixes over deep midwicket and long off. However, just when Iftikhar looked to give Pakistan a big flourish, he was gone, caught behind off Thomas’ last ball of the over for a 19-ball 32.

With two overs to go and Pakistan having gained some momentum after the middle-overs trouble, Shadab took over from where Iftikhar left off. The 19th began with Shadab hitting a four and a six, and the 20th saw Shadab smacking Romario Shepherd over long on and long off for two sixes. Shadab uses the depth of the crease to get under the ball, and his 12-ball cameo of 28 lifted Pakistan to a competitive 172 for 8.