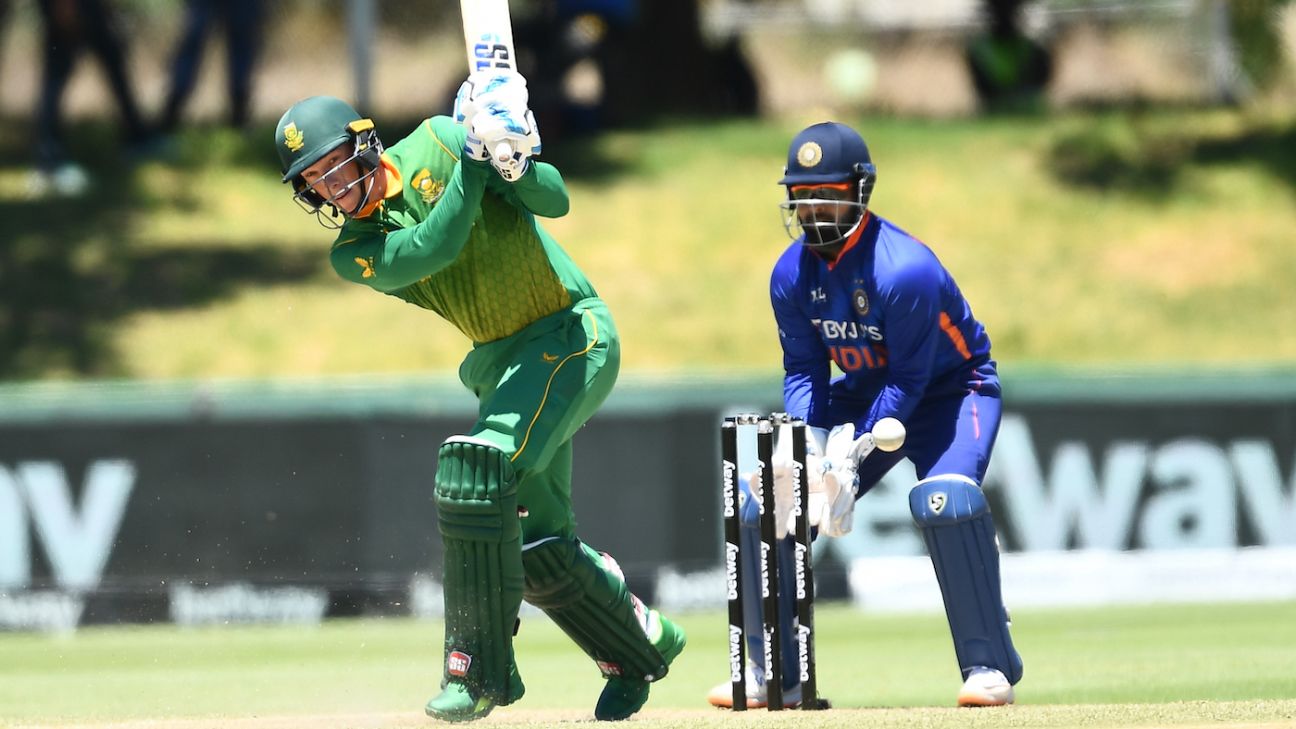 The pair’s centuries came in contrasting styles, but both contributed to India wilting in hot conditions in Paarl

A sparkling century from Rassie van der Dussen was complemented by a well-paced one from Temba Bavuma, as South Africa shrugged off a rickety start to pile on the runs and set India a steep target.

van der Dussen joined Bavuma when South Africa were 68 for 3 in the 18th over, with the Indian bowlers’ discipline making run-scoring arduous. By the time the innings ended, only one more wicket had fallen, and South Africa had built an imposing total of 296 for 4 while van der Dussen was unconquered on an ODI best 129 off just 96 balls. His innings included four hits over the fence and nine to it, with more than half his runs had come via running between the wickets – this on a day when the heat was sapping. In the final over, van der Dussen was often down on his haunches to gather his breath. It was his batting that left those watching breathless though.

He got off the blocks quickly, injecting much-needed momentum into the innings, using the sweep to devastating effect against the spin duo of Yuzvendra Chahal and R Ashwin. He punished anything that was full with conventional as well as reverse sweeps. He was uncertain early in his innings, but while he poked and prodded as he settled in, he didn’t let the uncertainty stifle his scoring. For an innings that seemed to be dragging, van der Dussen’s approach was exactly what was needed. He was scoring at a run-a-ball pretty much from the start of his innings, and he further picked up the pace as the innings went on. The feature of van der Dussen’s innings was how he took the pitch out of the equation. Till his arrival, scoring had been laborious. But his use of the square boundaries, and ability to capitalise on the slightest errors in length, meant the innings found a new gear.

The heat in Paarl saw the Indian bowling also wilt after a good start, as van der Dussen continued to go full throttle. Bavuma, who was on 23 off 45 when van der Dussen joined him and later on 28 off 53, gradually picked up his pace too. He made 82 from the last 90 balls he faced, playing an able foil to van der Dussen. By the time he had holed out off Bumrah, the two had added 204 runs in just 183 balls. Bavuma went for 110 off 143, but there was no dislodging van der Dussen.

Bavuma had a head start on his innings and got to his century first, with a single off Shardul Thakur in the 45th over. At the start of the 48th over, van der Dussen got to his own hundred with a flick to fine leg.

India’s bowling had begun well, with Jasprit Bumrah and Bhuvneshwar Kumar keeping things tight, not letting the batters break free. Bumrah got Janneman Malan nicking behind, and the returning Ashwin – playing his first ODI since 2017 – castled Quinton de Kock with a quicker one. When Aiden Markram ran himself out via a direct hit from debutant Venkatesh Iyer at mid-off, India seemed well in control.

However, the van der Dussen and Bavuma rebuilding plus counterattack left India looking a bit ragged. There were several mis-fields and overthrows too, which eased any pressure that was built up. KL Rahul, captaining India for the first time, opted not to use his sixth bowling option in Venkatesh, even when the regular bowlers were being milked for runs fairly easily. He brought back Bumrah and Bhuvneshwar earlier than he would ideally liked to, with the result being that by the time the innings was 40 overs old, the duo had already bowled eight overs each. Eventually, 86 runs came off the final ten overs, including a 17-run final over by Thakur.

On a pitch that showed signs of slowness and turn, India will need to match van der Dussen’s explosiveness to have a shot of chasing the target down.