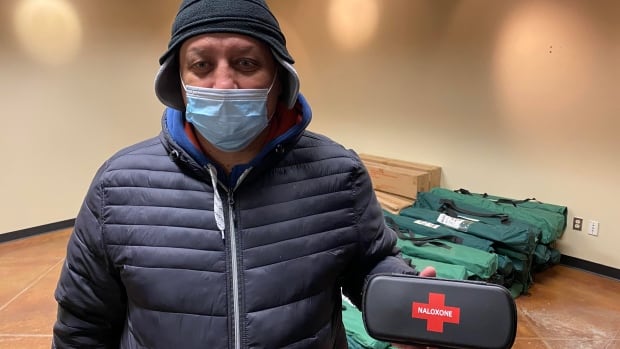 City council has approved a 50-bed emergency shelter to be run by the Saskatoon Tribal Council in the city’s downtown.

In a unanimous decision on Thursday, council voted to lease an unoccupied city-owned building to the tribal council until the end of April.

The Temporary Emergency Wellness Centre will be located on 1st Avenue N. and will be able to house 50 homeless people. The centre, which is expected to open on Monday, will operate 24 hours a day, seven days a week, and will offer health and counselling services, meals and a warm place to sleep.

“It’s the least we can do, in my mind,” Coun. Troy Davies said. “The tribal chief and the seven chiefs that make up the Saskatoon Tribal Council see their members on the streets, and they don’t want anybody dying.”

‘This place is going to be full’

Speaking after the meeting, Tribal Chief Mark Arcand said he was pleased that council had approved the lease and that the tribal council can get to work.

“We know this place is going to be full,” Arcand said.

“We want to provide as much support, really dealing with mental health and addiction and trying to work on social assistance income so they can be properly funded and move into their own homes.”

Arcand said it’s important that an Indigenous group run the shelter, as they better understand how to deal with the effects of residential schools.

“I think we have a better understanding about how we can deal with our people,” he said.

Seeing the poverty, neglect, the lack of housing and funding on First Nations firsthand, enables them to understand why people leave communities for the city, he said.

“It’s best that an Indigenous agency leads by example and helps our people and brings people support,” Arcand said.

The tribal council is asking the federal and provincial government for $1.4 million to staff the shelter this winter, but has not received an official response yet. Arcand was hopeful that now that the City of Saskatoon has contributed to the program, other levels of government will step forward.

The shelter is expected to cost the city $80,000, which includes extending the lease on private buildings currently housing city workers that were expected to move into the unoccupied office building, as well as upgrades to the building’s fire alarm system.

During the meeting, council also agreed to pay a $9,000 per month occupancy cost, that includes utilities which would have been charged to the tribal council. The total cost of the shelter to the city is expected to be about $150,000.

Council has agreed to lease the building for a nominal fee of $10 a month.

The placement of the shelter in the city’s downtown was controversial. During the council meeting, many councillors said they had been approached by downtown business owners who worried that the shelter would drive away business.

Brent Penner, executive director of the Downtown Saskatoon Business Improvement District, said he was frustrated by a lack of attention paid to the issue over the years.

“It will keep people warm, and that is critically important. But it may hurt some people that are just trying to run a business at a time when it is an incredibly hard time to do that.”

While councillors sympathized with businesses, they stressed that all parties, including the Saskatoon Tribal Council, wanted to keep the shelter out of the downtown area, but realtors could not find a willing landlord interested in a short-term lease.

“I put a lot of stock in that this is temporary,” said Coun. Randy Donauer. “I do think that concentrating too many programs too close together can be probematic.”

Tribal Chief Arcand said he is doing his best to alleviate concerns. He plans on paying commissionaires to patrol the outside of the building and will have security cameras set up inside and outside the building.

Saskatoon is currently dealing with a sharp rise in homelessness. So far this winter, teams of Saskatoon firefighters, as well as the Saskatoon Tribal Council’s Saweyihtotan program, social workers and others, have made 75 visits to homeless encampments in the city.

Coun. Hilary Gough, council’s lead on community safety and wellbeing, said there were a number of factors that led to the rise in homelessness, including changes to provincial assistance programs, increased addictions and the COVID-19 pandemic.

She said the provincial government needs to take another look at increasing assistance rates.

“The income people are being provided is not sufficient to rent even affordable units,” Gough said. “The lack of these supports absolutely puts a strain on workers in the non-profit sector who are working to help transition people back into housing.”

Last month, the provincial government changed its assistance program to allow direct payments to landlords in some cases, rather than have the money go directly to recipients.

Under SIS, a single adult in Saskatoon and Regina receives $575 a month for shelter and utilities and another $285 a month for food and all other expenses.

The City of Regina recently approved a 50-bed shelter to deal with homeless people after a large tent city was set up there.