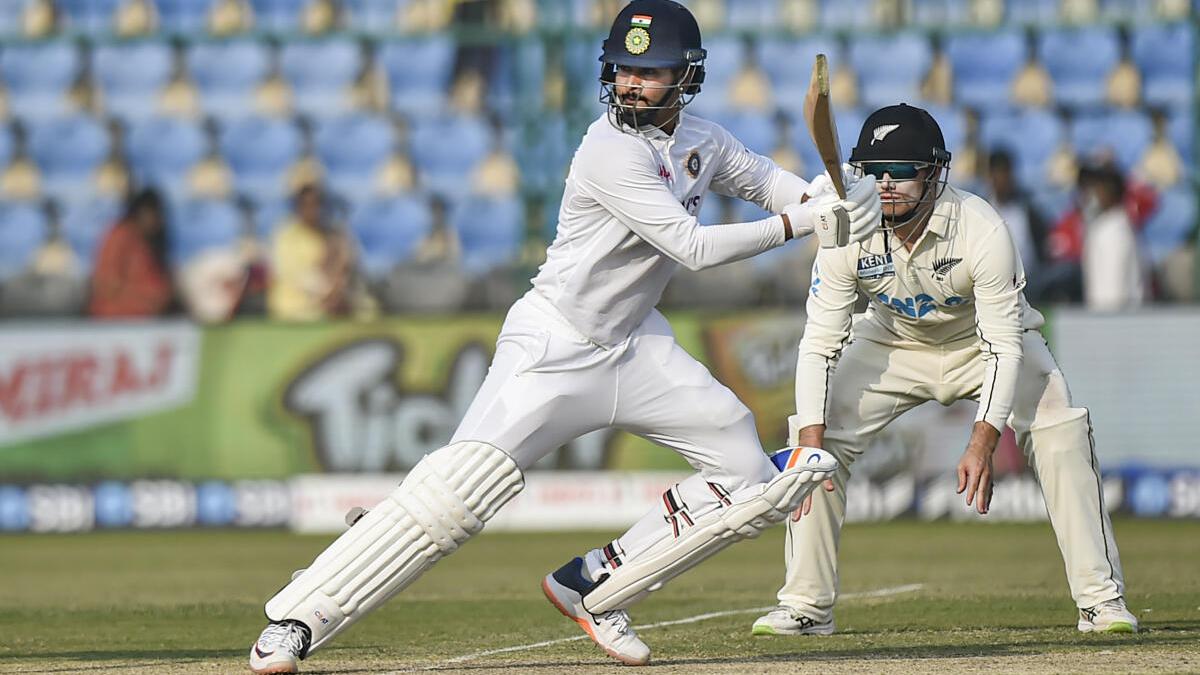 On Thursday morning, as the iconic cricketing venue in Kanpur hosted a Test match after five years, it also marked the Test debut for Iyer. And the 26-year-old made the most of the opportunity, slamming an unbeaten 75 as India ended the day on 258 for four.

Against a formidable New Zealand bowling line-up, Iyer was guts, aggression, and flair rolled into one.

As Iyer stitched partnerships – first with Ajinkya Rahane and later with Ravindra Jadeja – it brought back memories of a December 2014 afternoon, where he had helped Mumbai bounce back in a Ranji Trophy fixture against Uttar Pradesh. He batted with Shardul Thakur to turn the tide.

It was Iyer’s debut season, and Mumbai had suffered a defeat against Jammu and Kashmir in the earlier game. Coming to Kanpur, in response to UP’s 206, Mumbai was eight down for 173, before Iyer’s 75 and Thakur’s 87 helped the side gain lost ground.

That innings played a key role in Iyer’s career. He made the Indian team in 2017, but he had to wait for the Test cap.

As Iyer stamped his class against the New Zealand bowlers on Thursday, it was also an emotional moment for his coach Praveen Amre. I

Interestingly, Amre was the coach of Mumbai in 2014 and was part of that match. “The result is a happy ending, but the going was not that easy. In 2014, Shreyas played that innings in Kanpur after a not so (memorable debut) for Mumbai. Now also, he played red-ball cricket after nearly two years. But it was good to see him bat, and on both the occasions, his contribution was immense,” Amre told Sportstar.

“In 2014 too, he came to Kanpur knowing that if he missed that opportunity there, then he would not perhaps make it again. This time too, had Virat (Kohli) been available for the Test, he may not have featured in the side. So he knew how important this opportunity was for him,” Amre, a former India international, said.

“Having an in-form batter in the side is always good. But you also need a senior player. Shreyas has done whatever was in his hands,” Amre said.

The last few months were challenging for Iyer, who underwent shoulder surgery earlier this year after suffering an injury during the limited-overs series against England in March. As a result, he had to miss out on a large part of the season.

“For any cricketer, the operation and the recovery phase is most painful. More than physical, it is mental pain. What was worse for Shreyas was that he had scored a half-century in the previous match and looked in good touch, and that’s when he suffered the injury. After the surgery, even he did not know what to do and how to overcome it,” Amre reminisced.

While he followed the instructions from the doctors and the physios at the National Cricket Academy, Iyer slowly started training with Amre at the Mumbai Cricket Association’s Bandra-Kurla Complex facility. “We knew that September 19 was the first match of the IPL, so we started two months early at the BKC. Even as it rained, we trained indoors. His workload management was important, and as a coach, even I had to be careful. We planned the sessions together with physios and trainers,” Amre said.

Hard work paid off as Iyer returned to the IPL for Delhi Capitals and earned the Man of the Match award in the second game. While he was not part of the T20 World Cup, Iyer had long discussions with Amre before joining the Indian team bubble for the Test series against New Zealand.

“The biggest challenge was that he played red-ball cricket for the last time in 2019. Then there was COVID, and also he was injured. But he worked hard. He knows how he waited for this opportunity. He came into the team in 2017 and had to wait for four years for this. For any player, it is a dream to play Test cricket.”

Even though the conditions were challenging for batters, Iyer made his Test debut memorable. “The situation was different, and the ball was not coming on to the bat. The wicket was low and slow, but he applied (and executed the plans) very well and went on building partnerships with Rahane and Jadeja,” Amre said.