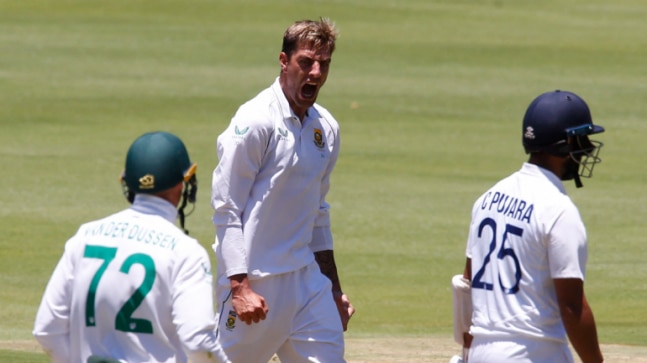 South Africa vs India: Duanne Olivier took 3/64 to help restrict India after they had won the toss and chosen to bat on the opening day of the second test at the Wanderers. It was his first international match since February 2019.

Duanne Olivier admitted that he was nervous at the start of the second Test against India on Monday. It was his first international match in nearly three years and he ended up taking three wickets as South Africa restricted India to 202 at the Wanderers.

“To be honest, it felt like a debut and I was very nervous today,” he told a virtual news conference after the close of play on Monday.

“For me it’s just trying to have good energies on the ball and to put the team in the best position.”

Olivier was instrumental in shifting the momentum in South Africa’s favour in the first session, getting the wickets of senior India batters Cheteshwar Pujara and Ajinkya Rahane off consecutive deliveries. He then dismissed Shardul Thakur later in the day to make it three on international return.

The 29-year-old said that South Africa were consciously trying to force the Indians to play at deliveries more than they did in the first Test, which they lost by 113 runs. The Proteas are looking to avoid a first-ever Test series defeat at home to India, trailing 0-1 in the three-match series.

“I had certain patches that were good and certain that weren’t that good but there is the second innings still to come and it is there that I will look to do things better.

“The message was simple: try and make them play more,” Olivier confirmed. “So we have improved and we want to improve more,” said Olivier.