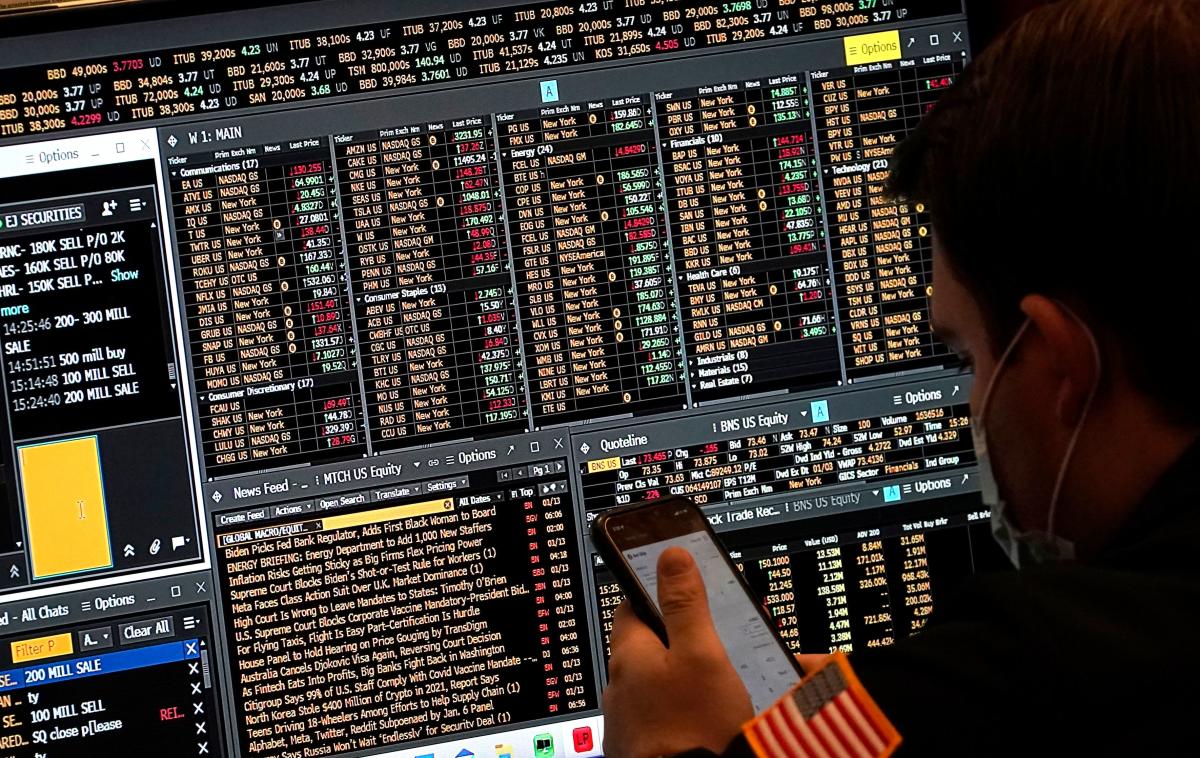 U.S. stocks fell sharply Tuesday morning as investors geared up for a holiday-shortened week rife with quarterly earnings reports from companies across all three major indexes.

The Dow Jones Industrial Average plunged more than 500 points and the tech-heavy Nasdaq shed 1.7% as Wall Street continued to weigh the likelihood of sooner-than-expected interest rate hikes. The S&P 500 also edged lower, declining more than 1%. Meanwhile, the yield on the benchmark 10-year Treasury rose to its highest level in two years — up to 1.84%

Wall Street was closed on Monday in observance of Martin Luther King Jr. Day but resumed trading Tuesday amid a flurry of corporate results unveiled ahead of the session: Goldman Sachs (GS), PNC Bank (PNC) and Bank of New York Mellon (BK) released earnings reports for the last three months of 2021 before market open.

Goldman Sachs (GS) reported fourth-quarter earnings that fell below analyst expectations — reflecting a decline in profit for the last three months of the year due to weakness in its trading arm, adding to a lackluster lineup of recent bank results.

With earnings season in high gear, investors will set their focus on company profits and other corporate metrics, shifting away — at least temporarily — from worries around the Federal Reserve’s tightening of monetary policy and economic uncertainty that have rattled stocks in recent weeks.

“I think a lot of rationality tends to come back around earnings season,” OANDA market analyst Craig Erlam told Yahoo Finance Live. “That’s when people will start to get a better grasp, or at least start to maybe look at markets through a more rational lens, and we could start to see a bit of normality return for the markets.”

Worries over sooner-than-expected interest rate increases have weighed on equity markets in 2022 so far. The S&P 500 is down 2.79% year-to-date, while the Dow has lost 1.84%. The Nasdaq has shed a whopping 5.93% since the start of this year, with more than one-third of companies in the index at least 50% from their 52-week highs, according to Bloomberg data.

Still, the outlook for 2022 remains positive among strategists who anticipate that although the year is unlikely to match the blockbuster returns of 2021, stocks are in good shape for solid returns ahead.

“From an economic perspective 2022 will look like a moderated version of last year, but investors should be cognizant that the prevailing tailwinds are beginning to calm,” Charlie Ripley, senior investment strategist for Allianz Investment Management, said in a note. “Lingering effects from the pandemic are likely to bleed into 2022, but the outright threat from COVID-19 to the economy will continue to fade.”

“Risk assets will likely have positive returns in the post-COVID economy, but headwinds are picking up and performance will be choppier than in past years,” he added.

On the economic front, investors will also tune in to fresh data out of Washington due out Tuesday, including fresh reads on the New York Federal Reserve’s Empire Manufacturing Index and the National Homebuilders Association’s Housing Market Index.

The Department of Treasury is also set to report its latest print on Net Long-Term TIC Flows, which tracks the flow of Treasury and agency securities, corporate bonds and equities, into and out of the United States.

Exercise equipment manufacturer Peloton Interactive (PTON) has solicited consulting firm McKinsey & Co to review its cost structure in a move that may lead to job cuts, according to a report from CNBC.

The company wiped out more than 75% in market value last year in 2021 amid lower demand for bikes as consumers gradually returned to pre-pandemic habits. As a result, Peloton has also slashed its full-year outlook by up to $1 billion in November, attributing the change to a faster-than-expected slowdown in purchases of its equipment.

U.S. airline stocks fell in morning trading to mark the second straight session of losses, putting the sector on pace for its biggest two-day drop in more than a month, according to Bloomberg data.

The S&P Supercomposite Airlines Industry Index (S15AIRL) lost as much as 1.9% at open after the index closed down 2% on Friday, per Bloomberg. The index is now down as much as 3.8% across two sessions, the biggest two-day drop since December 14.

In addition to taking a hit on broader declines spurred by interest rate worries, airlines have also been battered by several other factors, including winter weather, virus disruptions, and the impending rollout of 5G, which could cause major issues for the aviation industry.

The National Association of Home Builders/Wells Fargo Housing Market index showed that confidence among U.S. single-family homebuilders declined in January after four months of consecutive increases on the print.

According to the trade association, higher material costs and shortages added weeks to typical single-family construction times as the U.S. economy struggled with rising inflation and backed-up supply chains.

The index dipped one point to 83 this month. A reading above 50 indicates that more builders view conditions as good than poor.

Shares of entertainment company Activision Blizzard (ATVI) jumped after Microsoft (MSFT) said it will acquire the company in a deal valued at $68.7 billion, marking the software giant’s largest takeover yet. Microsoft is expected to buy the video game publisher for $95 per share.

Upon closure of the deal, Microsoft is poised to become the world’s third-largest gaming company by revenue, behind Tencent (TCEHY) and Sony (SONY), the tech giant said. The deal marks another consolidation move within the gaming industry — and massive bet on the future of the metaverse.

Here were the main moves at markets as trading reopened after the holiday weekend:

Goldman Sachs (GS) reported fourth-quarter earnings that fell below analyst expectations — reflecting a decline in profit for the last three months of the year due to weakness in its trading arm. Still, the investment bank’s robust deal activity helped it post record full-year profits.

Shares of Goldman Sachs were down more than 2.5% ahead of open to about $381 a piece.

The company’s results showed net earnings applicable to common shareholders fell to $3.81 billion in the period ending December 31, from $4.36 billion the quarter a year earlier. Earnings per share fell to $10.81 from $12.08 the prior year.

Consensus analyst estimates expected the bank to report adjusted earnings of $11.65 per share on revenue of $12.010 billion, according to Bloomberg data.

7:00 a.m. ET Tuesday: Contracts on all three major indexes decline ahead of open

Here were the main moves in futures trading Tuesday morning:

Read the latest financial and business news from Yahoo Finance