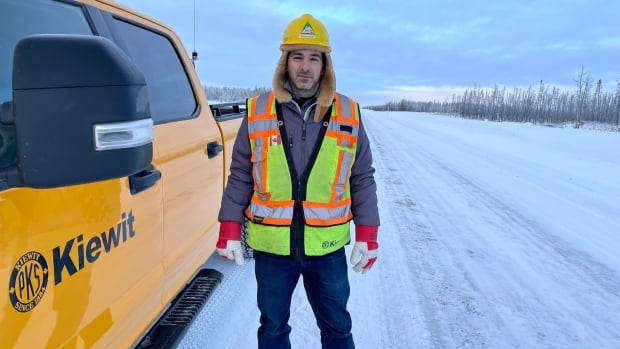 Building the newly opened 97-kilometre Tłı̨chǫ Highway was an engineering challenge, but if you ask project manager Bruno Pigeon, the success of the project was built on relationships.

The Tłı̨chǫ Government, the government of the Northwest Territories and the company Pigeon works for, Kiewit Canada Development Corp., teamed up and created the Tłı̨chǫ-Kiewit general partnership to build the road that connects Whatì, N.W.T., to the territory’s Highway 3.

“It was the right thing to do. And there’s a lot of highly talented individuals, really good workers, but mainly really good people that we met,” said Pigeon.

One example was Wes Pellisey, a member of the Pehdzeh Ki First Nation in Wrigley and owner of the contracting company Brave Adventures. Pigeon said Pellisey helped his team understand the scope of work to be done.

“He knows the area really well.”

Pigeon and his team would walk in front to make sure there was no wildlife before Brave Adventures cleared the trees.

“And so from one day to the other, it changed a lot,” Pigeon said, noting it transformed from a single pickup truck trail to a space that was about 50 metres wide.

By December, they had already built 20 kilometres of road and by Christmas, they had a pioneering trail all the way to kilometre 85, the La Martre River Bridge.

“That was a critical piece for us,” said Pigeon, “to get an access there so that we could see the main river and get our planning going for the construction of the bridge.”

The La Martre River bridge is the fourth one on the highway but it was the most difficult to build, said Pigeon. He said it had to be 58 metres long and made out of steel.

The construction team only had access to the bridge from one side of the river, so they built a second temporary bridge to get the crane across, to access materials, to build the abutments and to install the bridge.

‘I’m not going to lie, it wasn’t the funnest camp’

Pigeon said they wanted to avoid bringing COVID-19 to the communities at all costs so they stopped flying in specialty workers for the project.

During that spring, the people who were already at the there finished the critical work, said Pigeon, and then there was a six-week break to understand what was going on and to put in a COVID-19 plan.

“We put up a lot of measures,” said Pigeon. “I’m not going to lie, it wasn’t the funnest camp.”

They shut down the camp’s rec room and divided people into groups of 12 who would work, travel and eat together. That way, if someone got infected, they could contain it quickly.

“It was a major disruption, but it went really, really good because we had that good working relationship where we could tackle these issues together,” said Pigeon.

There were no COVID-19 cases at the Tłı̨chǫ Highway campsite until this past summer during the outbreak that hit Yellowknife and Behchokǫ. One worker who was from Behchokǫ was infected, as well as two others, but they all recovered.

“It was a good scare, but that was it, so we’re extremely proud,” said Pigeon.

‘We really learn from each other’

Pigeon said it was always a goal of the Tłı̨chǫ-Kiewit general partnership to provide training opportunities. But he’s quick to point out the learning went both ways.

“We really learn from each other,” said Pigeon. “We learn from them how to be on the land, how to be in the winter.”

In 2019, they did some heavy equipment operator training near Whatì with 12 students for 12 weeks.

When COVID-19 hit, they shifted to online training. They had 24 students follow an online class for construction management.

“We got some pretty good feedback from that, too,” said Pigeon.

Kelvin Lafferty, 32, from Behchokǫ, has been working on the highway as an operator since the start.

He said it was both fun and hard work, as well as a learning opportunity.

“It’s been kind of tough being away from family but overall, we get to gain knowledge and a little bit of money in your pocket.”

Now that the highway is completed, he’s working on the maintenance crew.

“Overall, everything is going good so far,” he said.

“It’s history for the Tłı̨chǫ,” he said. “It brings the community together because if you just want to go to Whatì, you can just drive, that’ll be so much better.”

In their regular discussions with the Tłı̨chǫ Government, Pigeon said they came up with the idea of leaving a landmark near the highway to celebrate its construction and the partnership that led to it.

They worked with a design firm to create a teepee with a welcome to Tłı̨chǫ sign on it. Then they went back and forth on it with the Tłı̨chǫ Government and the government of the Northwest Territories to fine tune it.

“It’s a cool landmark,” Pigeon said. “I think something that everybody from Tłı̨chǫ can be proud of.”