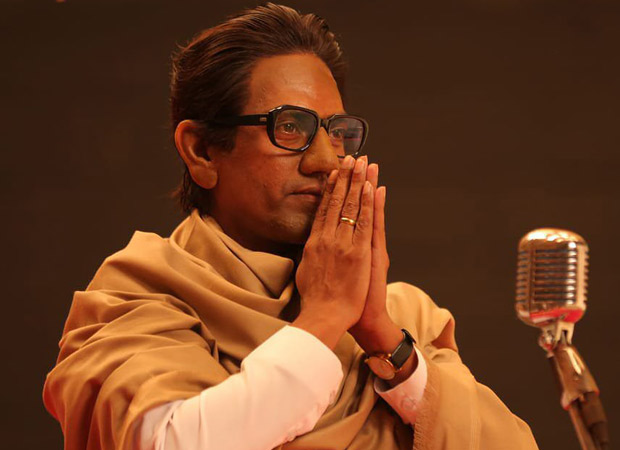 Since Thackeray is a biopic, one basically expects situational soundtrack for the film which would basically glorify the subject in question, Balasaheb Thackeray. Composers Rohan-Rohan [Rohan Pradhan and Rohan Gokhale], who had earlier composed a couple of songs for Sanju [‘Main Badhiya Tu Bhi Badhiya’, ‘Bhopu Baj Raha Hai’] are the composers for Thackeray.

It is a grand beginning for ‘Saheb Tu Sarkar Tu’ and one does get an impression of a biggie outing for the big screen with the kind of orchestra that is put up. Moreover, the lead singer is just apt too, what with Sukhwinder Singh crooning the words written by Manoj Yadav. As expected, the song is all about glorifying Thackeray as the ‘messiah’ of the masses. Expect the song to arrive at a crucial juncture of the film’s narrative and bring on the dramatic appeal.

Next in line is ‘Aaple Saheb Thackeray’ which is written by Manndar Cholkar. This one is in fact a Marathi number and carries the signature tune that one has heard in the promo of the film. With the kind of beats that one associates with Marathi folk music, this one is rendered by Avadhoot Gupte and is again a situational outing. One wonders though why only the Marathi version appears in the soundtrack as it would have added on to the album had there been a Hindi version of the song as well.

Nakash Aziz is the lead singer for ‘Aaya Re Thackeray’ and given the kind of energy that the singer time and again brings in his songs, one expects the same here as well. Yet again, it is traditionally Marathi music that forms the basis for this song that is written by Dr. Sunil Jogi. While it is in line with the earlier two songs when it comes to the core theme and presentation, this one turns out to be far catchier and has a good recollection value going for it.

Last to arrive is ‘Thackeray Theme’ which is put together by guest composer Sandeep Shirodkar. It basically has a set of dialogues mouthed by Nawazuddin Siddiqui in the film with a base Western theme playing in the background. With the core theme of Thackeray supporting this near three minute composition, this one does make for a good impression and raises expectations from the film. Moreover, the intermittent sound of lion’s roar only adds on to the excitement.

Music of Thackeray is situational and should aid the film’s story telling. Though there isn’t anything memorable about it that would play on after the film’s exit from theatres, at least for its playing time it should do well.