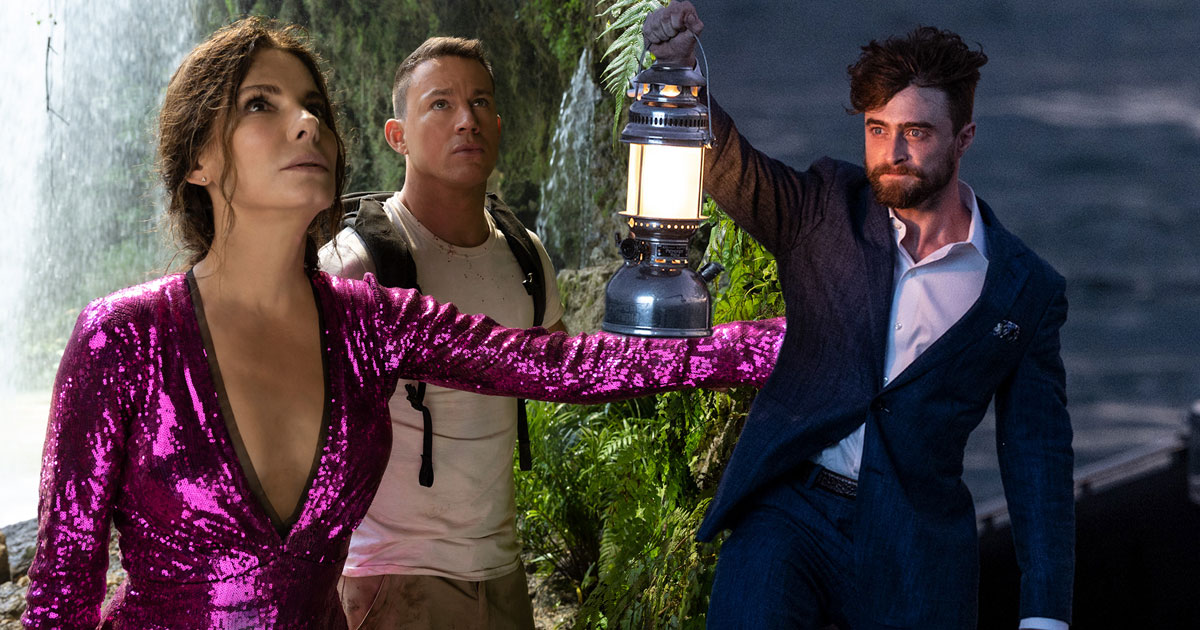 A new batch of The Lost City images are on the loose, and Brad Pitt is along for the wild ride. In the upcoming romcom, Sandra Bullock stars as a reclusive romance novelist, Loretta Sage, who was sure nothing could be worse than getting stuck on a book tour with her cover model (Channing Tatum), until a kidnapping attempt sweeps them both into a cutthroat jungle adventure, proving life can be so much stranger — and more romantic — than any of her paperback fictions.

Set for a March 2022 debut in theaters, this Romancing the Stone-like feature is directed by Adam and Aaron Nee, and also stars Patti Harrison, Da’Vine Joy Randolph, Bowen Yang, and Oscar Nunez.

The Lost City images aren’t holding anything back when it comes to showing Pitt’s anticipated cameo. In the photos shared by Entertainment Weekly, we find Pitt running behind Bullock and Tatum as the trio makes a narrow escape from an exploding vehicle. There’s also a wheelbarrow involved, though I suppose we’ll have to wait for more details as to why. The new images also give us a great look at Daniel Radcliffe, who plays a greedy billionaire on the hunt for lost treasure. In the photo, he’s sporting a bespoke suit and beard that have him looking like a GQ Magellan.

You can check out today’s The Lost City images below:

While speaking with EW about her new film, Bullock told the outlet that she and Tatum could be long-lost siblings.

“I don’t know if it’s because we’ve all been locked in our homes for so long, but if you can just sit in a room with someone and it’s quiet and just for no reason start laughing, and you know why the other one is laughing but you don’t know why the other one is laughing, it just makes things so much easier,” Bullock says about her uncanny connection with Tatum.

“So yeah, I think we were separated at birth at some point in some sort of neurological experiment on brain development. And he and I feel that theory holds because no matter where you throw us, we’re still the same.” Tatum adds, “By the way, we should just make this movie. Maybe we will one day.”

I’m suddenly excited by what this movie can bring to the table. It’s been a while since I’ve engaged with an honest-to-goodness romantic comedy, and I’ll jump at any chance to see Radcliffe play a self-centered villain. If you add Bullock, Tatum, and Pitt to that mix, I don’t see how we can miss the mark. Let’s go!