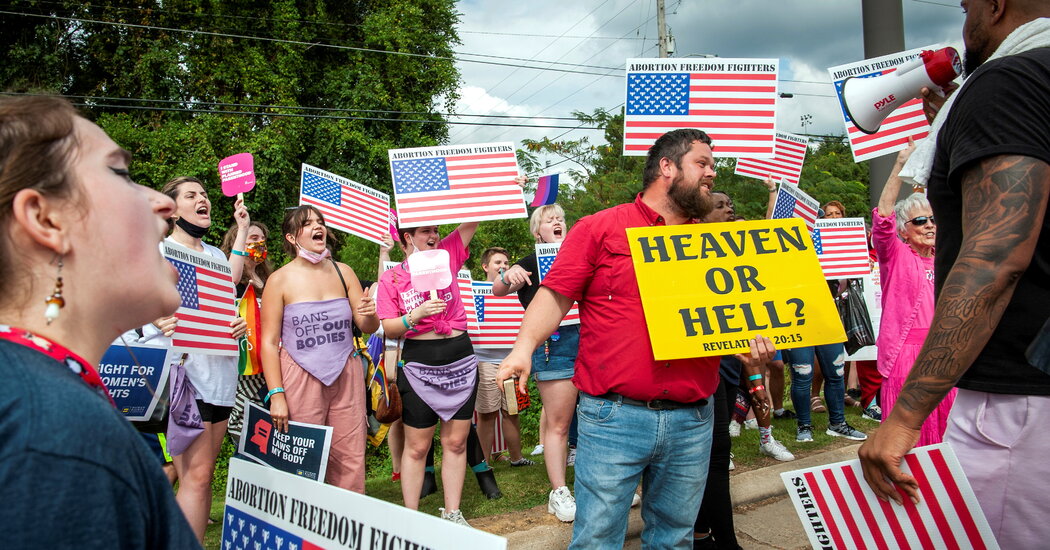 (Follow our live coverage of the Supreme Court oral arguments in the Mississippi abortion case.)

On Wednesday, the Supreme Court will hear arguments on a Mississippi law that is a direct challenge to Roe v. Wade, setting the stage for what could be the most consequential abortion rights ruling in decades.

The addition of Justice Amy Coney Barrett to the court in 2020 has strengthened the court’s conservative majority and energized the anti-abortion movement, which has long sought to overturn Roe, the 1973 decision that established a constitutional right to abortion and barred states from banning the procedure before fetal viability.

Here’s a guide to understanding what is in the law and what is at stake in the case:

What is in the Mississippi abortion law?

The Mississippi law that will be reviewed by the court makes most abortions illegal after 15 weeks of pregnancy, about two months earlier than Roe and later decisions allow. Most experts estimate fetal viability to be about 24 weeks.

The law was enacted in 2018 by the Republican-dominated Mississippi Legislature but never went into effect because of an immediate legal challenge that led to a federal appellate court blocking its enforcement.

The law bans abortions if “the probable gestational age of the unborn human” is determined to be more than 15 weeks, with narrow exceptions for medical emergencies or “a severe fetal abnormality.”

The state says that the fetus has made important physiological developments by 15 weeks, and that abortions are riskier to the mother at this stage of pregnancy. The Jackson Women’s Health Organization, which as the sole abortion clinic in Mississippi is at the center of the case, gave evidence to a federal appeals court showing that fetal viability is impossible at 15 weeks.

A federal appeals court said the state had not shown any medical evidence proving otherwise, affirming a lower-court ruling blocking the law and essentially saying that abortion is a right until a fetus is considered viable. If the law passed in 2018 were in practice, abortion providers who violated it could have their medical license suspended or revoked.

More than 93 percent of abortions in Mississippi in 2018 were performed before 14 weeks of gestation, and 75 percent were before 10 weeks, according to the most recent data from the Centers for Disease Control and Prevention.

Why is this case considered so important?

In recent years, Republican-controlled states have passed similar legislation only to have the laws struck down in appeals courts because they were in conflict with the precedent created by the Supreme Court. Those states, in effect, were vying for the chance to be heard by the court, especially after the retirement in 2018 of Justice Anthony M. Kennedy, a cautious supporter of abortion rights.

Mississippi’s appeal of the lower court ruling sat on the Supreme Court’s docket since the fall of 2020, about one month before Justice Barrett was confirmed to replace Justice Ruth Bader Ginsburg, who had died.

In May, the court, with its new 6-to-3 conservative majority, agreed to hear the Mississippi case, known as Dobbs v. Jackson Women’s Health Organization. (The state health officer, Thomas E. Dobbs, is the named petitioner in the case.)

In its brief to the Supreme Court, Mississippi asked the justices to overrule Roe and the court’s 1992 decision in Planned Parenthood v. Casey, which said states could not impose an “undue burden” on the right to abortion before fetal viability.

The court probably will not rule on the Mississippi case until June. If the justices were to approve the law, Roe’s viability standard would no longer be the law of the land. The Supreme Court has reversed its own positions on various legal issues dozens of times, including several in the 16 years since Chief Justice John G. Roberts Jr. was appointed in 2005.

How does this law compare with Texas’ new abortion law?

A new Texas law bans abortions once cardiac activity can be detected in the embryo. There is no heart at this stage of development, only electrical activity in developing cells that starts at about six weeks, before many women are aware they are pregnant.

The Texas law also, and crucially, forbids the state to enforce it. Instead, citizens are incentivized with suing anyone who performs abortions, or “aids and abets” them.

This unique formulation makes the law very hard to challenge in court because there is no single entity responsible for enforcement. Effectively, nearly all abortions in the state have been banned since the law went into effect.

The Supreme Court refused to immediately block the law but in an unusual move, the justices agreed to fast-track their consideration of appeals from the Justice Department and abortion providers in Texas. When the court heard arguments on Nov. 1, a majority of the justices seemed inclined to allow abortion providers — but perhaps not the Biden administration — to pursue a federal court challenge. It was not clear when the court would rule.

The Mississippi law does not use the citizen-enforcement approach and would be enforced by the state.

Mississippi abortion law. The court is hearing a challenge to a Mississippi law that bars most abortions after 15 weeks. The case could lead to the end of Roe v. Wade, the 1973 decision that established a constitutional right to abortion.

New York gun law. The justices will consider the constitutionality of a longstanding New York law that imposes strict limits on carrying guns in public. The court has not issued a major Second Amendment ruling in more than a decade.

How likely is it that the court will overturn Roe?

Many experts say that Roe faces its stiffest test, and that it is in peril. “Change is about to come with regard to abortion,” Elizabeth W. Sepper, a law professor at the University of Texas at Austin, recently told The New York Times. “I think they’re going to overrule Roe v. Wade.”

Many experts believe that the Supreme Court would not wait for a year to take the case only to strike down the Mississippi law and simply reaffirm what lower courts have already been doing in abortion cases for a long time. The justices have turned down other state appeals over pre-viability abortion bans.

It could also focus on other cases, like Casey, and find that the 15-week cutoff does not place an “undue burden” on those seeking an abortion. Such a ruling arguably would not represent a wholesale overturning of Roe.

But if the Mississippi law stands, the ruling could give states greater latitude to limit how and when abortions are performed.

What could happen after the ruling?

If the court moves to overturn Roe, about one dozen Republican-controlled states already have so-called trigger laws that would make abortion unlawful almost immediately. And more could follow quickly.

In Texas, for example, Gov. Greg Abbott, a Republican, signed a law in June that says nearly all abortions would become illegal in the state 30 days later if Roe is ever overturned. Doctors who then performed an abortion there could be sentenced to life in prison.

Conversely, 15 states and the District of Columbia have laws to protect abortion rights without Roe. Their policies usually bar the government from interfering with the right to obtain an abortion before viability, or to protect the health of the pregnant woman.

What do the law’s supporters and opponents say?

Attorney General Lynn Fitch of Mississippi, who is the state’s first female attorney general and the first Republican to hold the office since Reconstruction, acknowledges that she is seeking to overturn Supreme Court precedent. Ms. Fitch argues that while the justices have allowed state officials to protect women’s health and defend lives, they continue to prevent them from enacting laws on abortion.

“In these last 50 years, women have carved their own way to achieving a better balance for success in their professional and personal lives,” Ms. Fitch said in a statement. “By returning the matter of abortion policy to state legislatures, we allow a stunted debate on how we support women to flourish. It is time for the court to let go of its hold on this important debate.”

The Center for Reproductive Rights, which represents the Jackson clinic, says that a  reversal of Roe would leave large parts of the South and Midwest without access to legal abortions.

Pregnant women who cannot afford to cross state lines to get a legal abortion would attempt to end their own pregnancies, the center said, and put them and anyone who helps them subject to prosecution.

“For many, the barriers will simply be too high, and they will be forced to endure the substantial risks of continued pregnancy and childbirth,” it said in a statement.