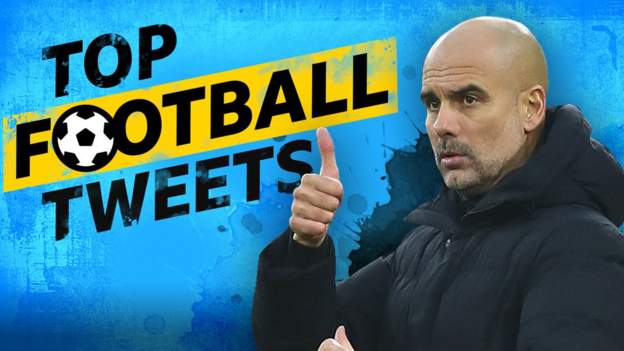 We’re only three days into 2022 and Manchester City have already been handed the Premier League title by some fans.

Liverpool and Chelsea knocked lumps out of each other in a thrilling 2-2 draw on Sunday which benefitted leaders Manchester City more than anyone.

Meanwhile, could Kylian Mbappe’s move to Real Madrid be a done deal, and a quiz question about Nottingham Forest and Sharon Stone was a 2021 highlight for one man.

Here are a few of the best tweets from the weekend’s football.

1. Man City win even when they’re not playing

Chelsea and Liverpool played out a thrilling draw but the real winners were a) the game of football and b) City.

With a 10-point lead at the top, last year’s champions look hard to catch.

Following that memorable clash at Stamford Bridge, Liverpool’s Sadio Mane and Chelsea’s Edouard Mendy shared a flight to the Africa Cup of Nations.

We wonder what they chatted about – the moment when Mane rounded Mendy to score or the moment when the striker could have been sent off for an elbow on Cesar Azpilicueta?

3. Say what you really mean

The Gunners dominated the first half but lost to a stoppage-time goal after going down to 10 men. Arsenal felt aggrieved by some of the decisions that went against them, including a penalty shout that was turned down before conceding one via VAR review.

We’ve also taken comfort in the steady dependability of Brentford claiming one big scalp per month.

They beat Aston Villa at home on Sunday, which means they may have filled their quota for January already.

Fans of Sharon Stone (or of Liverpool or Nottingham Forest) may remember the opening scene to 2006 film Basic Instinct 2 in which American actress Stone shared a raunchy car journey with former footballer Stan Collymore.

Nigel Clough also represented both clubs during his playing career, but, as far as we know, didn’t follow that up with a stint in Hollywood.

The PDC World Darts Championship is taking place at Alexandra Palace and a few famous faces have been spotted in the crowd.