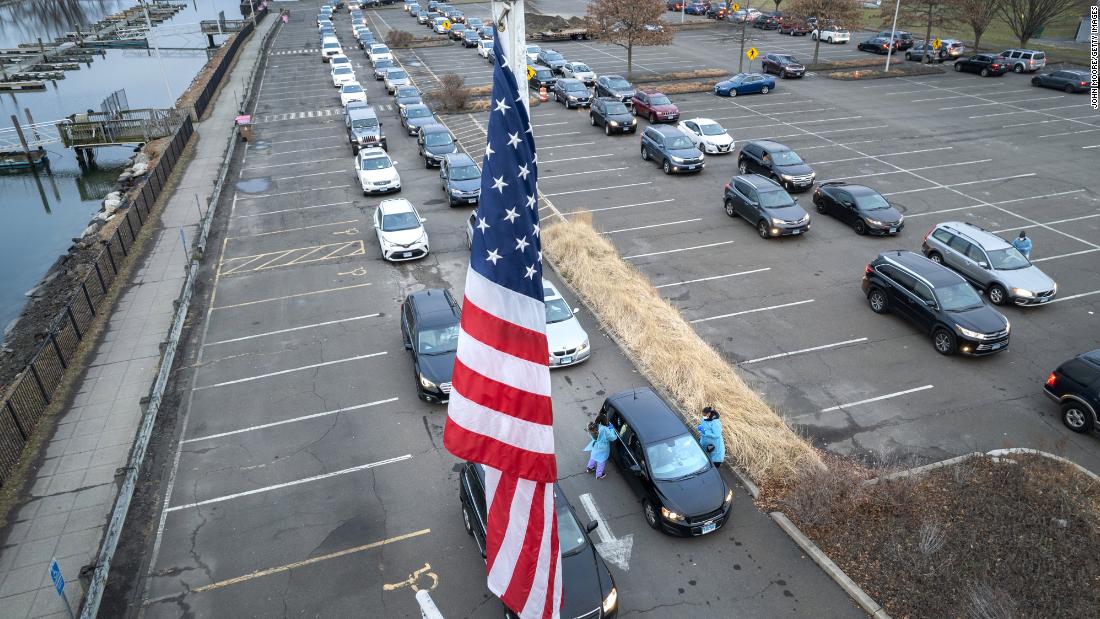 “What’s coming for the rest of the country could be very serious. And they need to be prepared.”

“Our health system is at a very different place than we were in previous surges,” emergency medicine professor Dr. Esther Choo said.

“This strain is so infectious that I think all of us know many, many colleagues who are currently infected or have symptoms and are under quarantine,” said Choo, associate professor at Oregon Health and Science University.

Don’t get a false sense of security with Omicron

Early studies suggest the Omicron variant may cause less severe disease than the Delta variant, which still makes up a considerable portion of US Covid-19 cases.

But because Omicron is much more contagious, the raw number of Covid-19 hospitalizations could get worse, Dr. Anthony Fauci said.

“When you have so many, many cases, even if the rate of hospitalization is lower with Omicron than it is with Delta, there’s still the danger that you’re going to have a surging of hospitalizations that might stress the health care system,” said Fauci, director of the National Institute of Allergy and Infectious Diseases.

And Omicron might be more problematic for young children, said Dr. Scott Gottlieb, former commissioner of the US Food and Drug Administration.

“It does appear now, based on a lot of experimental evidence that we’ve gotten just in the last two weeks, that this is a milder form of the coronavirus,” Gottlieb told CBS’ “Face the Nation” on Sunday.

“It appears to be more of an upper airway disease than a lower airway disease. That’s good for most Americans. The one group that that may be a problem for is very young children — toddlers — who have trouble with upper airway infections,” said Gottlieb, a current board member at Pfizer.

“This new strain could have a predilection, again, for the upper airway, which could be a bigger challenge in young kids, because of the way it binds to the airway cells.”

For the week ending December 28, an average of 378 children were admitted to hospitals every day with Covid-19, according to CDC data.

That’s a 66% jump from the previous week. It also breaks the previous record of 342 set during the Delta variant surge at the beginning of the school year.

“It may be the case in some school districts, where things are so raging right now in terms of Omicron for the next couple of weeks, and it may be prudent to delay things a couple more weeks,” said Hotez, dean of the National School of Tropical Medicine at Baylor College of Medicine in Houston.

“It’s going to be a very challenging time,” Hotez said. “People are going to have to be patient.”

In Georgia, at least five large Atlanta-area school districts will be starting class remotely this week.

“Our current plan is to resume in-person instruction on Monday, Jan. 10,” the school district said.

“All APS staff are required to report to their work location Monday, Jan. 3, for mandatory COVID-19 surveillance testing, unless they are ill. The data collected from staff testing will be used for future planning.”

APS said the goal is to allow students and staff to be tested and to isolate and quarantine as needed, according to CDC and health department guidelines.

Four other nearby school districts — in Fulton County, DeKalb County, Rockdale County and Clayton County — announced they would have temporary remote learning following the holiday break.

Across the country, the rapid spread of Omicron variant has impacted businesses, transportation and emergency services.

“What I am so worried about over the next month or so is that our economy is going to shut down — not because of policies from the federal government or from the state governments, but rather because so many of us are ill.”

In Ohio, the mayor of Cincinnati declared a state of emergency after a spike in Covid-19 infections led to staffing shortages in the city’s fire department.

The mayor said if the problem goes unaddressed, it would “substantially undermine” first responders’ readiness levels.

And thousands of flights have been canceled or delayed as staff and crew call out sick.

While Americans who have been fully vaccinated might get infected with Omicron, they are less likely than the unvaccinated to get seriously ill, health experts say.
Doctors across the country say most people hospitalized for Covid-19 are unvaccinated.

“What we’re seeing is that our vaccinated patients aren’t getting sick, and our frail, multiple comorbidities-vaccinated patients do need admission, but their admissions are shorter and they’re able to leave the hospital after several days,” said Dr. Catherine O’Neal, chief medical officer at Our Lady of the Lake Regional Medical Center in Baton Rouge, Louisiana.

“Our unvaccinated patients are the sickest patients,” she said. “They’re the patients most likely to be on the ventilator.

Despite a year of calls from public health experts to get vaccinated — and now boosted — only about 62% of the US population is fully vaccinated, according to US Centers for Disease Control and Prevention data.

And about 33.4% of those who are fully vaccinated have received their booster doses, the data shows.

“If you’re unvaccinated, that’s the group still at highest risk,” said Dr. William Schaffner, a professor at Vanderbilt University Medical Center. “The adults that are being admitted to my institution, the vast majority continue to be unvaccinated.”