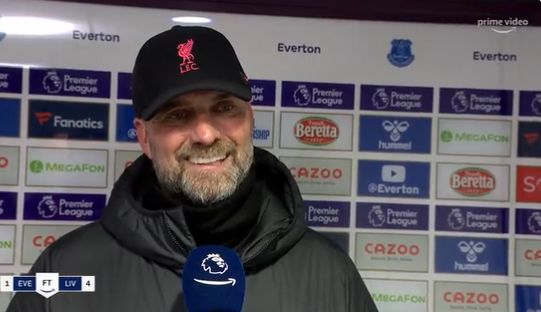 Liverpool manager Jurgen Klopp heaped praise onto Mohamed Salah’s work rate as he forced the error for his second goal against Everton.

The Reds won 4-1 at Goodison Park on Wednesday night, with Salah continuing his sensational form this season with a brace in the Merseyside Derby.

Klopp spoke about Salah’s work rate on the second goal, comparing it to the error that also gifted Manchester United their goal away to Chelsea at the weekend.

See below for Klopp’s post-match interview in full, with the German tactician also discussing the mental hurdle of playing at Goodison Park again after Virgil van Dijk’s season-ending injury there last term…

??”It was for sure the best performance we showed – since I’ve been at Liverpool – at Goodison.”