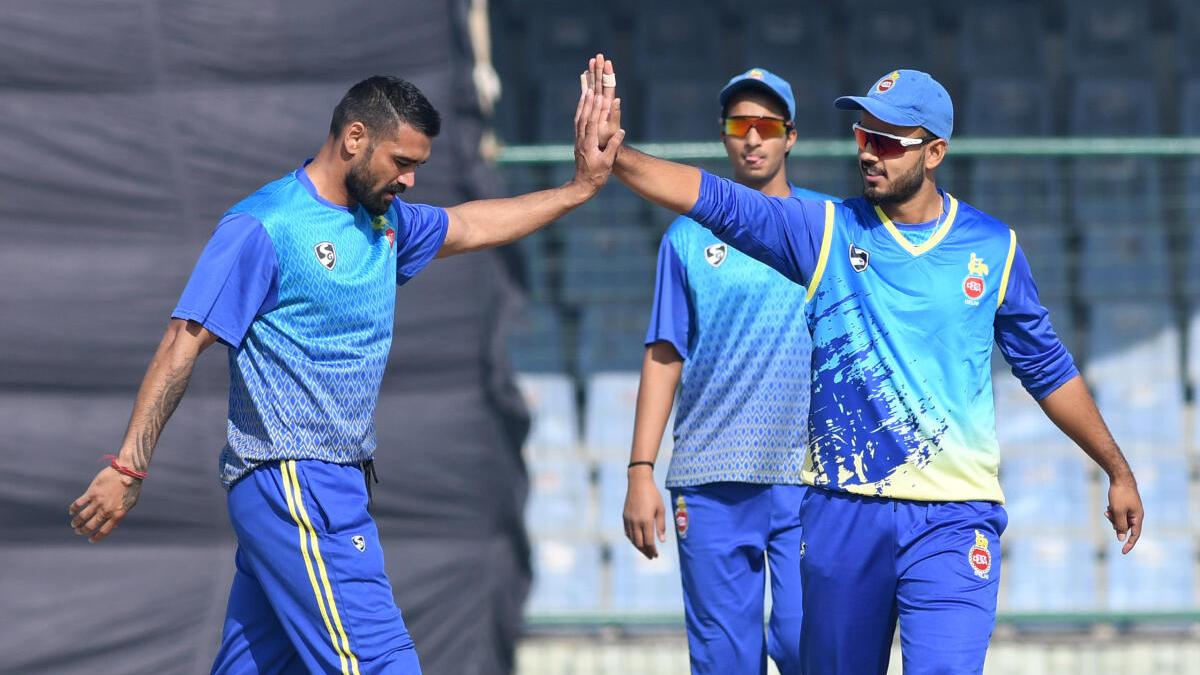 Shivam Chauhan was sitting quietly at one end of the Sector 16 Stadium on Sunday evening. A few minutes ago, a brilliant diving catch at point by Himmat Singh off a Mayank Yadav delivery saw Shivam return to the dugout, after playing a gritty knock of 107 off 136 balls.

Those were anxious moments at the Haryana camp. It was getting colder and darker, with the ground officials rushing to turn on the floodlights. And, chasing 268, Haryana still needed 12 runs with five wickets in hand in a must-win Vijay Hazare Trophy fixture against Delhi.

Spearheaded by captain Pradeep Sangwan, who claimed a five-for, Delhi bowlers had other plans. Against a nervy and inexperienced Haryana lower-order, Delhi picked the last five wickets for just one run to script a dramatic 10-run victory.

Soon after Chauhan fell, Sangwan tempted Ajit Chahal (6) to offer a catch to Lalit Yadav at long-off. In the next over, Delhi tightened the noose with young Mayank dismissing Mohit Sharma for a duck and followed it up with a run-out of Nitin Saini off the next delivery.

From 256-5, Haryana was suddenly struggling at 256-8 and as a dejected Shivam – watching the proceedings from the dugout – shook his head in disbelief, Sangwan destroyed the tail in the final two deliveries of the last over and helped Delhi grab two points.

It was a harakiri by Haryana, which earlier rode on Shivam’s century and Pramod Chandila’s 78 to fight back, despite losing three quick wickets early in the chase. A natural stroke-player, Chauhan targetted Mayank with a flurry of drives, and scoring boundaries off the spinners as well. The two forged a 166-run stand, before Sangwan trapped Chandila leg before. In the next over, Chauhan too fell, thus leading to a debacle.

Earlier, winning the toss, Haryana made early inroads with Mohit Sharma (2-53) rattling the Delhi top-order with his disciplined bowling in the opening spell.

In the penultimate delivery of his first over, Mohit cleaned up the off stump of Vaibhav Kandpal, who replaced Dhruv Shorey as the opener, for a duck. The stump-to-stump bowling approach helped Mohit, who hasn’t played international cricket for the last six years. In his second over, the pacer’s perfect length delivery kissed the stumps, dismissing Himmat Singh for one.

With the team reeling at 3-2, India international Shikhar Dhawan, too, looked jittery and struggled to only score 18 off 42 deliveries. His misery ended when he chopped a ball onto his stumps off leggie Yuzvendra Chahal. Kshitiz Sharma (17), too, was removed by Chahal, offering a catch to Ankit Kumar.

However, Delhi rebuilt with Jonty Sidhu scoring an unbeaten century (100 off 100 balls), and stitching a 145-run alliance with Lalit Yadav. With the team struggling till the 17th over, Sidhu and Lalit took 15 more overs to add 53 runs and cross the hundred-run mark for the side.

After the dismissal of Lalit, Delhi needed some quick runs late on and Anuj Rawat’s 16-ball 44 did the job.