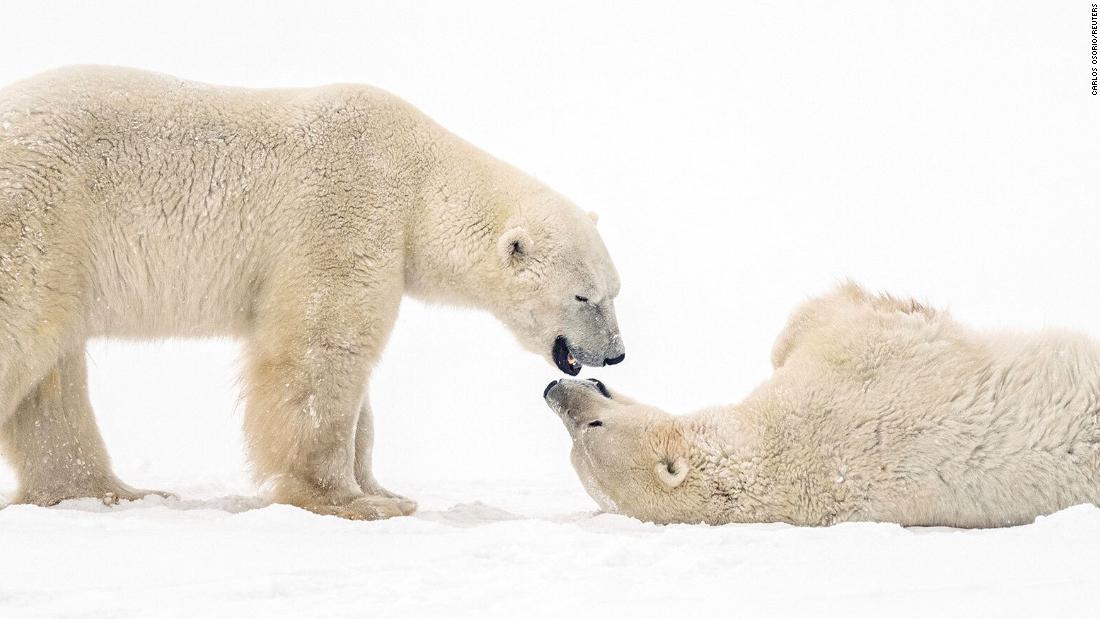 A polar bear seeks shelter from a looming blizzard outside the town of Churchill, Manitoba.

There are no roads leading to the tiny Canadian town of Churchill, which sits near the northeast tip of Manitoba.

But that doesn’t stop thousands of tourists from taking a train or a plane and visiting every fall.

That’s because in this area, near the shores of the Hudson Bay, you can go out on a tour and get a glimpse of the world’s largest land carnivore: the polar bear.

The Churchill region is one of the southernmost places you’ll find polar bears. These bears spend most of the year on the Hudson Bay ice, hunting for seals. But when the ice melts in the summer, they have to come ashore for a few months.

Sometimes, the bears wander near town.

“During bear season, (locals) say that’s pretty common,” said photographer Carlos Osorio, who visited Churchill earlier this month. “I asked people this question a lot, too, because I was super interested: ‘Hey, how common are bears in town?’ I asked the taxi driver who drove me from the airport to my hotel and he said: ‘Oh, we just had a bear in town last night. He was like right there on the corner.’ ”

In Churchill, there’s always the possibility of a polar bear encounter; it literally comes with the territory.

But the town has taken steps to reduce risks.

There is a “bear patrol” with staff members who monitor the area. There’s a 24/7 hotline that people can call to report a sighting: 675-BEAR. The town has also started to test a new radar system, or “beardar,” to warn of approaching bears.

Attacks have been rare. The last one was in 2013, according to the Reuters news agency, and there hasn’t been a fatal attack since the early 1980s.

Wind-swept spruce trees are illuminated by a vehicle’s light during a blizzard in Churchill.

This aerial photo shows some ice around Churchill. The Hudson Bay, however, wasn’t frozen yet.

Only about 900 people live in Churchill, but those who do know to stay aware and be prepared at all times. There’s also a custom of leaving car doors unlocked, just in case someone is outside and needs to quickly find protection from a bear.

“You just have to be careful,” Osorio said. “You can’t be anywhere by yourself. You have to have a vehicle or someone with you or some means of scaring a bear.

“Some people carry shotguns and fire whatever guns they have into the air. But if you don’t have a gun permit, then you could just fire off ‘bear bangers,’ which are basically like really loud cap guns with a little flare on them. That’s how you scare the bear away if you get caught in a predicament like that.”

Scaring away the bear is the first tactic that the bear patrol will use if they see a bear getting close to town. If that doesn’t work, they’ll use rubber bullets or a paintball gun to persuade the bear to move on.

If the bear persists, they’ll try to use live bait to trap the bear or shoot it with a tranquilizer gun. Then it’s off to “bear jail,” or the Polar Bear Holding Facility.

There, inside an old aircraft hangar, the bear receives a health checkup and a tracker before it is eventually released back in the wild.

Bear season peaks in October and November, just before the Hudson Bay refreezes. This is when bears begin migrating north and congregating near the shore. It’s also when tourists have their best chance of seeing the bears.

But in recent decades, bear season has been lasting longer and longer because of climate change. The ice is melting sooner and freezing later, keeping the bears on land for weeks more.

Osorio noticed during his trip this month that “all the businesses, all the gift shops, everything’s starting to close down because technically bear season is over. But because the ice hasn’t frozen, the bears are still there.”

A longer bear season means a shorter hunting season — while on land, the bears subsist on their fat reserves — and that has had a dramatic effect on the bear population over the years.

According to the conservation group Polar Bears International, the hunting season for the local bear population is three to five weeks shorter than it was in the early 1980s, and the population has decreased by 30%. There has also been research showing that the bears are smaller than they used to be.

While he was in Churchill, Osorio hired a tour guide to drive him around the area and look for polar bears to photograph.

They were about 20 minutes out of town when they came across two bears sparring, or play fighting, with each other.

“When I saw these guys playing and laying down and rolling around, it reminded me so much of my dog, and it was awesome,” said Osorio, who spent hours watching the two bears wrestle before the wind started picking up. When Osorio left, the bears had decided to lie on the ground, hunker down and wait out an incoming storm.

Osorio said he enjoyed his trip to Churchill despite enduring a blizzard and wind chill temperatures that dropped to minus 20 degrees Celsius (minus 4 degrees Fahrenheit).

He encourages people to visit — and not just during bear season.

“There’s so much more in Churchill to do than just see polar bears,” he said. “The people are super friendly, everybody in town is super nice. But then there’s also beluga whales that congregate in the bay. It’s one of the best places for birding. You get to see the Northern Lights like almost every night of the year.